The Charlie Hebdo attack and a thousand other provocations are awakening Europe’s crusading spirit. 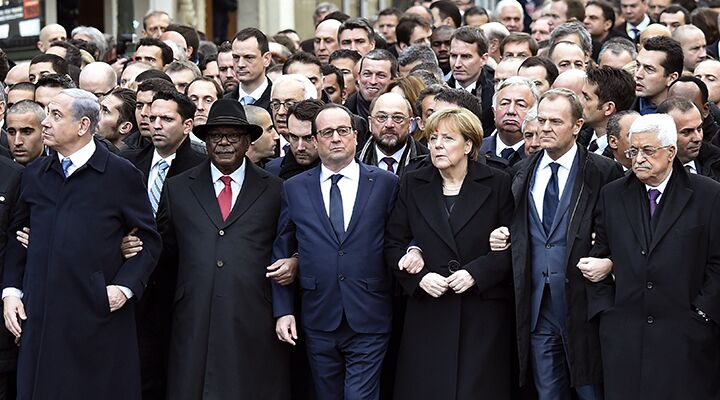 The Charlie Hebdo attack and a thousand other provocations are awakening Europe’s crusading spirit.

There are cities and suburbs in France, Germany, Britain and other European countries that look, sound and smell more like Riyadh or Damascus. Islamic communities are expanding across Europe that are choosing not to integrate, and instead are establishing Muslim culture in their host nations.

In some cities, minarets are as common as steeples. In some communities, the law is sharia. More than a few cities in Western Europe have “no-go” neighborhoods that are simply too dangerous for native Europeans to venture into.

Within Europe’s Muslim communities exist pockets of radicalized Islamists. Generally male, young and unemployed, these men are easy targets for foreign and sometimes local terrorist organizations and radical preachers. Fed a steady diet of hatred and vitriol for America, Israel and the West, these thousands and thousands of young men are a terrorist army waiting for a job.

Some have already found one. In the last 3½ years, Europe has suffered six major terrorist attacks and multiple smaller incidents, and many others have been thwarted. In November 2011, the headquarters of satire magazine Charlie Hebdo was firebombed after the magazine featured a caricature of the prophet Mohammed. In March 2012, radical Islamist gunmen linked to al Qaeda killed three Jewish children, a rabbi and three paratroopers. In May 2013, two terrorists decapitated a British soldier on the streets of London. In May 2014, a man linked to the Islamic State gunned down four people at the Jewish museum in Brussels.

In January, in the worst terrorism in France to date, five attacks occurred in the Île-de-France region, including Paris. In what was clearly a well-planned attack, masked gunmen stormed the offices of Charlie Hebdo. Shouting “Allahu Akbar!” the two men fired 50 rounds, murdering 12 people and injuring 11 more. The next day, another terrorist with apparent links to the Charlie Hebdo attackers took more than a dozen hostages at a Jewish convenience store. All totaled, 17 people were killed and more than 20 injured.

Masked gunmen stormed the offices of Charlie Hebdo, murdering 12 people and injuring 11 more. The next day, another terrorist took more than a dozen hostages at a Jewish convenience store.
Afterward, Europol director Rob Wainwright told Sky News, “We are dealing with a very serious threat spread around many European countries and propagated by thousands of suspects radicalized on the Internet and through conflict experience in Syria and Iraq. It is clearly an urgent and serious challenge we face now. The scale of the problem has increased over the last 10 years.”

But let’s look back more than 10 years. Students of history should be very attentive when seeing friction between Catholic Europe and Muslims. These two entities have repeatedly clashed in some of the deadliest, most savage battles ever.

One battle in particular casts light on the present Muslim incursion into the heart of Europe: the Battle of Tours-Poitiers. This a.d. 732 encounter on a small road about 200 miles south of Paris was a turning point in world history.

Why take time to consider modern Europe in the context of eighth-century Europe? Because the forces that made Tours-Poitiers inevitable are the same forces that are churning in Europe right now.

Another defining battle between Islam and Catholic Europe is imminent.

Prior to 732, the Saracens, or Mohammedans, had conquered the southern shores of the Mediterranean and erected Muslim civilizations across the underbelly of Europe. Muslim peoples inhabited territory from Palestine, Syria and Egypt in the east, across North Africa, all the way to Morocco.

By the late seventh century, under the Umayyad Caliphate, the armies of Islam had conquered large parts of Spain and Portugal. But Spain was merely a pit stop. The goal of the caliphate was to cross the Pyrenees, defeat the Franks, and take mainland Europe. Why? Because Islam’s goal always has been—and still is—to convert everyone in the world, kill them, or die trying.

By the third decade of the eighth century, Muslim ambition—hot, focused, menacing, and with decades of momentum behind it—was ready to make its move. Invading Muslim armies streamed from Spain into France to conquer the region of Aquitaine, then use it as a launching pad into the rest of Europe.

Another defining battle between Islam and Catholic Europe is imminent.
The Umayyad’s ambition was stymied only after it met the army of Charles Martel, king of the Franks and grandfather to Charlemagne. The army of Umayyad leader Abdul Rahman al-Ghafiqi was defeated, and the Muslims retreated.

The Battle of Tours-Poitiers shoved Islam from Europe and secured Europe’s future as a Catholic continent.

If the outcome of Poitiers had been different, wrote historian Edward Gibbon, perhaps “the interpretation of the Koran would now be taught in the schools of Oxford, and her pulpits might demonstrate to a circumcised people the sanctity and truth of the revelation of Mohammed” (The Decline and Fall of the Roman Empire).

That observation stands. Yet look again at Europe today—and see how many universities do teach koranic interpretation, and how many European places of worship preach Mohammed.

You don’t hear much about the Battle of Tours-Poitiers anymore. It has largely been buried under masses of revisionist, politically correct, multicultural gibberish. Muslim imperialism is a taboo subject because of fear of being ostracized, prosecuted, stabbed or bombed—or igniting a global wave of riots on the Muslim street. This spirit of appeasement, plus a willing ignorance of history, prevents Westerners from considering where the obvious Muslim-European rift might end.

But the truth is, Islam today, much like it was under the Umayyads, is an imperialist entity.

More than 3,000 terrorists have returned to Europe after traveling to the Middle East to fight for the Islamic State. European police have arrested dozens of returning fighters, in many instances only after foiling a terrorist attack. In February, Islamic State documents were discovered that revealed that organization’s desire to use Libya as a launching pad into southern Europe, where it would conduct attacks in European cities and attack maritime shipping.

The armies of Islam are on the march! The forces that made the Battle of Tours-Poitiers inevitable have returned. The same ideology and religious motivations that underpinned Arab imperialism in a.d. 732 are again flourishing. Islam and its doctrines are thriving globally: It is one of the fastest-growing religions in the world, including in many Western states. Individual Islamic movements, even radical ones, have gained massive momentum. Muslim leaders and followers, including many of the so-called moderates, freely and regularly call for the destruction of Western civilization and the construction of a global Islamic caliphate.

The major difference is that today, those forces run deeper and more intensely than they did in 732!

Forty percent of Rotterdam is Muslim. In Belgium, the most popular boy’s name is Mohammed—as it is in major cities across Europe. The demographic incursion of Muslims into Europe makes the forces at play worse for Europe than at the time of Poitiers: In a.d. 732, Muslims lacked a meaningful presence in the heart of Europe, which meant they had little demographic and military infrastructure to draw upon during their northward incursion. Today, the armies of Islam can count on support, or at least sympathy, from millions of devoted, disgruntled and alienated Muslims living in free, open, vulnerable cities across the Continent!

The lesson from the attacks in France, the cartoon crisis, the murder of Theo van Gogh, the ongoing construction of minarets on the European skyline, and hundreds of other pinpricks against Europe’s Catholic establishment, is painfully evident: European Muslims have not integrated into European culture and society; they exist as a separate, opposing force within their host nations. And Islam’s sights are once again set on Europe!

The critical history of Poitiers is repeating itself. Conditions are similar, and the strategy of today’s Muslim leaders has barely altered from that of Muslim caliphs in the Dark Ages. The religious and ideological motivations are identical.

Even the geographic positioning for invasion is largely the same: Since World War i, the demise of British and European colonies in the Middle East and North Africa has left the soft underbelly of Europe vulnerable to Islamic invasion. Now radical Islam permeates the territory from Pakistan in the east to Morocco in the west, and the region is again being exploited as a launching pad into Europe!

One big difference is that Muslim invaders have more than the humble sword at their disposal: Today they have access to some of the most sinister and deadly technology available to man. In addition, they have a host of Muslims inside Europe to draw upon.

Looking at the Islamist terrorist attacks that are almost routine in Europe, and the terrorist networks, and the growth of Muslim communities, and the number of European Muslims who sympathize with the Islamic State, it’s impossible to view these as small, isolated outbursts. Something larger and more dangerous is afoot. The armies of Islam—powerful and menacing, motivated and eager, ambitious and emboldened by their dominance of the underbelly of Europe—are seeking conflict.

They want a second chance at the Battle of Tours-Poitiers—another opportunity to set up a Muslim caliphate in Europe!

Charles Martel was the Frankish general responsible for halting the Muslim incursions into France. He was a courageous and fierce leader, a man with the vision to realize that unless he stopped Abdul Rahman al-Ghafiqi and his warriors, Europe’s future as a Catholic continent was at risk. During the battle, Charles was a beacon of bravery, and it is said that this was where he was given the name Martel, a derivative of marteau, the French word for hammer.

After he pulverized the Saracens, Charles the Hammer was viewed throughout Europe as the king of the Franks and the champion of European Catholicism. After he died, his legacy as the protector of Catholicism grew as his progeny picked up the mantle and advanced his achievements and conquests.

Even today, many of Europe’s prominent leaders and citizens admire, respect and seek to pattern European unification after the work of Charlemagne, the powerful, ruthless emperor of the Holy Roman Empire and grandson of Charles the Hammer.

Bible prophecy says that a new Hammer will soon emerge in Europe, and that bloody history between Catholic Europe and Muslim incursion will repeat on a huge scale. With radical Islam posing a massive threat, begging for conflict, this powerful European leader, in conjunction with the Vatican, will resurrect the spirit that empowered Charles Martel at the Battle of Tours-Poitiers.

In a.d. 732, the fate of the world pivoted on a single battle waged on a small road about 200 miles south of Paris. Today we are about to relive that battle—and once again, it will prove to be one of the most decisive battles in history.