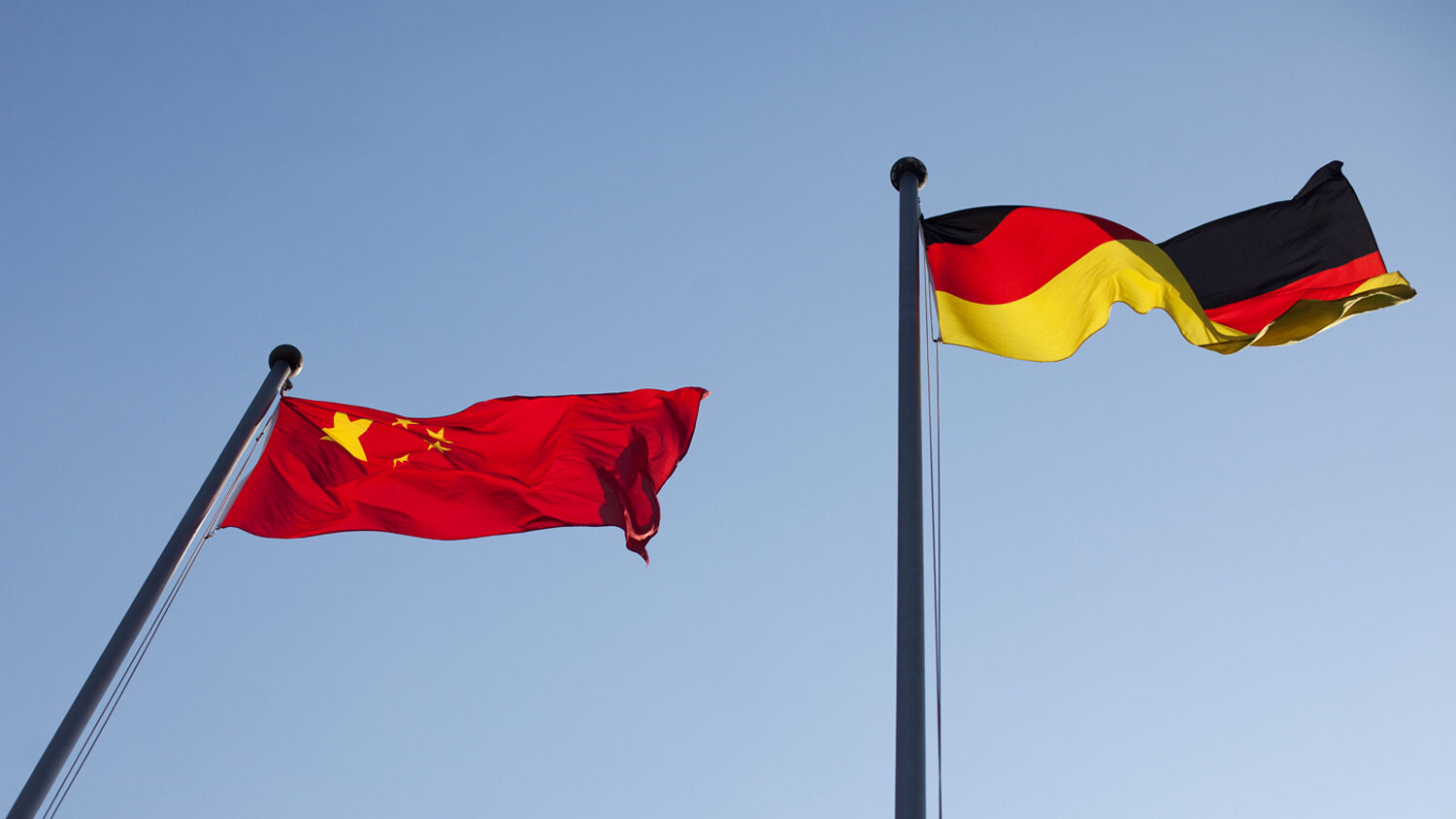 A report released by the Foundation for the Defense of Democracy (fdd) on October 14 analyzes Beijing’s “Made in China 2025” (mic2025) plan first announced in 2015. The report sheds light on the details of China’s strategy to economically take over Europe. And the linchpin of China’s plan for a European economic empire is Germany.

Emily de la Bruyere, the report’s author, said that China sees Europe as the “battlefield for what they diagnose to be a third world war.”

“China sees Germany as the linchpin in that battle,” she said. “If China can win Germany, it can win Europe. It can win the world.”

mic2025 is the first stage in a three-part economic project intended to turn China into a “manufacturing great power.” As the second-largest economy in the world, China already is a leader in global manufacturing. But for the Chinese government, like the athletes going to Beijing’s Winter Olympics in a couple of years, second place isn’t good enough.

The Chinese intend on gaining an advantage not necessarily through direct competition with other countries but rather through cooperation. This involves undertaking joint ventures with foreign corporations in order to increase foreign nations’ dependencies on the Chinese economy, coerce the international community to adopt Chinese standards in trade and technology, and catch up technologically with other countries both through forcing them to give up their trade secrets and through intellectual property theft.

But both America and Japan, the world’s first- and third-largest economies respectively, aren’t on the best terms with China. Both economic behemoths have interests in the Chinese economy but also distrust Beijing severely and have been trying to disengage from the Chinese economy in recent years.

So that leaves China with the fourth-largest economy in the world: Germany.

In its bid to gain power and global influence, the Chinese Communist Party (ccp) seeks not only to acquire foreign technology, but also to secure industrial control. Cooperation with German industry lies at the heart of this strategy. … Germany is, in fact, a template for the ccp strategy to dominate the 21st-century economy and set the rules for the modern world.

What are the specific methods China uses to achieve this end? “mic2025 targets Germany first as a source of technology, second as a partner through which to export standards favorable to China, and third as a competitor for the lead in the current industrial revolution.”

The Sino-German economic partnership is not a new one. Volkswagen formed an arrangement with Shanghai Automotive (today saic Motor) in 1984, the first international joint-venture in the automotive industry allowed by the Chinese government. Siemens entered the People’s Republic of China a year later (though it had been doing business in China since the days of the kaisers).

Today, China and Germany have a robust economic relationship. 2017 saw China directly invest more into Germany than any other country in Europe; in 2018, Germany was second only to Luxembourg. This investing targets some of Germany’s most profitable and established corporations. In 2018, Siemens and Shanghai Electric entered a partnership where Siemens agreed to supply Shanghai Electric with the technology and training related to constructing gas turbines; once Shanghai Electric had its gas turbine industry up and running, it abruptly terminated its agreement with Siemens, leaving the German company out in the cold.

That same year, the Chinese automotive company Geely purchased just under 10 percent of Daimler (the parent company of Mercedes-Benz), a small enough amount to fly under the radar of Germany’s investment-review mechanism, normally triggered by ownership stakes 10 percent and above.

Huawei, the Chinese telecommunications giant, relocated its European headquarters from the United Kingdom to Germany in 2007 and quickly entered a partnership with Deutsche Telekom. Huawei in 2015 pledged to invest €400 million (us$474 million) into Germany, was approved to create a 5G base station in 2018, and entered a partnership with the municipality of Duisburg to create the first “European smart city project.” Duisburg, the biggest inland port in the world, has agreed to use Huawei technologies to develop the “Rhine Cloud,” a digital server meant to amplify Duisburg with “smart government, smart port logistics, smart education, smart infrastructure, 5G and broadband, smart homes and urban loT.”

Huawei has come under United States sanctions for allegedly using its technologies to spy on foreign nationals. While Great Britain and France have publicly condemned the company and are phasing Huawei out of their 5G systems, Germany has been reluctant to do so.

China is investing so heavily into Germany partly because Germany, with its massive economy and population, is seen as the unofficial leader of the European Union. China knows that little gets done in Brussels without Germany giving its consent. If Germany can get economically entangled in a Chinese web, then Beijing can hold the reins of the entire EU.

China also knows that Germany, being the economic dynamo it is, is an important competitor and is anxious to make sure that Germany does not overtake its economic influence. Both China and Germany are well known for weaponizing their economies against economically weaker states: Consider how China trapped Sri Lanka and how Germany trapped Greece.

However, the Sino-German economic relationship isn’t one-sided. In 2019, the value of goods Germany exported to China was almost €100 billion ($118.6 billion). This makes Germany—just one country among 27, which includes economically influential countries like France and Italy—responsible for over half of the money the EU gets from trading with China. China has been Germany’s largest trade partner for several years now.

Germany knows that China’s intentions in investing into Germany aren’t altruistic. A German intelligence report in 2018 stated that China was attempting to “influence every level of German government, society, and business,” according to Axios. However, an unnamed German government official tried to keep the report secret so that business ties with China weren’t damaged.

According to the Axios article, German Chancellor Angela Merkel did have access to the report; she must have been fine with the cover-up, as she let the report stay a secret to the rest of her government.

Then there is also the question of China’s human rights abuses. Germany has come under a lot of pressure to cut back its trade with China due to the genocide of the Uyghurs in the Xinjiang province and the crackdown on pro-democracy protesters in Hong Kong. In an interview with Politico, German Minister for Economic Affairs and Energy Peter Altmaier said: “I have always been convinced and I still believe that change can be achieved through trade,” regarding the idea that by continuing to trade with China, Germany is letting the Chinese government get away with its nefarious activities.

Altmaier claims that opening up China to Western markets would keep its relations with the West amicable and therefore encourage it to be peaceable. But while Germany has no problem with sanctioning other dictatorships like Russia and Belarus—states with far weaker economies—China somehow gets a free pass.

Somehow, the EU—with Germany arguably its most influential member state—cannot come together on trade deals with America and post-Brexit Britain (democracies and nato allies), but Germany can claim that it is encouraging a genocidal dictatorship to change its behavior by doing business with it while the rest of the world condemns China’s actions.

Germany has always had an interesting relationship with the Communist world. Imperial Germany was the first country to recognize the legitimacy of the Bolshevik takeover in Russia when it signed the Treaty of Brest-Litovsk with representatives of Vladimir Lenin’s government in 1917 during World War i. The 1922 Treaty of Rapallo was officially about Weimar Germany and the Soviet Union renouncing territorial claims on each other. But it included secret provisions allowing Germany to train its military, a military that was nominally under the shackles of the Treaty of Versailles, deep in Soviet territory, where Britain and France couldn’t watch. In 1939, Adolf Hitler and Joseph Stalin agreed to divide Eastern Europe between themselves in the Molotov-Ribbentrop Pact. The Nazi and Soviet armies cooperated with each other in the invasion of Poland.

After World War ii, West Germany became more hostile to the Communist world once the Soviets installed a Communist satellite state in East Germany. But now that a divided Germany is history, Berlin need not be so unfriendly.

In fact, both China and Germany have a lot to gain from strengthening economic ties with each other, even if both have reasons to be suspicious of a relationship.

The reason for that is because both want to overtake the world’s number one economy: the United States.

U.S. President Donald Trump has been quite vocal about the unfair trade relationships between America and both China and Germany. Both countries are being marginalized by the current administration in Washington. Both are tired of playing America’s game and want to play by their own rules.

And both want America to knuckle under these new rules.

Bible prophecy tells us that these two economic behemoths will come together against the United States in the very near future.

The book of Isaiah was written primarily for the “last days,” or the time just prior to the coming of the Messiah (Isaiah 2:1; 30:8). A prophecy in Isaiah 23 is all about what is happening in China and Germany today: “The burden of Tyre … from the land of Chittim it is revealed to them. Be still, ye inhabitants of the isle; thou whom the merchants of Zidon, that pass over the sea, have replenished. And by great waters the seed of Sihor, the harvest of the river, is her revenue; and she is a mart of nations” (verses 1-3).

The spiritual center of the Holy Roman Empire [a world-conquering resurrection of the Roman Empire that has risen and fallen throughout history, and is forming one last time in Europe, centered in Germany] is called Babylon in your Bible (Revelation 17:5; 18:1-3). But here in Isaiah, the Bible refers to Tyre (and its allies Zidon, etc) as the commercial center of this European power. By understanding the spiritual and the commercial powers, you can understand what a colossus is rising in Europe. …

Chittim (verse 1; biblical Kittim—Genesis 10:4) gave birth to the land of Chaldee, or southern China. China and Japan were prophesied to be powerful nations in this end time …. They are trading mightily with the Holy Roman Empire ….

[We] believe there may be a brief alliance between the Holy Roman Empire and certain Asian powers (Russia, China, Japan—the kings of the east).

This alliance won’t end well for America. Deuteronomy 28 details God’s covenant with the ancient Israelites, specifically the blessings He would bring to the nation if it obeyed Him and the curses if it disobeyed Him. Like Isaiah 23, Deuteronomy 28 is for our time today; specifically, for the descendants of those ancient Israelites, the American and British peoples (to prove this, request our free book The United States and Britain in Prophecy, by Herbert W. Armstrong).

Mr. Flurry writes about this verse in his book Ezekiel—The End-Time Prophet:

For many years, Mr. Armstrong said the siege prophesied in verse 52 symbolized America’s economy being battered by foreign competition …. The Holy Roman Empire, along with the kings of the east (the Asian nations), will cause economic problems and bring on destruction in many ways …. “In all thy gates” refers to a trade war. …

[T]his emperor [will be] cooperating with the Russians and the Chinese to besiege the Anglo-Saxon nations economically.

Many feel that this global economy is too interconnected for America, Germany and China to turn on each other in a meaningful way. But America was at war with both within living memory. And America is going to have both of them as enemies one more time, as economic enemies, and then the German-led Holy Roman Empire as a full-on military invader. To learn more about this coming mammoth trade bloc and what it means for America, please order our free booklet Isaiah’s End-Time Vision; Chapter 7 is especially relevant. Also request our free reprint article “The Great ‘Mart of Nations.’”