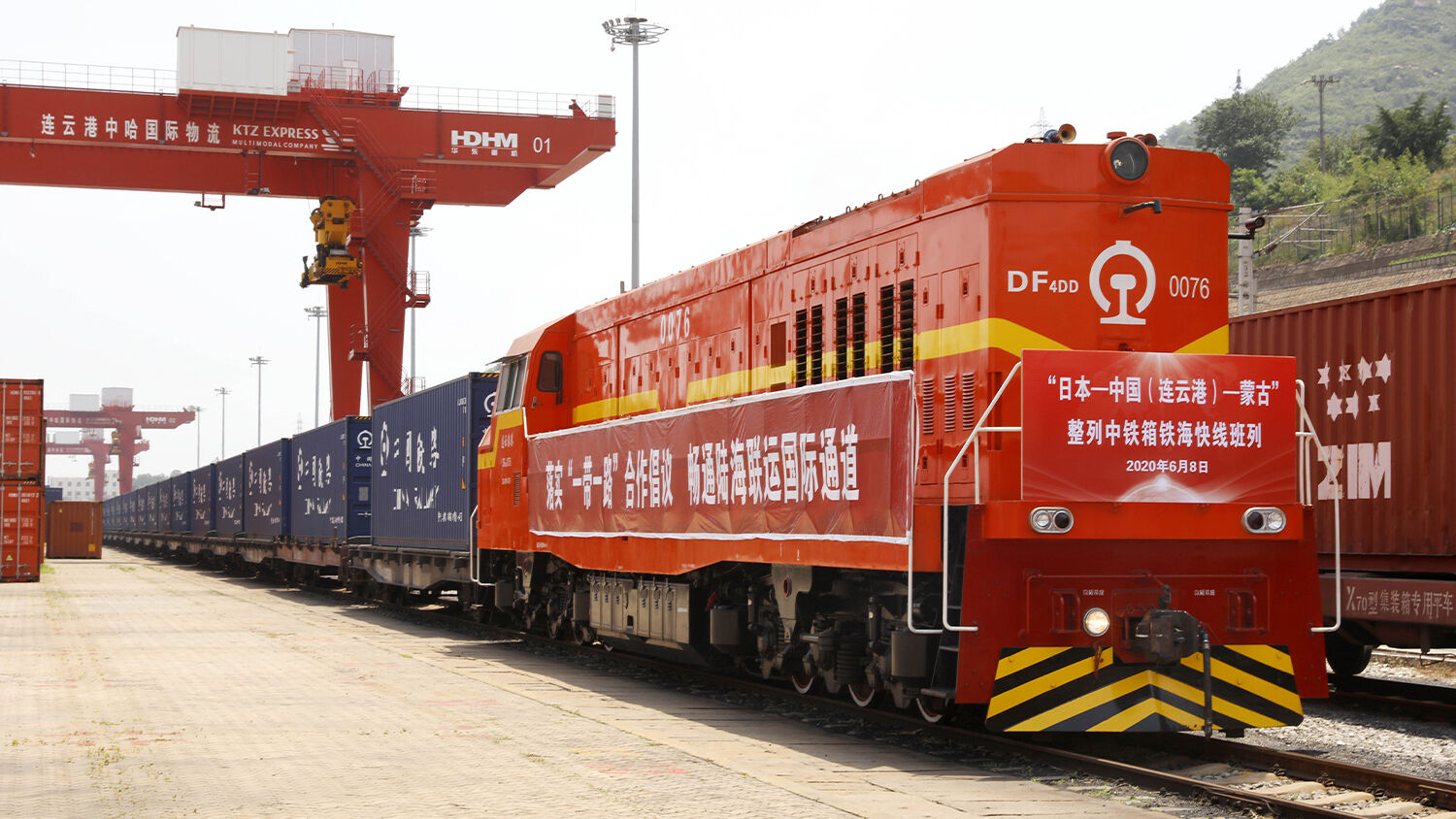 In the post-covid era, Beijing’s power over the region could greatly expand, helping propel it along the fast track toward superpower status.

In the remotest part of Kazakhstan, an area skirted by snow-capped mountains and situated as a backyard to the Taklimmakan Desert, the world’s largest “inland port” has sprung up almost overnight. China and Kazakhstan bill this bustling new hub in Khorgos as a “pearl in the desert” and the place where “east meets west.”

“Four or five years ago, there was nothing here,” Nurlan Toganbayev, head of Khorgos Gateway’s commercial department, told Foreign Policy in December, adding that, in the years ahead, the hub will “grow into something far larger.”

Khorgos’s purpose is mainly to process overland cargo en route from China to Europe. Its railways alone already handle more than 16 million tons of freight per year, and after a second rail link is brought online, this volume is expected to double. And Khorgos is only one star in the complex constellation of infrastructure projects that China is bringing online in Kazakhstan.

In 2013, when Chinese leader Xi Jinping announced his Belt and Road Initiative (bri) to better connect China to Asia, the Middle East, Africa and Europe, Kazakhstan eagerly signed up. It branded itself as the “buckle” of the Belt and Road. In the years since, Beijing has spent billions constructing or improving Kazakhstan’s Aqtau Port, Astana Light Rail, Alataw Pass, Western Europe-Western China Highway and more than 50 other infrastructure projects across the country.

The Astana Light Rail is a $1.8 billion BRI project designed to connect key areas within Nur-Sultan (formerly Astana), Kazakhstan’s capital city. Find this and hundreds of other projects across Eurasia in the @ReconAsia database: https://t.co/NMOcY9PUQC. pic.twitter.com/rnMGTK9w0r

The total contract value of the projects exceed $27.4 billion. These bri projects added to the rapidly increasing China-Kazakhstan trade give China heavy influence in numerous rungs of Kazakhstan’s economy and government.

And Kazakhstan is not the only Central Asian nation where Beijing’s footprint is deepening. The same trend is underway in Kyrgyzstan, Tajikistan, Uzbekistan and also Turkmenistan, which now sells nearly 80 percent of all its exports to China.

“No other external actor is capable of matching China’s economic capacity and investment potential in the region,” Aleksey Asiryan wrote for the Diplomat on July 29. As a result, China has “cemented its position as a consequential actor in Central Asia.”

China’s power in the region does not end with economic influence. The Chinese are also increasingly providing security to Central Asia, and even establishing a military presence in parts of the region.

This all points to a formidable grip Beijing is establishing on Central Asia.

It is true that many Central Asians harbor anti-China sentiments. This is due largely to the Chinese Communist Party’s systematic human rights abuses of peoples that Central Asians are ethnically, culturally and religiously linked to: Uyghurs, Kazakhs and Kyrgyzs minorities in Xinjiang, China. But Central Asian governments generally suppress anti-China demonstrations among their people in order to continue receiving Chinese investment. And a recent ponars survey shows that despite prevalent Sinophobia among the peoples of Central Asia, a majority are more likely to approve of Beijing than to disapprove.

There is also a matter that could be called “the bear in the room”: The fact that Russia views Central Asia as its backyard.

Early in his presidency, Russian President Vladimir Putin said the collapse of the Soviet Union was the 20th century’s “greatest geopolitical catastrophe.” The Soviet Union included Kazakhstan, Kyrgyzstan, Tajikistan, Turkmenistan and Uzbekistan. It put the peoples of these Central Asian nations—along with those of nine other republics located in Russia’s periphery—under Moscow’s control. Putin’s statement shows that he reflects warmly on the time when all those nations were forged into one behemoth beneath the Soviet hammer. He wishes the Soviet Union had not ever broken apart. And among his highest priorities as head of Russia has been to hammer as much of it as he can back into place.

This priority was clear with his 2008 invasion of Georgia and his 2014 campaigns against Ukraine. In both instances, Putin reversed part of that “greatest geopolitical catastrophe” by returning portions of these former Soviet states to Russian control.

Would his goals for the Central Asian nations be any different for those related to other former Soviet countries?

Some analysts have argued that Russia’s Soviet legacy in the region and its ongoing strategic interests in Central Asia could clash with China’s increasing interests. But in reality, Beijing and Moscow have come to an understanding about their interests in Central Asia, partly by approaching the region jointly—through the multinational security alliance called the Shanghai Cooperation Organization. This massive bloc is dominated by Russia and China, and also includes India, Kazakhstan, Kyrgyzstan, Pakistan, Tajikistan and Uzbekistan.

While China has the upper hand in its dealings with Russia, Beijing has been very sensitive to Moscow’s strategic and political interests in Central Asia. Russia, on the other hand, had to loosen its economic grip over the region. Whether by choice or out of necessity, the Russia-China tandem continues to peacefully coexist. Institutions like the Shanghai Cooperation Organization (sco) became an integral part of this framework. … While China’s military presence in the region is not an ideal scenario for Russia, it is unlikely to turn the two against each other. Russia-China military cooperation is only gaining momentum. It is in the interests of both countries to continue this trend.

So China is well positioned to keep on overcoming both anti-Chinese sentiments in Central Asia and potential frictions with Russia, the region’s former hegemon. “Overall,” Asiryan writes, “China finds itself in a very good position to consolidate its economic control over Central Asia.” So it will continue to cement its “position as a consequential actor in Central Asia.”

As with the rest of the world, the covid-19 outbreak severely disrupted much of Central Asia’s economic activity. But Asiryan said this creates conditions that will work to Beijing’s advantage. “In the post-pandemic era,” he wrote, “Chinese influence in Central Asia vis-à-vis other powers will only increase.” We should expect Beijing’s power over the region to continue to grow because there is no other player “capable of matching China’s capacity to invest in the region.”

China’s deepening influence in Central Asia and beyond is rebalancing the world economy. The bri and related initiatives are playing a role in ending the era of a unipolar world and helping propel China along the fast track toward superpower status. And these trends take on astonishing meaning when examined through the lens of Bible prophecy.

In the Trumpet’s February 2020 issue, editor in chief Gerald Flurry wrote, “These ‘times of the Gentiles’ are yet to be fully realized. However, we are in the outer edges of this catastrophic storm” (“The Climax of Man’s Rule Over Man”).

He explained that the term Gentile refers to “non-Israelite peoples” and that Israel “refers to a lot more than just the little nation in the Middle East.” In end-time prophecies, it primarily means modern-day America and Britain. (For a full explanation, order your free copy of The United States and Britain in Prophecy, by Herbert W. Armstrong.)

For decades, American and British leadership stabilized much of the world and advanced civilization. But during the times of the Gentiles, America and Britain will be broken powers and the world will be dominated by tyrannical rulers that lead two main groups of non-Israelite nations. “While there are many Gentile nations around today,” he wrote, “when this prophecy is completely fulfilled there will be two major powers—one revolving around Russia and China, and the other around Germany.”

China’s deepening influence across Central Asia represents a considerable boost in Beijing’s global power. It is also being accomplished in a way that continues to reinforce the China-Russia bond. As such, this trend is a significant development helping set the stage for these “times of the Gentiles” to be fulfilled.

To understand what this means for you and your family, and to learn about the profoundly good news tied to these developments, carefully read Mr. Flurry’s article “The Climax of Man’s Rule Over Man.”