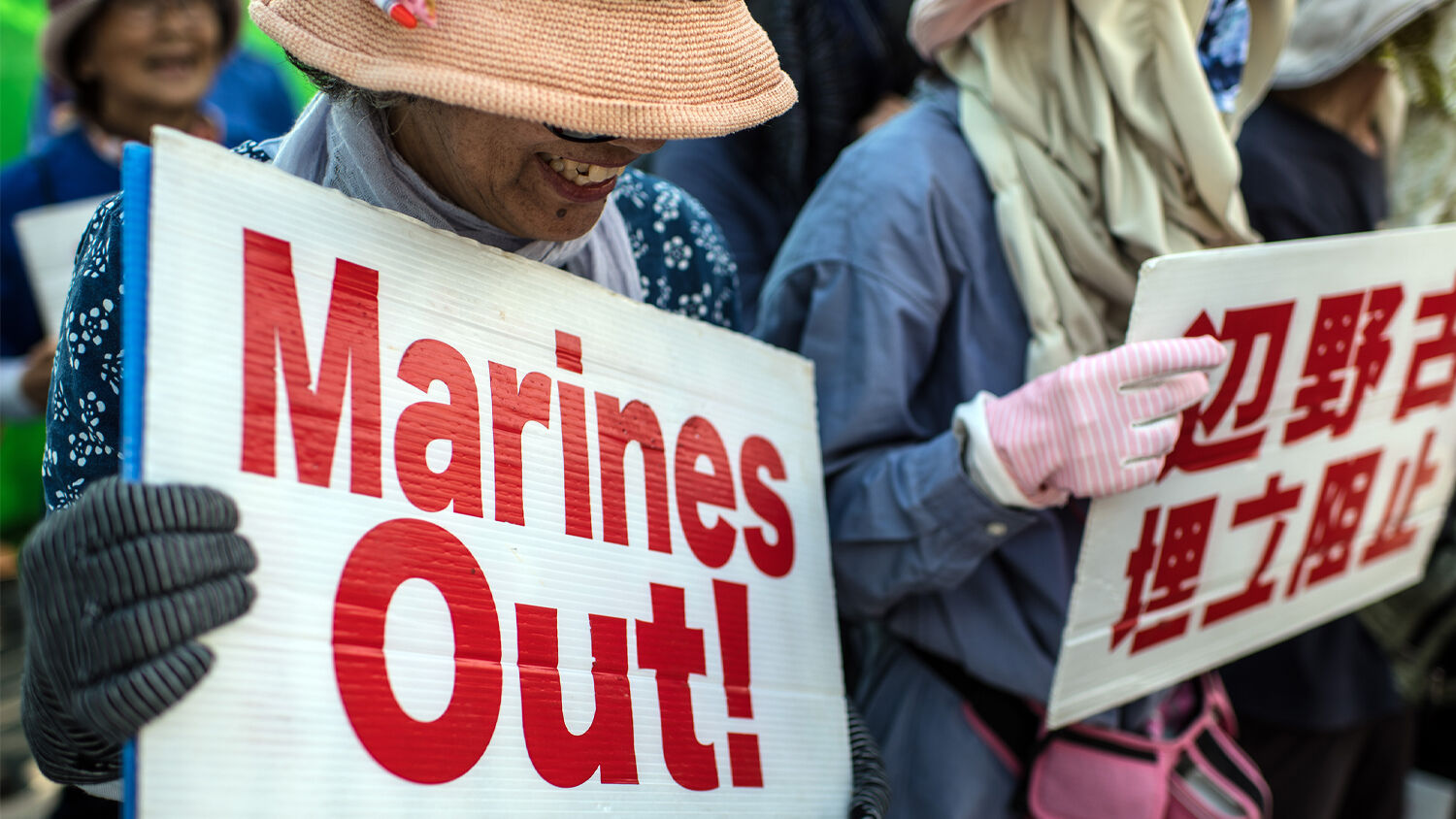 Protesters stage a sit-in to block construction vehicles working on the expansion of Camp Schwab, a U.S. military base, on May 31, 2018, in Okinawa, Japan.
Carl Court/Getty Images

Though Moscow’s current overtures are unlikely to build a Russia-Japan partnership, evidence shows that such a union is on the horizon.

As Japan’s uneasy relationship with the United States comes under intensifying pressure, Russia is extending an olive branch to Tokyo that could inspire a historic reorientation for the Asian nation.

On the island of Okinawa, where 26,000 American troops are stationed, a significant coronavirus outbreak among U.S. soldiers and affiliated personnel has the Japanese shaken. “It is extremely regrettable,” Okinawa Governor Denny Tamaki said on July 12, “that the infections are rapidly spreading among U.S. personnel when we Okinawans are doing our utmost to contain the infections.”

Japan has been largely successful at containing covid-19, and had only seen 148 confirmed cases on Okinawa before the outbreak among U.S. servicemen. And though the U.S. has vowed that infected personnel are under strict quarantine, Japanese authorities are not placated. “Okinawans are shocked by what we were told,” Tamaki said. “We now have strong doubts that the U.S. military has taken adequate disease prevention measures.”

America’s military presence in Japan dates to the end of World War ii, when the U.S. occupied the defeated nation and wrote a clause into its new Constitution banning war as a means for Japan to settle international disputes. Washington and Tokyo also signed the Treaty of Mutual Cooperation and Security, codifying Japan’s dependence on America for its defense, and stipulating that the U.S. would protect Japan by stationing American troops in the country. Around half of the 50,000 American military personnel currently stationed in Japan are in Okinawa. They have been a perennial source of tensions between the two nations, with the Japanese decrying crime, noise, pollution and aircraft accidents caused by the troops. The covid-19 outbreak is only the latest issue to outrage the local populations.

The coronavirus outbreak in Okinawa comes just weeks after Japan announced it had canceled plans to buy U.S.-made Aegis Ashore missile defense systems. Instead the Japanese government will likely develop and field long-range cruise missiles for use in preemptive strikes. For decades, Japan has been edging away from pacifism and reliance on U.S. protection, mostly in a discrete manner. But if the Japanese government continues to decline U.S. involvement and begins pursuing the weaponry and legal authority to launch preemptive strikes, it will be bringing into the open its intent to resolve disputes with other nations through war.

Meanwhile, on July 10 Russia presented Japan with the framework of a peace treaty to finally conclude their lingering World War ii disputes. In the closing weeks of the war, Soviet forces occupied and annexed four islands in a chain now claimed by both nations, known in Russia as the Southern Kurils and in Japan as the Northern Territories. By 1949, the Russians had forcibly deported some 17,000 Japanese residents from these islands. They have remained under Russian control ever since, but Tokyo insists that the resource-rich islands are rightfully and inherently Japanese. For 70 years, the dispute has prevented Russia and Japan from signing a peace treaty to formally conclude the war.

The framework the Russians presented this week did not mention the Kuril island issue, and a referendum earlier this month bans Russian leaders from ceding any of the country’s territory. So in the near term, the measure likely will not persuade the Japanese to sign a peace treaty and build closer ties with Russia. But the announcement highlights Russia’s desire, as it increasingly leans east, to foster warmer ties with Japan. And Bible prophecy shows that even if Russia’s most recent efforts toward this thaw are unsuccessful, the U.S.-Japan alliance will soon come to an end and Tokyo will ally with Russia.

Pundits sometimes discuss the word Armageddon found in Revelation 16:16, but they rarely mention “the kings of the east” written about in verse 12. The Scriptures show that this will be group of Asian countries that combine their militaries in the end time in order to challenge a power bloc led by Germany. Revelation 9:16 reveals that the Asian army will be made up of 200 million soldiers—a force far larger than any ever assembled in human history.

Some details of how this Oriental juggernaut will be established remain unknown, but Ezekiel 38:1-2 make clear that it will be led by Russia, with China in a position of secondary leadership. Verse 6 of Ezekiel 38 says “Gomer” and “Togarmah”—ancient names for the main peoples that today make up Japan—will be part of this Russia-led Asian superpower.

Today, animosity persists between the peoples of Japan and Russia, and even more so between the peoples of Japan and China. But consider what the Japanese would do if they witnessed a mighty united European military defeat their primary ally, the United States. Would Japan wait to see if it could confront this ferocious European entity on its own? Or would a logical desire to survive prompt it to lay aside its differences with Russia and China and join the “kings of the east”?

The survival instinct would compel the Japanese to humble themselves before the Russian and Chinese and merge their increasing military power into the Asian axis. Bible prophecy shows that this is the general course of events that will play out in the years ahead. In Japan’s current strains with the U.S. and in Russia’s current overtures to the Japanese, a preview of a historic reorientation for Japan is discernible. To understand the details of these prophecies and also the urgency and hope that lies at their heart, request your free copy of our booklet Russia and China in Prophecy.