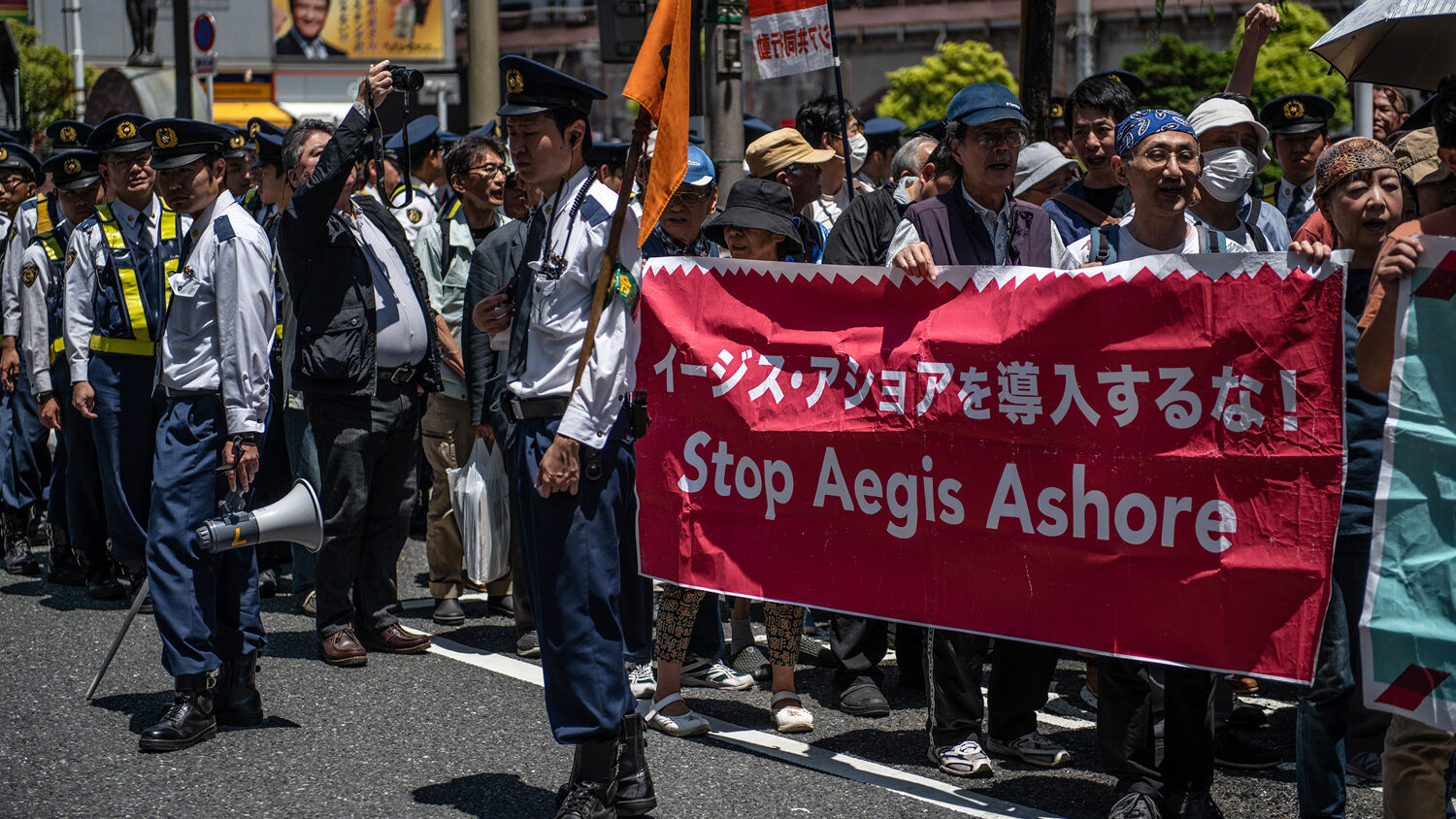 People hold a banner protesting against the U.S-developed Aegis Ashore missile interceptor systems that will be based in Japan during a demonstration against the forthcoming state visit by U.S President Donald Trump to Japan on May 25, 2019 in Tokyo, Japan.
Carl Court/Getty Images

What takes its place may represent a large step in Tokyo’s return to open militarism.

In 2017, Japan approved plans to acquire two batteries of the land-based missile defense system, mainly for protection against North Korean missiles, some of which, in recent years, have broached Japanese airspace and territorial waters. Concerns over an increasingly aggressive China at Japan’s doorstep added to the decision to acquire the advanced U.S. system. By deploying one Aegis Ashore battery to Akita prefecture in Japan’s north and another to Yamaguchi prefecture in the south, the entire country would have theoretically been protected from incoming missiles.

But Tokyo says concerns over safety, cost and technical deficiencies, as well as questions about the system’s ability to intercept certain advanced missiles prompted it to scrap the deal.

“After deliberations at the [National Security Council], we have come to the decision to cancel the deployments in Yamaguchi and Akita prefectures,” Kono said at a meeting of Liberal Democratic Party lawmakers.

Kono noted that although Tokyo would not “move forward with this project,” the threats posed to the nation are “still there.” And high on Japan’s list of possibilities to replace Aegis Ashore with is a plan with chilling implications: developing and fielding long-range cruise missiles capable of making preemptive strikes.

This made-in-Japan option would be not only far cheaper than the multibillion-dollar Aegis Ashore batteries, but also far more effective. It would enable Japan to hit missiles on launchpads in North Korea or elsewhere, before they were even fired—a feat immensely easier than hitting one midflight. “It’s an obvious move,” Geopolitical Futures noted, describing the complex task performed by interceptor systems as, “striking a bullet with a bullet in space.”

Since Japan is constitutionally forbidden from possessing overtly offensive weaponry, authorities are striving to portray this cruise missile plan as entirely defensive. “We want to thoroughly consider the matter as a strictly defensive policy,” Chief Cabinet Secretary Yoshihide Suga said on June 24.

But when the conversation concerns long-range cruise missiles that are designed to strike targets in other nations, such statements ring hauntingly hallow.

And in light of Japan’s history, such statements and such weapons acquisition plans should arrest our attention: Before and during World War ii, Imperial Japan carried out some of the worst brutality in mankind’s bloodstained history. The Japanese soldiers’ mercilessness and persistence were largely fueled by their belief that they were a superior, semi-divine race fated to rule the Earth. This toxic thinking rendered many Japanese, troops and civilians alike, incapable of surrendering—even in the face of unbeatable odds.

By the conflict’s final days, Japan had been warring for a decade and a half. Nearly 3 million Japanese were dead, with millions more wounded or sick. Most of the population was starving, and the country lay in ruins. But even then, troops and civilians typically would not surrender. Nothing short of two atomic weapons was forceful enough to halt the nation’s perverse military zeal.

And World War ii was not an anomalously fanatic chapter for Japan. Consider also the invasions of Korea in the late 16th century, the Battle of Ganghwa, the First Sino-Japanese War, the invasion of Taiwan, the Russo-Japanese War, and the list goes on.

When in “war mode,” the Japanese tend toward unusual fervor and fanaticism. In recognition of this fact, after World War ii the U.S. occupied Japan and put a clause in its new Constitution that outlawed war as a means for Japan to resolve disputes with other nations. Soon after, Washington and Tokyo signed the Treaty of Mutual Cooperation and Security. This codified Japan’s dependence on America for its defense, stipulating that the U.S. would defend Japan by stationing American soldiers near potential conflict zones in the region.

For decades, Japan has been edging away from that pacifism and toward military normalization—but mostly in a surreptitious and discrete manner. If Tokyo moves to acquire the weaponry and legal authorization to make preemptive missile strikes, it would represent a major and overt step in that direction—one that would surely cause Asia’s arms race to shift into a higher gear.

Since the Aegis Ashore was U.S.-made, Japan’s decision to drop it in favor of a domestically built option could also represent a significant step away from reliance on U.S. security.

Also notable is that when it comes to preemptively striking enemy missile sites, conventional weapons pack a somewhat limited punch. Defense Connect’s Stephen Kuper argues that this limitation means that if Japan moves ahead with the plan to develop and deploy missiles for preemptive strikes, it would not be long before it determines that those missiles should be tipped with nuclear warheads. In light of Japan’s wartime history, this possibility is profoundly unsettling.

Japan’s drift away from pacifism and toward militarism—potentially even with nuclear arms—is also significant because it is creating the conditions for specific Bible prophecies to be fulfilled. Scripture shows that in the quickly approaching final world war, one of the major players will be a large Asian power bloc. Ezekiel 38:1-2 shows that this bloc will be led by Russia. Verse 6 includes ancient names for the peoples who make up modern-day Japan, showing that Tokyo will be absorbed into this Russian-led juggernaut. Japan’s militarization today is setting the stage for that prophesied Asian bloc to coalesce into a formidable military power.