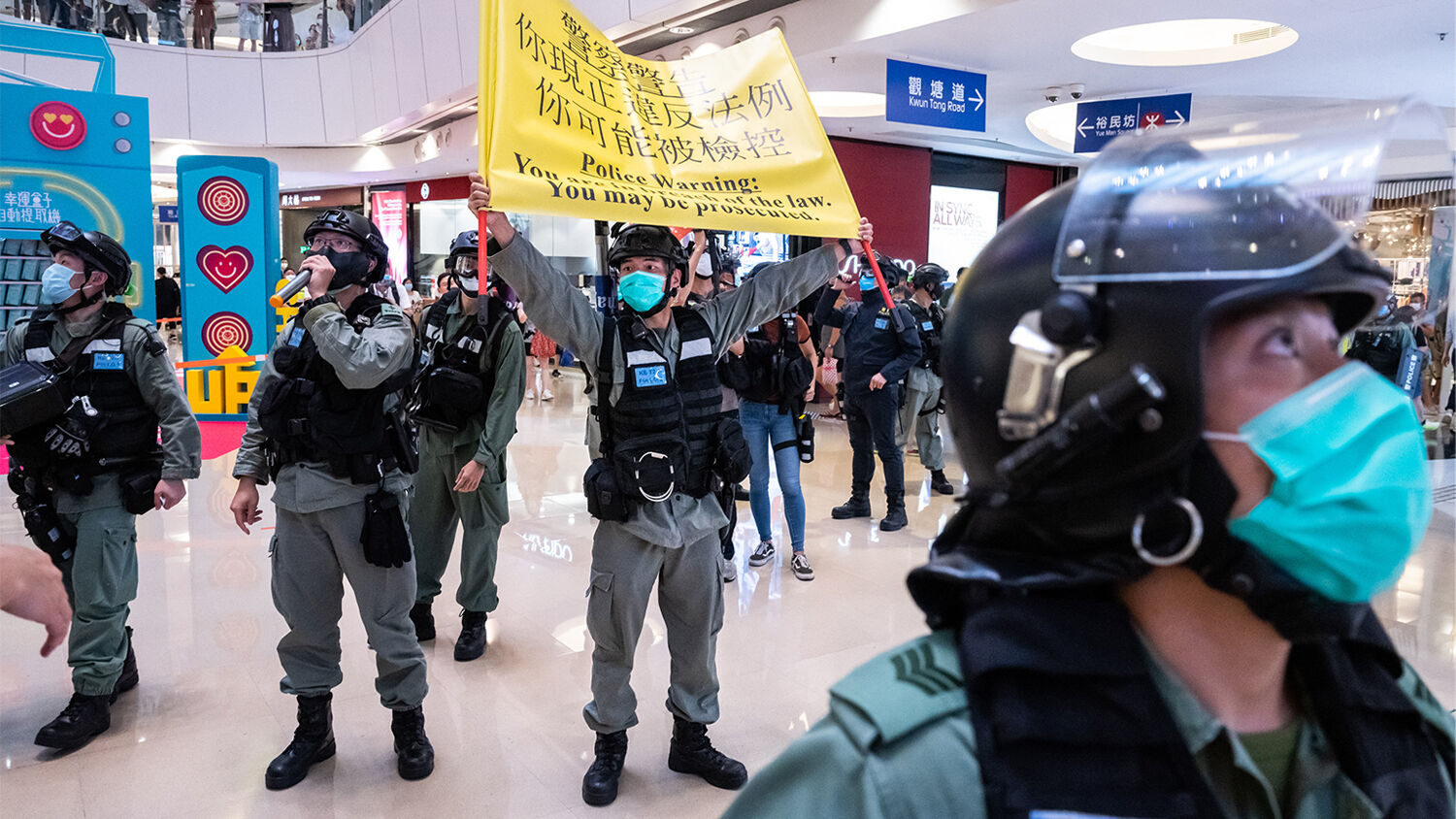 Riot police hold up a warning flag during a demonstration in a mall on July 6, 2020 in Hong Kong, China.
Billy H.C. Kwok/Getty Images

With the stroke of a pen, the bastion of prosperity and freedom has been turned into just another oppressed and fearful Chinese city.

The seas of protesters that teemed through its streets throughout the last year have all but vanished. The Union Jacks, Star-Spangled Banners, colonial-era Hong Kong flags and political placards that demonstrators once brandished en masse are now a rare sight. Businesses that long displayed posters expressing solidarity with protesters have torn them down. Pro-democracy leaders have tendered their resignations or disbanded their groups, with many now planning to flee abroad. And tens of thousands of activists—including an analyst the Trumpet had frequently consulted for an insider’s perspective—have suddenly deleted online accounts they long used to cry out for freedom. They’ve tried to scrub all online traces of pro-democracy content and have gone radio silent.

The sea change occurred after China imposed sweeping new security laws on Hong Kong, effective as of 11 p.m. on June 30. The 66 articles criminalize four categories of behavior: subversion, secession, terrorism and collusion with foreign entities to endanger Chinese security. It is well understood that these terms can be defined with terrifying looseness to include behavior or rhetoric seen as even remotely critical of the Chinese Communist Party (ccp).

The legislation also establishes a Chinese security agency to enforce these laws. It places these enforcers above the law, authorizes them to enforce ccp power in Hong Kong however they see fit—just as the ccp’s paramilitary forces do in the mainland.

The law gives police wide powers to conduct searches, eavesdropping and surveillance without court oversight and to order people to turn over their electronic communications, and it appears to suggest that Internet service providers must cooperate with probes. The law compels suspects to “answer questions” and turn over information, although Hong Kong law gives people a right to stay silent.

The profundity of the changes became stark on July 1, a date set aside to observe Hong Kong’s handover to China from British rule. This occasion normally draws massive crowds of pro-democracy activists into the streets, but this year only a handful of fearless individuals ventured out. Police pounced on them rapidly, arresting more than 300 and charging 10, including a 15-year-old girl, with “inciting subversion.”

For the crime of possessing political pamphlets, authorities collected dna samples from these 10 individuals and conducted full searches of their homes. Their ultimate punishment could be life in prison. Or if any is deemed guilty of “conspiring” with a foreign country, the new legislation says he or she “shall be liable to a more severe penalty” than life imprisonment.

The implementation of the law also came with a chilling announcement: If a suspect is sent to the mainland to face trial, Hong Kong will have no input on whether or not the death penalty will be imposed.

Perhaps most worrying is the law’s claims of extraterritoriality. Besides applying to anyone in Hong Kong, regardless of their nationality or residency status, the text says it also covers offenses committed against Hong Kong “from outside the region by a person who is not a permanent resident of the region.”

The legislation has prompted public libraries to purge their shelves of books that could be viewed as pro-democracy. And Hong Kongers fear that even words spoken inside their homes could potentially place them at odds with the law. Resident Katie Lam told the New York Times that her young sons love to sing “Glory to Hong Kong,” an unofficial anthem of the pro-democracy protests. But now she fears that neighbors could overhear the song and report them to authorities. “Even though we all knew it would happen one day,” Lam said of Hong Kong being forced into the Chinese mold, “it’s still painful.”

When Britain handed Hong Kong over to China in 1997, many of the territory’s residents feared that the freedoms the British had established there would be torn away by the Chinese Communist Party. To mitigate the fear, Britain negotiated an agreement: China promised to allow Hong Kong to maintain its distinct identity under a rubric called “one country, two systems.” This formula guaranteed that for at least 50 years, Hong Kong would be part of the “one country” of China. But Beijing would allow the government and people of Hong Kong their own “system.” That meant a high degree of economic, political and judicial autonomy.

For the first few years, the “two systems” model was carefully respected. But in the early 2000s, China began quietly inserting itself into some of Hong Kong’s affairs, and the people of the island demonstrated resolutely against it. As the years went by, Beijing continued making unsettling pushes against Hong Kong’s semi-autonomy, and each one inspired bouts of protests in the territory.

But this time is different. We are not even halfway through the promised 50 years, but it is clear that China has ended Hong Kong’s freedoms. And now, the stakes are so high, there is almost no one left willing to protest.

For many decades, Britain and then America were the main global powers. Their hegemony stabilized much of the world and improved life for numerous peoples and nations, including Hong Kong where Great Britain converted an essentially unpopulated island into a paragon of freedom and prosperity. Today, that prosperity and, more importantly, those principles and freedoms, have vanished.

This makes Hong Kong a location where we can watch in real time as a Bible prophecy concerning the end of the Anglo-American era is fulfilled. Jesus Christ Himself warned about what is coming next: “the times of the Gentiles” (Luke 21:24).

No one argues that British rule in Hong Kong and elsewhere was without fault. The British (and the Americans) are no better than other peoples. Yet no one can convincingly claim that the prosperity—and much more importantly, the law-based principles and freedoms—that Britain and the U.S. disseminated throughout the world were vastly superior to the results of domineering regimes such as the ccp.

Seeing the ccp annihilate those freedoms and transform Hong Kong into just another browbeaten and subjugated Chinese city is tragic. And it will not end there. Bible prophecy shows that this is only a small preview of the worldwide destruction that will erupt during the times of the Gentiles.

Why are Gentile nations attaining more and more power? Why do they champion ideologies fundamentally different from those of the U.S. and Britain? Why has the power of Britain and America weakened so dramatically? Why were their principles better? Where did those principles come from? And is there hope for Hong Kong? To understand the answers to these crucial questions, read Trumpet editor in chief Gerald Flurry’s article “The Climax of Man’s Rule Over Man.”