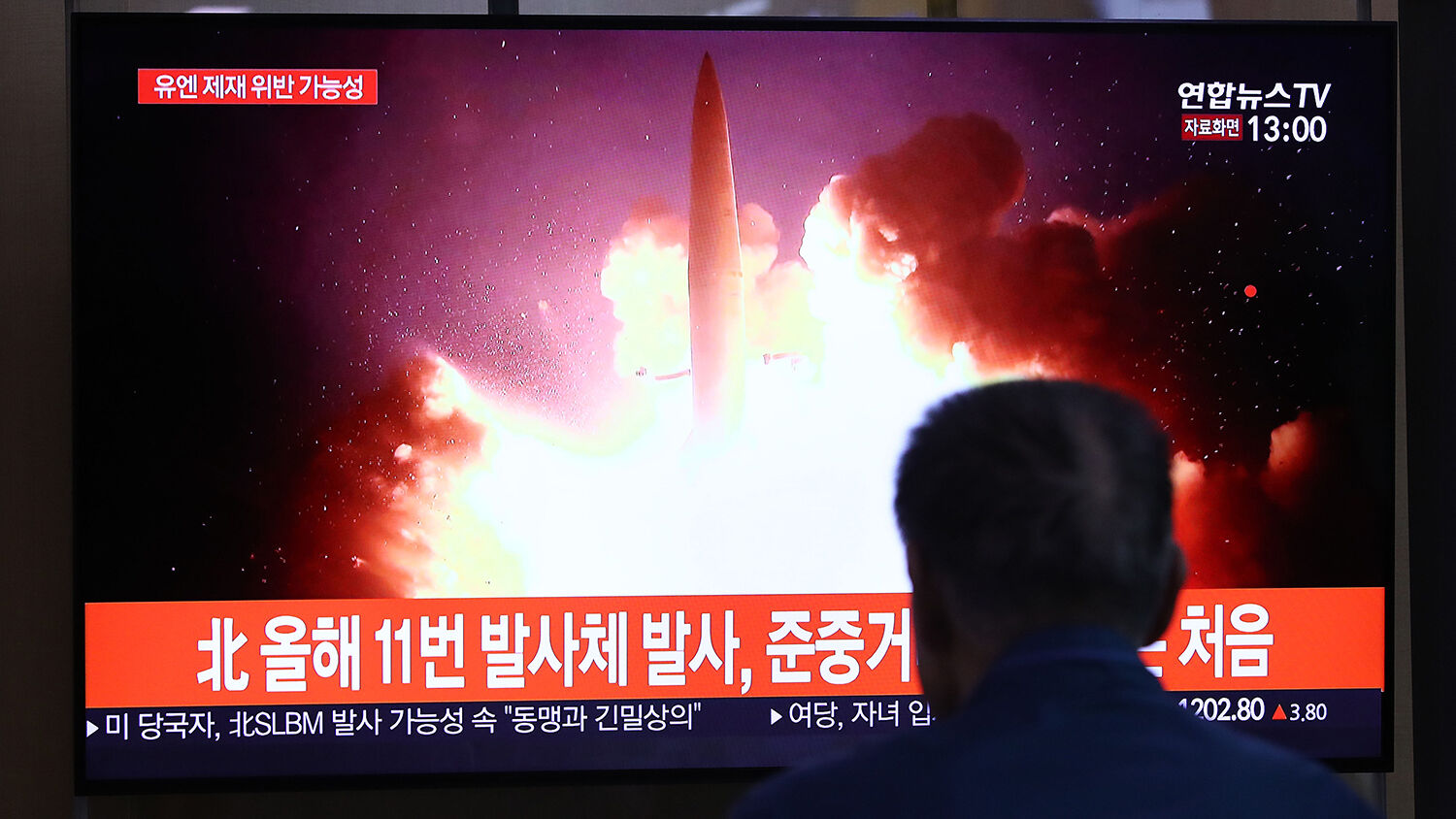 ‘The message since 2018 is that Japan was kind of the punching bag.’

North Korea test-fired a submarine-launched ballistic missile (slbm) into Japanese waters on October 2, just one day after announcing it would resume working-level talks with the United States about denuclearization.

The missile, a solid-fueled Pukguksong-3, was launched from a platform at sea some 10.5 miles northeast of North Korea’s coastal city of Wonsan. It was the longest-range, solid-fuel missile ever tested by North Korea, and it marks the first “strategic” launch since November 2017.

First two pages of Thursday’s Rodong Sinmun report on the test-launch of a “new-type SLBM Pukguksong-3” on Wednesday. pic.twitter.com/mleIeipxSL

Japanese officials said the nuclear-capable missile split in two, with one of the two stages landing north of Japan’s Oki Islands and within the Japanese Exclusive Economic Zone. It traveled just under 280 miles, but along a lofted path with an apogee of 565 miles. Japan’s Kyodo News said if fired at a standard trajectory, the missile could strike targets up to 1,240 miles away. That would place all of South Korea and Japan within the weapon’s range.

“The successful new-type slbm test-firing comes to be of great significance,” North Korea’s state-run kcna wrote, “as it ushered in a new phase in containing the outside forces’ threat to the dprk [North Korea] and further bolstering its military muscle for self-defense.”

Due to the advancements demonstrated by this test, nuclear and missile expert Joshua Pollack said the launch “pushes the envelope.” Yet the U.S. did little more than wag its finger at North Korea for the launch. “We call on the dprk to refrain from provocations,” a U.S. State Department spokeswoman said, adding that the North Koreans should “abide by their obligations under [United Nations] Security Council Resolutions.”

This muted response is in line with the Trump administration’s downplaying of a spate of short-range missiles tested by North Korea since May. U.S. President Donald Trump dismissed those tests as “very standard” and has stressed that, unlike the intercontinental ballistic missiles North Korea tested early in his presidency, the short-range models cannot reach the U.S. mainland or many overseas American assets.

President Trump’s tolerance of the recent tests is driven largely by a desire to preserve his efforts to persuade North Korean leader Kim Jung-un to denuclearize his military. This has consistently been among Mr. Trump’s highest foreign-policy goals, and with working-level talks starting again tomorrow, he is hopeful that progress will be made. Achieving denuclearization of North Korea would represent a victory for President Trump that would be particularly welcome during the intensifying political turmoil at home, and would boost the likelihood of his winning a second presidential term.

One flaw with this approach is that Japan and South Korea are treaty allies of the United States. Both rely on America for national security and defending their interests. And both are within range of the weapons the North is testing. It was no exaggeration when Japanese Defense Minister Tarō Kōno called the October 2 test an “extremely problematic and dangerous act” and “a serious threat to Japanese national security.”

The dynamic puts Japan and Prime Minister Shinzō Abe in a tight spot.

“Japan has to consider the complex dynamics that are going on between the U.S. and North Korea right now,” Kristi Govella, an assistant professor of Asian studies at the University of Hawaii–Manoa, told the New York Times. “President Trump has clearly stated that he does not find these short-range missiles to be troubling, so if Prime Minister Abe chooses to press that very assertively, then he could also end up being blamed for scuttling talks between the U.S. and North Korea or otherwise interfering with U.S. strategy or policy in the region.”

Ankit Panda said “the message since 2018” when the Washington–Pyongyang negotiation efforts began “is that Japan was kind of the punching bag.”

This dynamic could drive a broad wedge between the U.S. and its Asian allies. And this could be exactly what North Korea and its main allies—China and Russia—are working to accomplish.

It is no secret that China and Russia support the North Korean regime: They regularly use their UN veto power to shelter it, and even when sanctions are passed against it, they violate them to aid the North. This gives China and Russia considerable influence over North Korean policy, including weapons tests.

It is also no secret that China and Russia share the goal of removing U.S. power from East Asia, including the presence of some 28,000 U.S. military personnel in South Korea and some 54,000 in Japan.

Japan and South Korea have been discussing the possibility of expelling U.S. troops. Both have boosted their own military power, partly to make them less reliant on outside help. President Trump has also voiced his displeasure with how much America pays to safeguard Japan and South Korea. So strain was already present in these U.S.-Asian alliances, and each North Korean missile test strikes not only its target but also those strains.

In 2017, when North Korea’s antagonism was at a peak, Trumpet editor in chief Gerald Flurry said the world should be more concerned about Russia and China than about North Korea.

This analysis, he explained, was founded on Bible prophecy. “The Bible’s prophecies show that, in a sense, the North Korea crisis is a massive distraction from the real threat posed by China and Russia,” he wrote. “These powerful Asian nations are the only reason North Korea is able to operate so freely. And Bible prophecy shows that they pose a threat many times greater than the one from North Korea!” (co-worker letter, Sept. 13, 2017).

The prophecies of which he spoke are recorded primarily in Ezekiel, Daniel and Revelation. They show that Russia will soon lead a vast and powerful military confederacy, with China in a secondary leadership role. The Scriptures shows that Asian countries such as the Koreas and Japan will throw their power behind this Russian-led bloc.

When these prophecies are placed alongside prophecies about the soon-coming collapse of American power, it becomes plain that the days are numbered for America’s alliances with Japan and South Korea.

In his booklet The Prophesied ‘Prince of Russia,’ Mr. Flurry shows that this Russia-led Asian confederacy will play a major role in World War iii—the most violent conflict in mankind’s history. But he also stresses that these developments are connected to unprecedentedly good news. At the end of this nuclear war, he writes, Jesus Christ will usher in “a peaceful and prosperous new age for the entire Earth!”

To understand these prophecies and the hope that permeates them, order your free copy of The Prophesied ‘Prince of Russia.’