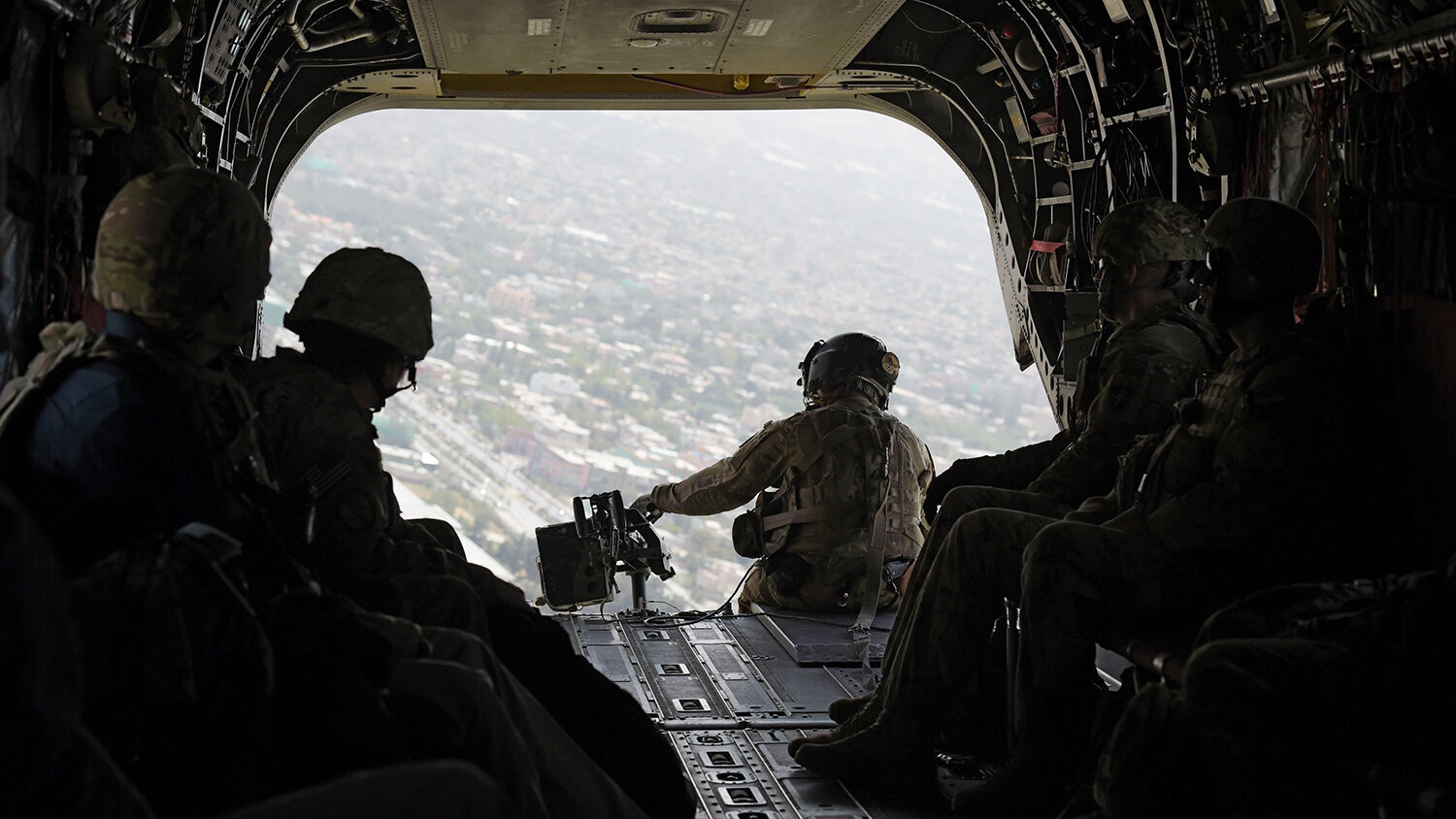 A U.S. soldier sits in the rear of a Chinook helicopter while flying over Kabul, Afghanistan.
SHAH MARAI/AFP via Getty Images

The economic impact of the disease is pushing the U.S. out of the Middle East—and clearing the way for Iran.

The United States State Department announced that it would be cutting $1 billion in aid from Afghanistan this year, and potentially another billion in 2021 after rival Afghan leaders refused to support a unified government. U.S. President Donald Trump has stated his desire to remove all U.S. forces from Afghanistan within the next 14 months. This severing of economic ties will only serve to quicken America’s retreat.

The main reason Secretary of State Mike Pompeo has given for the cut is that Afghan officials have been “irresponsible” and shameful in not resolving the differences between the two factions for the sake of the people. “Because this leadership failure poses a direct threat to U.S. national interests,” Pompeo said, “effective immediately, the U.S. government will initiate a review of the scope of our cooperation with Afghanistan.”

However, the real reason is the coronavirus. According to Foreign Policy, the economic problems brought about by coronavirus will reinforce the U.S.’s need to make more cutbacks, especially in Afghanistan. The $1 billion reduction shows America is recalculating its spending priorities.

The historic coronavirus stimulus package, the largest economic rescue in American history, was signed into law on March 27. The $2.2 trillion package is intended to help stimulate the economy and encourage consumer spending in a country with $14 trillion in household debt, a $1.4 trillion federal budget deficit and $23 trillion in national debt.

Altogether, this means that coronavirus is further suffocating an already wheezing economy. Therefore, Afghanistan, which the U.S. was already planning to abandon, is suddenly at the bottom of the list of priorities.

From a purely fiscal standpoint, this makes sense.

Since the U.S. deployed troops to Afghanistan in response to the 9/11 attacks carried out by al Qaeda in 2001, it has spent $10 billion in counternarcotics, $87 billion in training Afghan military forces, $24 billion in economic development, and another $30 billion in reconstruction. In total, the war has cost America $2 trillion. In addition, because the debt-laden U.S. economy funded this war through borrowed money, it will have to pay over $600 billion in interest. And a potential $1.4 trillion could be spent in medical care for wounded veterans of the war over the next few decades.

Despite the heavy investment of time, money and American lives, the Taliban still controls 70 percent of Afghanistan. Afghan Army deaths haven’t been reported in years because they were too high. And now, even the unity in the armed forces could be compromised, with two men currently declaring themselves the lawful president of Afghanistan.

The people are suffering too. More than 50 percent of Afghans live below the poverty line; the nation is almost completely dependent on foreign aid.

Since the economic implications from coronavirus seem to be here to stay, the U.S. is cutting its losses. And while the withdrawal of U.S. troops from Afghanistan is President Trump’s ultimate goal, it is the Taliban’s main goal too.

The last time Afghanistan’s main benefactor withdrew its troops and foreign aid, the government collapsed and the Taliban captured the capital. That happened in 1989, when the dying Soviet Union withdrew its troops and cut off the ex-Communist President Mohammed Najibulla’s government. Months later, the Taliban’s militias ravaged the capital, and Najibullah was executed.

America’s “doomed Afghan war” is about to yield similar results. The Taliban will once again completely control the war-torn nation. But the Taliban is not the main enemy; it is far less of a threat than the head of terrorism in the Middle East: Iran, the biblically prophesied “king of the south.”

In his booklet The King of the South (request your free copy here), Trumpet editor in chief Gerald Flurry writes (emphasis added):

After the Sept. 11, 2001, terrorist attacks on America, the U.S. targeted Afghanistan, then Iraq. Both of these campaigns absorbed an enormous amount of America’s resources in its “war on terror.” But where did all of this world terrorism begin? Iraq and Afghanistan may be dangerous parts of the equation, but they are not the head of the terrorist snake.

We must go back in history to see terrorism’s roots. It’s not enough to destroy the branches. We must pull the terrorist tree up by the roots. It’s the only way to win this war.

The Bible prophesies that America will not win this war. In fact, it will never win another war again. The urgent retreat from this failed campaign in the Middle East bears testament to this fact. God has broken the pride of America’s power (Leviticus 26:19).

Mr. Flurry explains the reason why: “Our ultimate success will be determined by our relationship with God. If God is for us, we can’t lose. But if God is against us, we can’t win. And Bible prophecy relates that God is against us and is cursing us.” God is allowing these curses in order to drive our nations back to Him.

For more information on these prophecies and what their fulfillment means, request your free copy of The United States and Britain in Prophecy, by Herbert W. Armstrong.