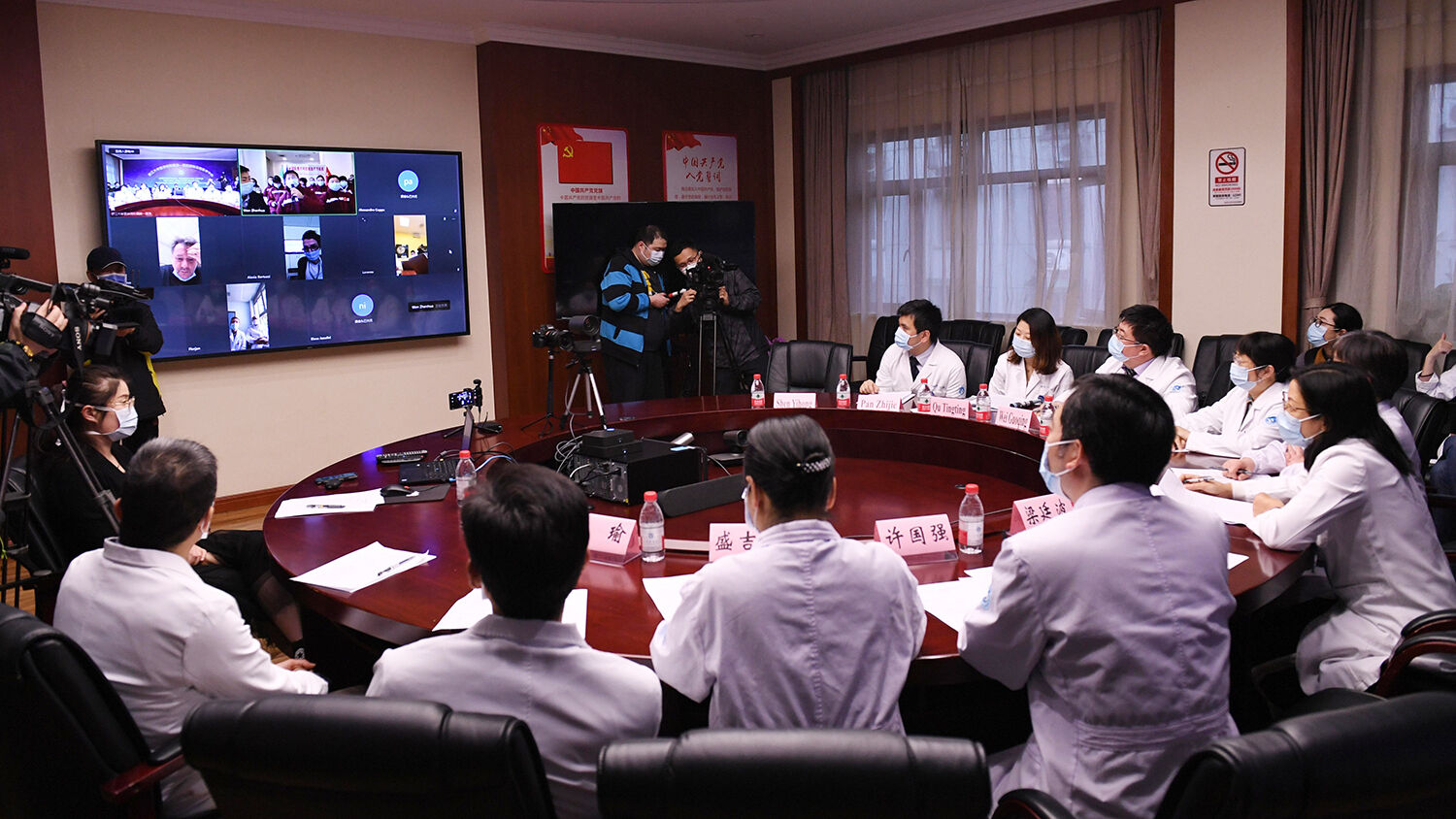 Doctors at the First Hospital of Zhejiang province in Hangzhou, China, attend a video conference call on March 27 with Italian medical experts and Chinese experts in Italy to share experiences on fighting covid-19.
Li Chenyun/China News Service via Getty Images

Italians are coming to view China less as the originator of covid-19 and more as a valuable partner during their hour of need.

As Italy’s health system experiences increasing strain from the covid-19 outbreak, tons of medical supplies are being airlifted in by China. The Chinese outreach is deepening ties between the two powerful nations and setting the stage for one of the Trumpet’s long-held forecasts to come to pass.

The first shipment, donated by the Chinese government and private donors, arrived in Rome on March 12. It included 31 tons of supplies, such as respirators, monitors, defibrillators, masks, test kits, icu equipment, medications, and blood plasma from recovered Chinese patients.

The package arrived after Italy’s partners in the European Union had refused its requests through the EU Civil Protection Mechanism for help with the outbreak. Germany and France initially went so far as to ban the export of masks and other medical goods to Italy or elsewhere in order to ensure that their own populations would be well stocked.

“In this moment of great stress, of great difficulty, we are relieved to have this arrival of supplies,” said the head of the Italian Red Cross, Francesco Rocca. The shipment is “a really important donation for our country,” he said.

Along with the equipment, Beijing also sent nine Chinese medical experts who had been involved in China’s efforts to contain the disease in Wuhan, the city of its origin. The Chinese experts “gained a great deal of experience that Italy urgently needs,” said Marcello de Angelis, the spokesman for the Italian Red Cross. “China has had considerable success in fighting the epidemic, and we want to work with Chinese experts on an international level,” de Angelis said.

A second shipment of Chinese equipment and health experts arrived in Milan, Italy, a week later. And several Chinese companies have since made additional shipments to various other Italian cities.

Regarding these numerous shipments, Italian Foreign Minister Luigi Di Maio said he was grateful that “there are still people who would like to help Italy.” In a telephone call with Italian Prime Minister Giuseppe Conte, Chinese leader Xi Jinping said China seeks to continue working with Italy to counter the covid-19 outbreak and to build a “Health Silk Road” to parallel Xi’s signature “Belt and Road Initiative” (bri).

The bri aims to rebuild the ancient “Silk Road”—a network of routes that enabled the flow of goods and ideas across Asia, the Middle East, Africa and Europe. Xi has long worked to persuade countries in those regions to cooperate with China to build rail lines, roads, bridges and ports that reconstruct and greatly expand upon those ancient routes. It is all for the purpose of reshaping the international system to place China at its center, and last March, Italy signed a milestone agreement with Xi on participation in the project.

“Xi Jinping’s dream,” Business Insider wrote after the signing, “just claimed one of its biggest victories yet.”

The victory was massive for Xi, not just because it meant Chinese vessels could have easy access to some of the Mediterranean’s choicest ports, but also because Italy is a member of the G-7. This group of democratically governed, advanced economies also includes Canada, France, Germany, Japan, the U.S. and the United Kingdom. The G-7 are powerful nations that help shape global policy, so having one on board the bri was a colossal win for Xi and China.

That move in March 2019 signaled a new era for Sino-Italian relations. And now, one year later, China is repaying the favor by helping Italy through its most desperate time in recent memory. This aid, according to founder and Director of the Center for Russia Europe Asia Studies Theresa Fallon, will bring the two nations closer still. “China in Italy is now seen as a country that provided concrete help when needed,” she wrote for the Diplomat, and that “should help strengthen Sino-Italian relations.”

This deepening bond takes on considerable significance when viewed through the lens of Bible prophecy.

Isaiah 23 discusses a massive trade bloc that will be formed in the modern day called a “mart of nations.” One of the powers leading the bloc will be a country Isaiah refers to in verses 1 and 12 as Chittim. This is an ancient name for modern-day China. Also in a lead role will be Tyre, a city representing the commercial heart of modern Europe. And verse 13 also lists “the land of the Chaldeans,” a designation for modern Italy, as being a key player in the European end of the “mart.”

Isaiah 23 and Ezekiel 27 show that these powers, along with Germany, Japan, Russia and others, will come to control global commerce for a brief time. And the scriptures make plain that this trade partnership will operate to the extreme detriment of America and some of its allies.

Trumpet editor in chief Gerald Flurry explains the prophetic significance of this economic “mart” in his free booklet Isaiah’s End-Time Vision. “The Bible contains many prophecies of that European power attacking America—and many other prophecies of America being besieged,” he writes.

He explains that the besiegement will be accomplished by the mart of nations powers: Italy, Germany and other European powers will carry it out with the help of such Asian nations as China, Russia and Japan. “When the [European power] attacks North America, there will be no help or sympathy from Asia,” he writes. “All of them are going to besiege America, Britain and the Jewish nation.”

More details about the besiegement of the U.S., Britain and the Jewish nation by the mart of nations are revealed in Deuteronomy 28:52: “And he shall besiege thee in all thy gates, until thy high and fenced walls come down, wherein thou trustedst, throughout all thy land: and he shall besiege thee in all thy gates throughout all thy land, which the Lord thy God hath given thee.” When God was actively blessing the U.S. and the UK, He gave them control over numerous sea “gates,” including Panama, Singapore, Malta, Cyprus and Hong Kong (Genesis 22:17; 24:60). Now these strategic locations are under the control of the “mart of nations” powers—or are quickly headed that way.

In the near term, China’s deepening ties with Italy, including Xi’s new efforts to add a “Health Silk Road” to the Belt and Road, point to an abysmally bleak future for America and its allies. But Bible prophecy does not end there! It goes on to say that after this economic siege occurs and after the fall of the U.S. and Britain, an entirely new age will begin: the most hope-filled epoch in all of human history.

Christ will come back to Earth, bringing a swift end to mankind’s self-destruction and ushering in an age of prosperity, health and abundance for the peoples of China, Italy, the U.S. and all the world. “Thank God,” Mr. Flurry writes, “there is great news beyond the bad news.”

To learn more about these Bible prophecies, the effect they will have on your life, and the hope that is at the heart of them, order your free copy of Isaiah’s End-Time Vision.