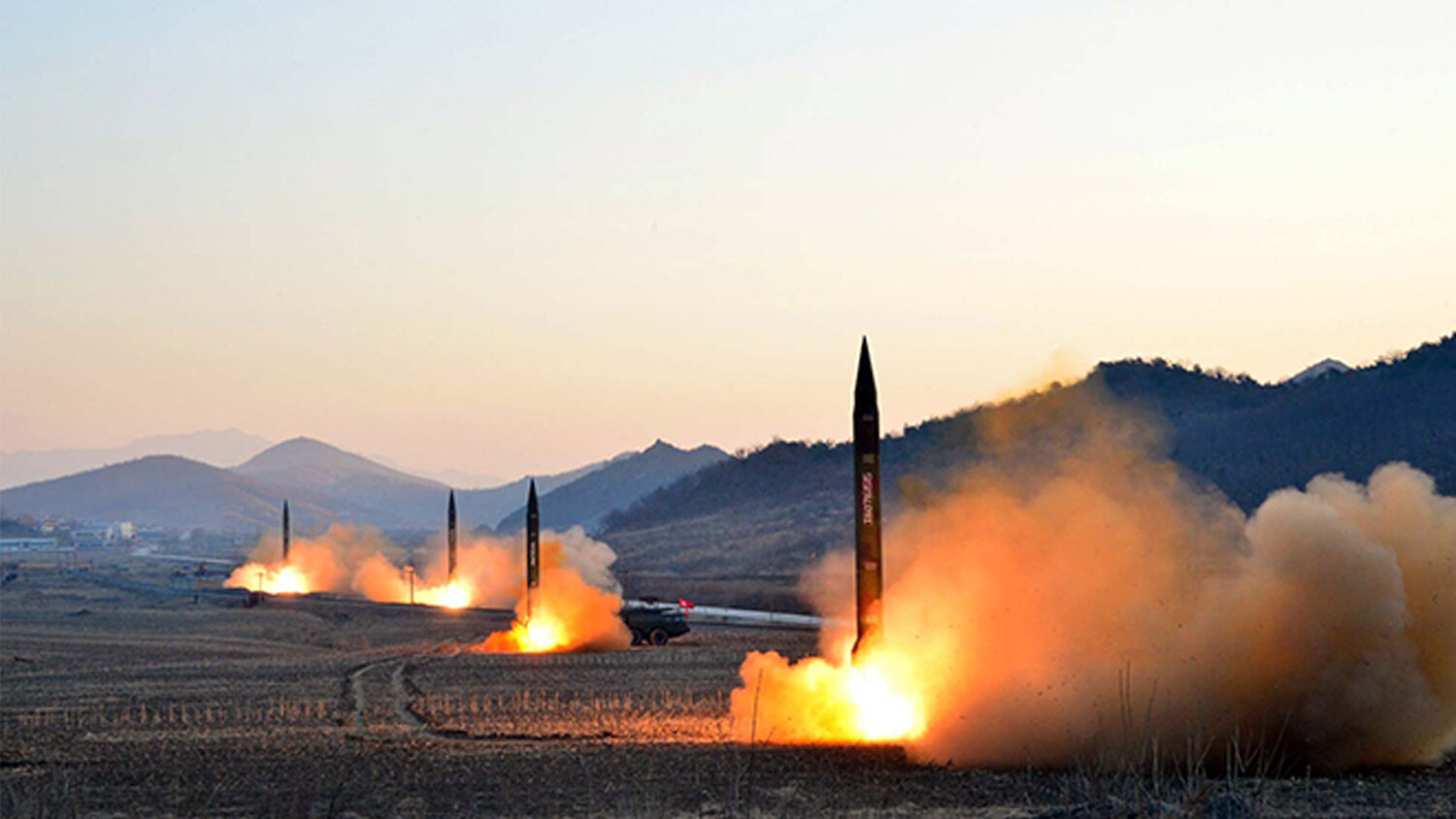 This undated picture released by North Korea’s Korean Central News Agency via KNS on March 7, 2017 shows the launch of four ballistic missiles by the Korean People’s Army during a military drill at an undisclosed location in North Korea.
STR/AFP/Getty Images

China and Russia are pulling levers from behind the scenes to accomplish a cherished goal.

North Korea has test-fired at least 18 short-range missiles since May. And though this may appear to be business as usual from the North, a closer look shows some machinations at play that could be working toward a major shift in Asia’s security dynamic.

One key aspect of this flurry of tests is, though the missiles involved have limited range, they are remarkably maneuverable. “These are mobile-launched, they move fast, they fly very low, and they are maneuverable,” North Korean weapons expert Vipin Narang told the New York Times. “That’s a nightmare for missile defense. And it’s only a matter of time before those technologies are migrated to longer-range missiles.”

An even more important aspect of the tests is the way the Trump administration has responded to them: It has essentially shrugged them off, with United States President Donald Trump calling the missiles “smaller ones” and the tests “very standard.” President Trump has emphasized that, unlike the intercontinental ballistic missiles (icbms) and other longer-range weapons the North was testing early in his presidency, the models now being launched couldn’t hit the U.S. mainland or many American assets. Therefore, he says, they don’t worry the U.S.

President Trump’s downplaying of the recent tests is motivated partly by a desire to avoid throwing cold water on efforts he and North Korean leader Kim Jung-un have made toward reaching a deal to denuclearize the North. Since the start of his presidency, this has been among Mr. Trump’s highest foreign-policy goals. Its accomplishment would represent a historic U.S. victory, and would multiply Trump’s chances of being voted into a second presidential term.

But the trouble with this U.S. approach is that Japan and South Korea are treaty allies of America. Both depend largely on the U.S. for national security and for defending their interests. And both are within range of the North’s short-range, highly maneuverable missiles.

“This was the worst-case scenario for Tokyo,” Yuki Tatsumi, co-director of the Stimson Center’s East Asia Program, told the Japan Times on August 28. “Trump deals with North Korea, only focusing on its nuclear program and icbms, leaving Japan still exposed to North Korea’s short- and medium-range missiles.”

Japan’s anxiety was on full display on August 25, the day after the latest North Korean missiles were launched into the Sea of Japan—when Japanese Prime Minister Shinzō Abe met with President Trump. After the president once again shrugged off the test launches, Abe, who is normally a staunch Trump supporter, contradicted him. Abe called the tests “extremely regrettable” and stressed that they clearly violate United Nations resolutions and must not be brushed aside.

Many leaders in South Korea are also alarmed by the Trump administration’s insouciance over the tests. If the differing viewpoints are not resolved, it could drive a wedge between the U.S. and its Asian allies. And that may be precisely what North Korea and its primary allies—China and Russia—are aiming to accomplish.

It is no secret that China and Russia support the North Korean regime: They routinely use their UN veto power to protect it, and they violate UN sanctions—including those they signed onto—to assist the North. China and Russia also are known to orchestrate some of North Korea’s foreign policy from behind the scenes—and to use that power to accomplish their goals.

It is also no secret that a key goal of both China and Russia is to see the U.S. ousted from their neighborhood. They despise the presence of some 28,000 U.S. troops in South Korea and some 54,000 in Japan, and long to see the alliances severed so those American soldiers would vacate the region. They use their power over North Korea to push toward that outcome.

With these considerations factored in, it is not difficult to see that North Korea’s short-range missile tests could well be a calculated effort by China and Russia to work toward weakening America’s alliances with Japan and South Korea.

These two Asian giants may well be pulling the levers from behind the scenes, encouraging the North to fire these weapons, knowing full well that President Trump will avoid reacting to them—partly because their range is beneath the threshold of what could threaten the U.S., and partly due to his fear of spoiling the chances of denuclearizing the North. Russia and China would also well know how profoundly this rankles Japan and South Korea. This would all work toward China and Russia’s goal of weakening America’s Asian alliances, and thereby give them a freer hand in the region.

In recent years, chatter has abounded in both South Korea and Japan about removing U.S. troops from their countries, and both have boosted their own military power, partly so they will be equipped to stand on their own if their ties to the U.S. are severed. In recent years, President Trump has also voiced his displeasure with how much America pays to safeguard Japan and South Korea. Strains were already emerging in these U.S.-Asian alliances, and each of North Korea’s short-range missile tests strikes and exacerbates those strains.

In 2017, when North Korea’s aggression was at a major peak, Trumpet editor in chief Gerald Flurry said the world should be more concerned about Russia and China than about North Korea—because it is those two countries that allow the North to behave as it does.

The prophecies Mr. Flurry referred to are recorded in Ezekiel 38 and 39, Daniel 11 and the book of Revelation. These Bible passages show that, during what Mr. Flurry called “the time ahead,” Russia will lead a mighty military confederacy, with China in a secondary leadership role. Less powerful Asian countries, such as North Korea, South Korea and Japan, will throw their power behind this Russian-led bloc.

When we place these Bible passages alongside prophecies about the soon-coming end of American power, it becomes clear that the days are numbered for the U.S.-Japan and U.S.-South Korea alliances.

So as we watch these ongoing short-range missile tests, it is important to keep a close eye, not just on North Korea, but also on China and Russia, and on the U.S. and its alliances in the region. Prophecy is clear that a shift will soon remove U.S. power from Asia’s security dynamic.

In his booklet The Prophesied ‘Prince of Russia,’ Mr. Flurry shows that with Russian President Vladimir Putin in charge and leading China, North Korea and others, this Asian confederacy will play a key role in the most violent conflict in mankind’s history. But he also shows that these developments are tied to unprecedentedly good news. At the end of this fast approaching conflict, he writes, Jesus Christ will usher in “a peaceful and prosperous new age for the entire Earth.”