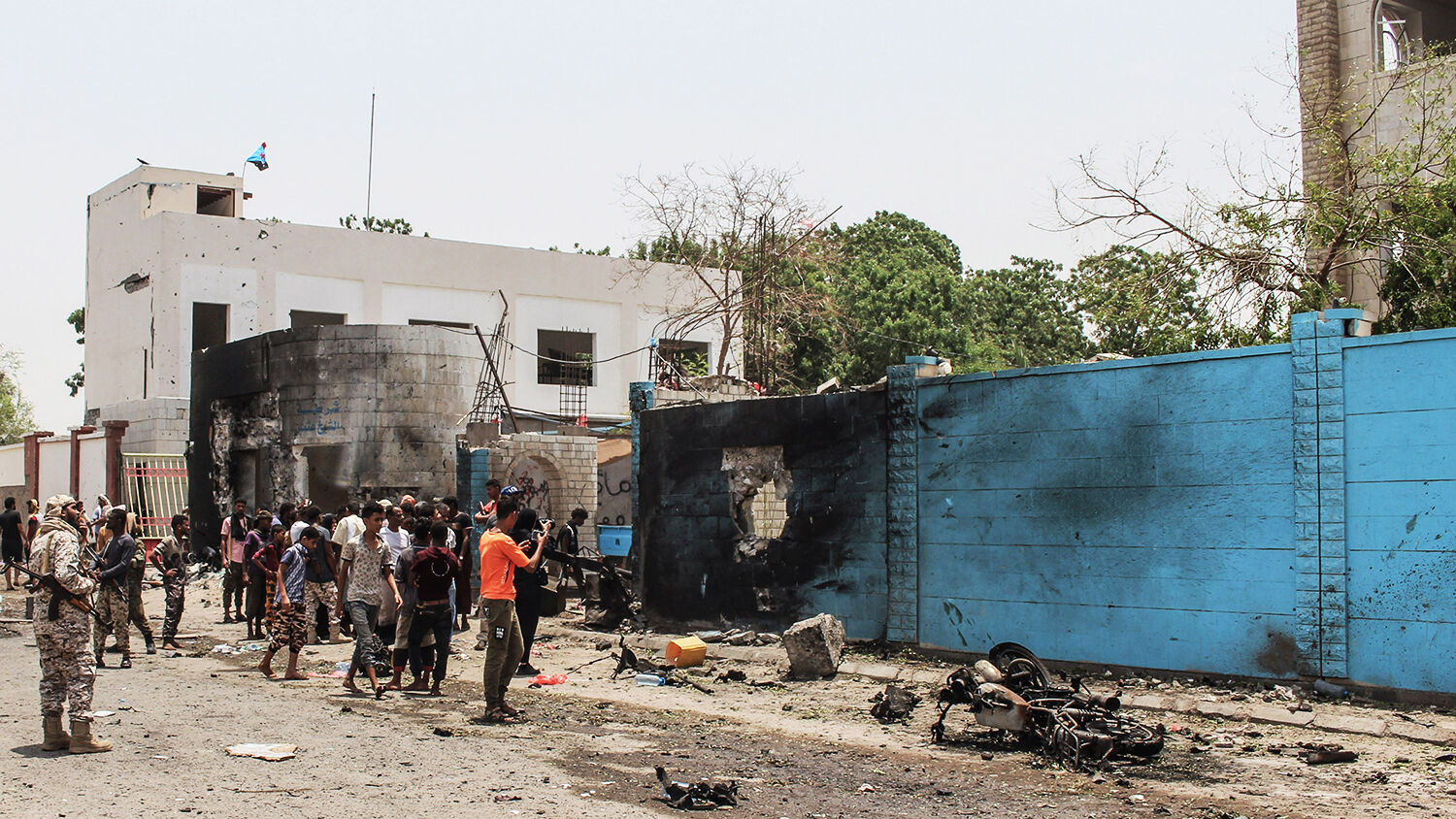 People inspect the damage from an attack on the Sheikh Othman Police Station on August 1 in Aden, Yemen.
Wail Shaif/Picture Alliance/Getty Images

On August 1, the Houthis’ official Al Masirah television station reported that Yemen’s Iran-backed Houthi rebels had attacked a military site in Dammam, Saudi Arabia. The attack was carried out with a long-range missile, which traveled approximately 800 miles from its origin. There was no immediate comment by Saudi authorities.

The second attack was on a military parade in the southern Yemeni city of Aden, with a medium-range ballistic missile, a Qasef-2K drone and a coordinated suicide bombing at a nearby police station. At least 51 people were killed in the attack and dozens more were wounded. A senior military commander, reportedly giving a speech at the time of the attack, was among those killed.

Al Masirah tv confirmed the attack, claiming that the parade was staged in preparation for a military attack against Houthi rebels.

On Twitter, Yemen’s prime minister said the attack showed “the hostile and destructive Iranian role in Yemen through its support for the criminal Houthi militias, which it provides with ballistic missiles, drones and weapons in order to spread chaos ….” Saudi Arabia’s envoy to Yemen also accused Iran of facilitating the attack.

While Houthi attacks inside Yemen and against Saudi Arabia and its coalition forces are not uncommon, they are becoming more effective as Iran provides the rebel group with more advanced weaponry. And as the attacks succeed, the group is becoming more emboldened.

Col. Turki al-Maliki, spokesman of the Arab Coalition forces, claimed that Yemen’s Houthi rebels had fired 200 ballistic missiles at Saudi Arabia and 59 at coalition forces and bases in Yemen. In most cases, the Saudi kingdom or its neighbor, the United Arab Emirates, has claimed to intercept or destroy the missiles. However, it is unlikely that Saudi Arabia or the U.A.E. have a highly successful missile interception rate; rather they are likely hiding additional successful Houthi attacks. While Iranian-made Houthi missiles pose a significant threat to Saudi and Yemeni defenses, they also threaten the stability of the Middle East as a whole, particularly Israel.

Iran has the largest missile arsenal of any Middle Eastern nation, and it is seeking to use it against Israel. For the past few decades, it has been working in Syria to set up missile depots as a staging ground from which to attack Israel. However, thousands of Israeli air strikes against Iranian targets and missile shipments have made this an uphill struggle.

Instead of testing its missiles on Israel’s defense systems, Iran conducts its own local tests and supplies its terrorist proxies with missiles for field tests. The recent uptick in successful Houthi missile strikes reveals just how far Iran has pushed its missile program in recent years.

The size and effectiveness of its missile arsenal makes Iran the most dangerous nation in the Middle East. And Iran’s primary goal is to destroy the Jewish state and conquer Jerusalem in the name of Islam.

Trumpet editor in chief Gerald Flurry writes in The King of the South: “Iran conquering Jerusalem would SUDDENLY galvanize the whole Islamic world! It would spread radical Muslim influence to many countries outside the Middle East.”

The Trumpet closely watches Iran’s ballistic missile program development because it is leading toward the fulfillment of a biblical forecast written 2,500 years ago by the Prophet Daniel: “And at the time of the end shall the king of the south push at him: and the king of the north shall come against him like a whirlwind, with chariots, and with horsemen, and with many ships; and he shall enter into the countries, and shall overflow and pass over” (Daniel 11:40). Mr. Flurry long ago identified “the king of the south” as radical Islam, led by Iran. (Request a free copy of The King of the South for proof.)

In this prophecy, Iran will push at “the king of the north,” a German-led European power. In The King of the South, Mr. Flurry explains that Iranian missiles “could give Iran virtual control of the trade through [the Red and Mediterranean seas]. Radical Islam could stop the flow of essential oil to the U.S. and Europe!”

During tests, Fatah-110 and other Iranian missiles have already proved highly successful at striking vessels. Houthi rebels have already shown a willingness to use sea mines and drones to harass oil trade. At what point will they unleash their missile arsenal?

As Iran continues to improve its ballistic missiles (illegally) and export them to its terrorist networks, watch for groups such as the Houthis to become continually more emboldened.

For more information, request your free copy of The King of the South.