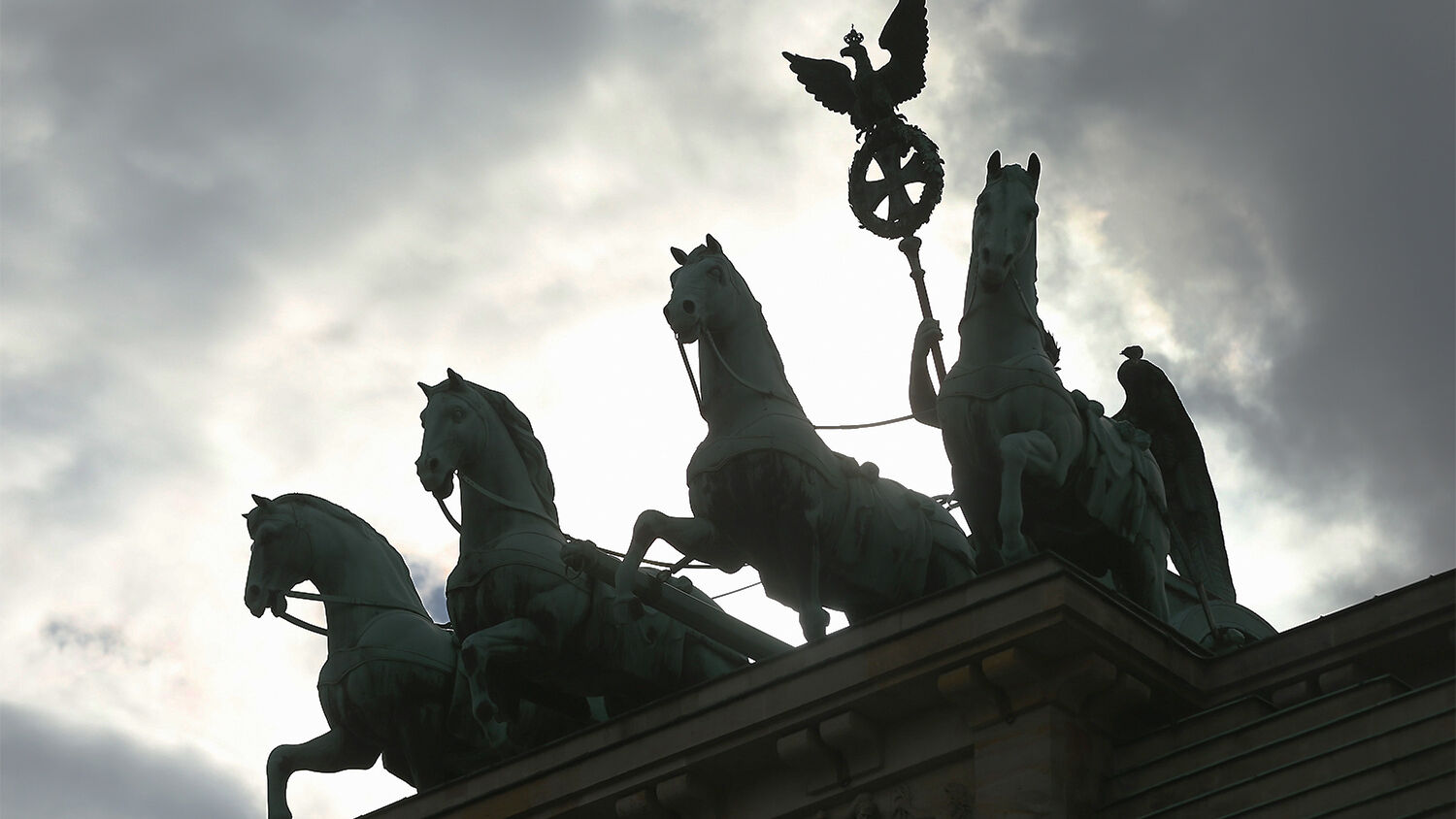 The Quadriga statue on top of the Brandenburg Gate in Berlin, Germany
Sean Gallup/Getty Images

Chancellor Merkel will be followed by darkness, but not because of President Trump.

German Chancellor Angela Merkel is viewed as the last pillar in a shaky world order. As the end of her chancellorship approaches, Merkel is sounding the alarm of uncertain times ahead. In a cnn interview on May 28, Merkel warned against rising dark forces in Europe. Her future global assessment is similarly bleak. Spiegel Online asked: “Will Merkel Be Followed by Darkness?” The Bible answers this question in vivid detail.

cnn chief international anchor Christiane Amanpour noted that while many analysts and historians describe Merkel as the face of good Germany, they also say that dark old demons have risen under her reign. These “very dark forces” are again winning in elections. Concerning these assessments, Merkel said:

Despite Merkel’s efforts, she has been unable to protect Jews from attack and unable to prevent the far-right from winning votes. Yet she is still seen as a warrior against these evils.

Merkel is also globally seen as the last defender of the free world. “During her term in office, Turkey transformed from a hopeful democracy into an autocratic regime. The Saudi crown prince turned out to be a cruel despot rather than the young reformer many initially hoped he might be. Putin sought to make his delusions of grandeur reality. And then there’s Trump, whose most recent project is to attempt regime change in Iran, an experiment that already failed terribly one time before,” Spiegel Online wrote.

Spiegel Online also noted that Merkel has “a deep pessimism,” a “fear that the world is sliding into the abyss.” Concerning a speech she gave at the Fulbright Prize for International Understanding in January, Spiegel Online wrote:

The German chancellor against the forces of darkness—that is the message of the evening. And because there is such widespread agreement in the auditorium about the gravity of the global situation, and about the good fortune that at least the chancellor is trying to stop the apocalypse, Merkel decides to deviate from her otherwise unrelenting schedule and promises to stay for another quarter of an hour at the subsequent reception.

Merkel’s speeches reveal a sense of urgency that few people have today. But she is accused of doing little to prevent the events against which she warns. Many demand that she take a stronger stance against President Trump or against the world’s authoritarian leaders in Turkey, China and Russia.

At the same time, many underestimate the greater evil that is boiling beneath the surface in Germany itself.

During Merkel’s tenure, we have seen the dramatic rise of the far right in Germany. We have seen the rise of xenophobia and countless refugee centers set ablaze. We have also seen a shocking comeback of anti-Semitism and a rising hatred and disdain for America and Israel. Investigations have uncovered deep-rooted Nazism in Germany’s military corps. Surveys reveal that 40 percent of German youth know very little or nothing about the Holocaust. The desire for strongman leadership is on the rise.

Under Chancellor Merkel’s leadership, “dark forces” have made a comeback in Germany, throughout Europe and, in many ways, globally.

Merkel has often compared our time to the time leading up to the Thirty Years’ War, one of the darkest chapters in European history. The world—as in the past—is totally oblivious to the nightmares ahead. Merkel seeks to draw attention to the coming dangers and warns against taking peace for granted. Her warning is largely unheeded. But Merkel’s gloomy predictions fall far short of Europe’s prophesied dark future.

The dark forces rising in Germany have, at large, been restrained from entering the government. But as the Trumpet and its predecessor, the Plain Truth, have warned for decades, this is about to change.

Merkel’s time in office has preceded the rise of another German dictator. The Bible indicates that a new leader will soon arrive, who will promise “peace” but bring about the greatest evil this world has ever seen. Notice Daniel 8:23: “And in the latter time of their kingdom, when the transgressors are come to the full, a king of fierce countenance, and understanding dark sentences, shall stand up.”

This man will not only understand “dark sentences,” he will also use Germany’s and Europe’s rising “dark forces” to bring unprecedented evil on the world. In Chapter 5 of How to Be an Overcomer, Trumpet editor in chief Gerald Flurry explains:

This is Satan’s man! He’s going to understand dark sentences. He will be into this magic interpretation and the worshiping of the will. Don’t worry about strong reasoning or intelligence; that’s not important. Just follow along. This goes beyond logic—this is magical! It is really about worshiping the devil! That is what it was all about with Hitler, and it is going to happen again!

The Bible clearly states that this evil man will rise “when the transgressors are come to the full.” We are living in a world of unprecedented evil and sin. Sin is the transgression of God’s perfect law (1 John 3:4). Due to man’s lawlessness, God allows the rise of this evil leader. The Bible also gives an indication of how and when this man will come to power. In his article “The Holy Roman Empire Goes Public—Big Time!” Mr. Flurry explained:

Daniel 11 describes the European strongman as being eloquent and coming to power by flatteries. Merkel’s coalition in Germany is very weak; it is on the verge of failing. I believe when Merkel leaves office, you will see the strongman of the Holy Roman Empire get control.

Merkel’s government in Germany is currently under extreme pressure and about to collapse. She has already announced that she will not run for office after her term ends in 2021. Many commentators believe that her term could end much sooner. After she leaves office, we will see the rise of this prophesied strongman.

As sure as the Bible prophesies of this coming darkness, it also foretells that this darkness will be followed by light. The reign of this prophesied strongman will be cut short by the return of Jesus Christ (Daniel 8:25). Christ will end the world’s darkness! “For as the lightning cometh out of the east, and shineth even unto the west; so shall also the coming of the Son of man be” (Matthew 24:27). Light will follow the world’s darkest chapter in history.

Request your free copy of Daniel—Unsealed at Last! by Gerald Flurry to understand why darkness will befall the Earth and how God will bring light to the world.