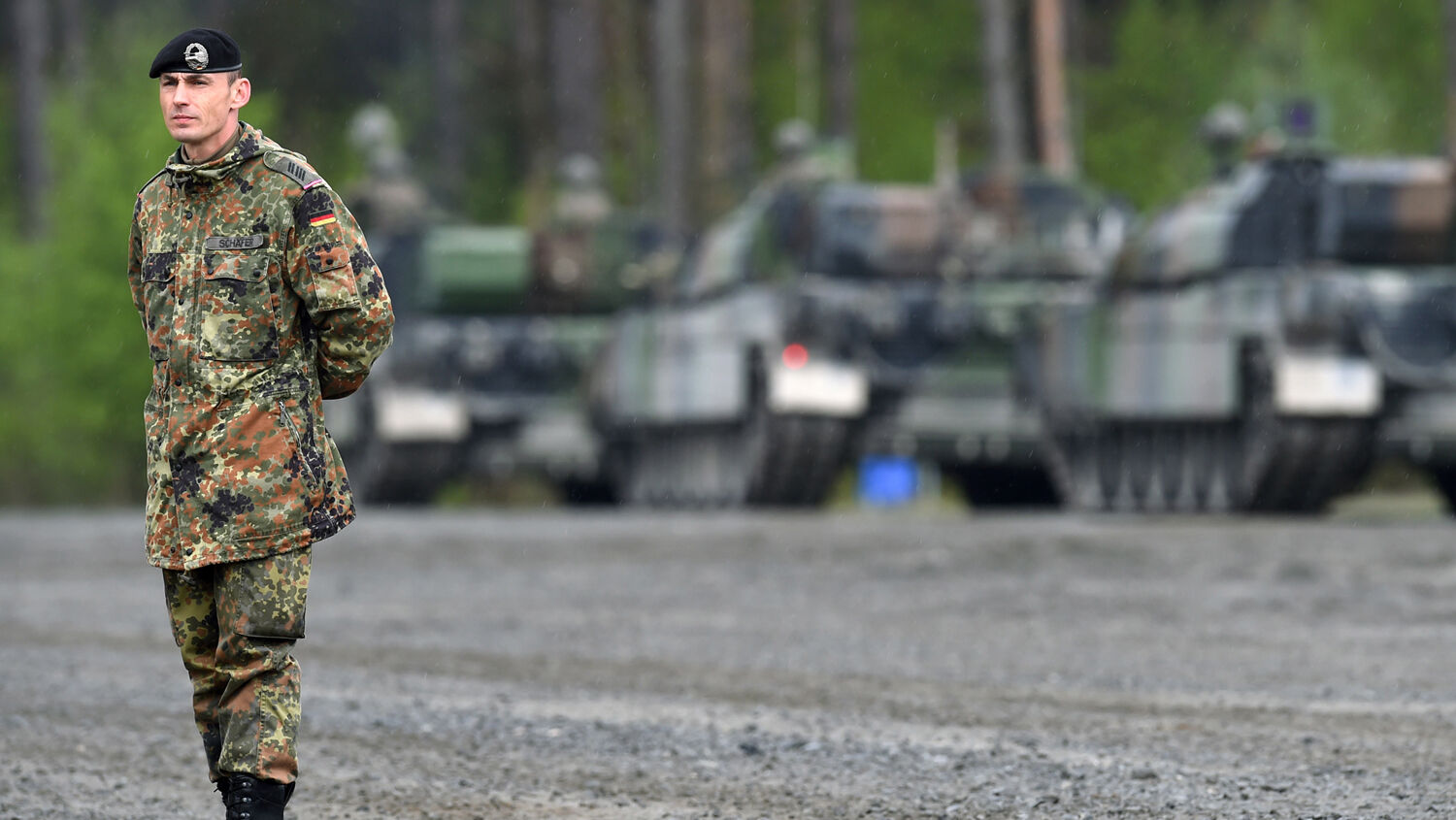 A German soldier waits in front of tanks type during the exercise in southern Germany, on May 12, 2017.
CHRISTOF STACHE/AFP/Getty Images

There have always been Nazis in the German Army.

German Defense Minister Ursula von der Leyen should step down. That is the opinion Spiegel magazine published on May 13, after recent revelations of a right-wing terror group that exists within the German military. The day before, Spiegel reported that one extremist was planning to assassinate top German politicians, including the former president. The Spiegel article claimed that the scandals have reached a breaking point: Apologies and reforms are insufficient—only a major action like the resignation of a minister will give the right sign to the public that the government is taking these problems seriously.

Franco A., a German lieutenant, was arrested on April 26 after he was discovered planning a terrorist attack that he planned to blame on immigrants. Subsequently, 1st Lt. Maximilian T. has been arrested, as well as Mathias F., a student of Franco A.

Documents found with Mathias F. revealed that the group planned to kill top politicians such as former Federal President Joachim Gauck, Justice Minister Heiko Maas and members of the political institutions of the Amadeu Antonio Foundation. The latest issue of Spiegel stated (Trumpet translation throughout):

Officers of the Bundeswehr wanted to assassinate politicians of the Federal Republic and to throw suspicion on refugees. A planned attack by German soldiers on people who represent the institutions of the Federal Republic. A planned attack by German soldiers on the central political project of Angela Merkel. A right-wing extremist network that was able to unfold despite an early suspicion. This is so shocking, so unheard of, that reforms of the Bundeswehr alone will not be enough.

Armies are always sensitive. In them lie the weapon power, the potential for a coup. They are a guarantor of the security of a state, but also a possible threat to the state. In soldiers’ souls, the readiness to be violent must at the same time be unleashed and tamed, which is, of course, an extremely difficult balance.

Von der Leyen blamed the problems on the Bundeswehr leadership. She has ordered reforms like the revision of the Bundeswehr songbook, which she says uses too many songs from the time of Adolf Hitler, and the renaming of army barracks that are named after generals from the same time period. These are good changes, but the problems lie deeper: For 70 years, no one in the Bundeswehr’s leadership has made a serious attempt at tackling these problems. Spiegel summarized the findings last Thursday:

Here is the situation: In the barracks in Sonderhausen, soldiers have been cursed as “genetic waste.” Others had to run until they collapsed. In Pfullendorf, a bar was installed in the lounge, at which a female recruit was meant to dance. Medical instructors forced women to get undressed and permit being touched in the genital area. Afterward, there should have been a “smell” before the assembled team. Lt. Gen. Franco A., who was stationed in Illkirch, wrote a master’s thesis in which he spoke, for example, of the “intermixing of the races.” All this came to light on detours and only by chance.

In other army facilities, swastikas and other objects of Nazi devotions have been found. Throughout the German Army there is a continued admiration for Hitler’s Wehrmacht. Any successful reform would have to deal with changing the overall attitude of the Bundeswehr rather than changing barrack names and songbooks. But bringing the Bundeswehr on the right track is easier said than done because, since its founding, it has followed the wrong tracks.

Over 80 percent of the approximately 15,000 officers who laid the foundation of the German Army in 1959 fought under Hitler just a few years previous. According to German historian Johannes Hürter, even Adolf Heusinger, who was appointed to build the new German Army and later became chairman of the nato Military Committee, served previously as one of Hitler’s advisers. So, it is true that there always have been Nazis in the German Army.

Not only did the fascination with Hitler and his Wehrmacht survive, it began to take on new levels. The latest issue of Spiegel commented that, although the Bundeswehr has had problems with its Nazi past since its founding, “a supposedly planned terror attack on representatives of the democratic state is unique in the history of the German Federal Republic.”

Right-wing extremism is part of the very foundation of the German Army. Thousands of soldiers despise what Hitler did, no doubt, but many tolerate Nazi admiration in their midst. That’s why there are still Nazi-era songs in its songbooks, why the names of the barracks were not changed, and why there is continued admiration for Hitler’s Wehrmacht. That will not change even if von der Leyen resigns. She may be guilty of not dealing with it early enough, but at least she is trying to bring about some changes.

As Spiegel pointed out, when it comes down to it, the real power of a nation lies in its military. The question is what kind of a leader will the Army support in the future. Prophecy tells us that the German military will not submit to the reforms but rather demand a strong leader that thinks the same way it does. How far will this extremism take Germany? Request our free booklet A Strong German Leader Is Imminent to find out.