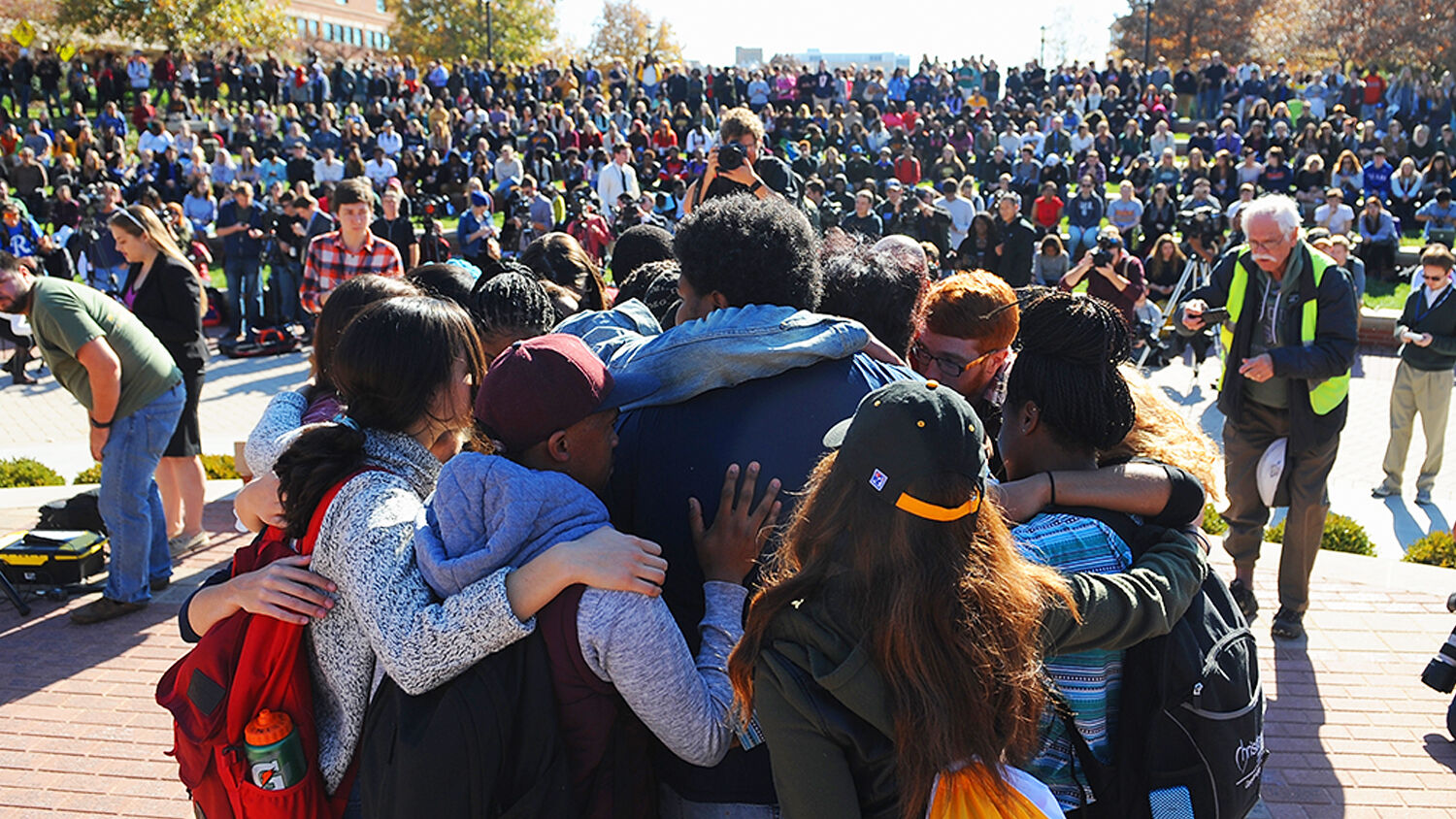 Students embrace one another during a demonstration against racism.
Michael B. Thomas/Getty Images

American society equates victimhood with power, to the point where people are committing crimes against themselves.

For the first time in a century, Kansas State University closed its doors during the school year for something other than bad weather. All classes from 1 p.m. to 3 p.m. were canceled on November 14 for a K-State Unity Walk and a KSUnite rally. Students, faculty and staff left their classrooms, dorms and offices to rally against racism. The events were organized after a Jewish student’s sukkah (a temporary hut used during the festival of Sukkot) was knocked over and a black student’s car was defaced with racist graffiti.

These are outrages worth protesting, except that the sukkah was damaged by storms, not vandals, and the car was defaced by its 21-year-old black owner as a Halloween prank.

Despite the fact that the “hate crimes” that triggered this costly rally never happened, the president of Kansas State University’s Black Student Union spoke at the event, saying, “We are hurt, discouraged and in pain. These incidents cause us to think we are not safe.” He also mentioned a noose hanging from a tree on campus, even though police said its size and shape left no indication that it was meant to symbolize lynching.

While it would be easy to chalk up this overreaction to youthful naivety, these recent incidents are just the latest in an epidemic of fake hate crimes that have beset America.

Two months ago, five black Air Force cadets reported that they had found racial slurs written on whiteboards outside their barracks at the U.S. Air Force Academy Preparatory School in Colorado Springs. In response, Lt. Gen. Jay Silveria delivered a stern speech to the cadets at the school, decrying the “horrible language” and reiterating that there was no place for bigots in the Air Force. The general’s speech was both eloquent and forceful.

Yet it was revealed on November 7 that the person responsible for writing the racial slurs was, in fact, one of the black cadet candidates who reported their existence in the first place.

At least 60 such fake hate crimes have made national news headlines since President Donald Trump’s election last year. So, while the Federal Bureau of Investigation and the Southern Poverty Law Center report a near 5 percent increase in hate crimes since Trump’s election, little is actually known about how prevalent this trend is in America. What is known is that this epidemic of fake hate crimes poses a real threat to innocent people.

A number of violent crimes have been inspired by fake hate crime reports.

Institutions like the Southern Poverty Law Center (splc) justly condemn groups like the Ku Klux Klan, Westboro Baptist Church and New Black Panther Party as hate groups. Yet they also falsely label mainstream groups like the Washington-based Family Research Council (frc) as hate groups just because they oppose abortion and teach that homosexual conduct is harmful to those who engage in it. By labeling the frc a hate group, the splc has actually motivated left-wing extremists to attack them without cause.

“In 2012, Floyd Lee Corkins shot and wounded a security guard at the Family Research Council’s headquarters,” wrote Jeryl Bier for the Wall Street Journal. “Mr. Corkins, who pleaded guilty to domestic terrorism, told investigators he had targeted the group after learning of it from the splc’s website.”

More recently, protesters assaulted a faculty member at Middlebury College during a lecture by social scientist Charles Murray. The protest was organized after the splc labeled Murray a “white nationalist,” without proof. Even James Hodgkinson, the gunman who targeted Republicans at a baseball practice last summer, lent moral support to the splc.

Contemporary American society equates victimhood with power, to the point where people are inventing fake bullies. Some, like the Kansas State University student who spray-painted his own car with racial slurs, are probably just looking for attention. But others, like the leaders of the Southern Poverty Law Center, are acting like General Peisistratos. This ancient Greek politician staged a fake attack on himself to gain the sympathy of the people of Athens as part of a ploy to take control of the city.

Too many people are dishonestly magnifying problems for selfish purposes. They are stirring up bitterness and anger. These emotions are inciting dangers that are even worse than the ones they purport to solve.

“Victim-thinking and hypersensitivity isn’t limited to rampaging elitist college students,” wrote Joel Hilliker in the January 2017 issue of the Philadelphia Trumpet. “It is a spirit that fills our age.”

There obviously are racist and bigoted people in America who do racist and bigoted things. But many groups like Antifa, Black Lives Matter and the Revolutionary Communist Party, U.S.A. are staging riots across America based on false reports and sometimes outright lies. Legions of college students across the nation are actively supporting these movements because biased reporting has led them to believe that the greatest threats to America today are white supremacy and Christian fascism. A dangerous trend toward lawlessness is taking root in America.

In a companion prophecy in Ezekiel 5, God reveals that there will be a time of violent rioting in the cities of America just before they suffer a foreign invasion. The dangerous level of dishonesty and hypersensitivity is contributing to the ultimate fulfillment of this prophecy. For more on this prophecy, read Trumpet editor in chief Gerald Flurry’s article “The Real Agenda Behind Black Lives Matter.”