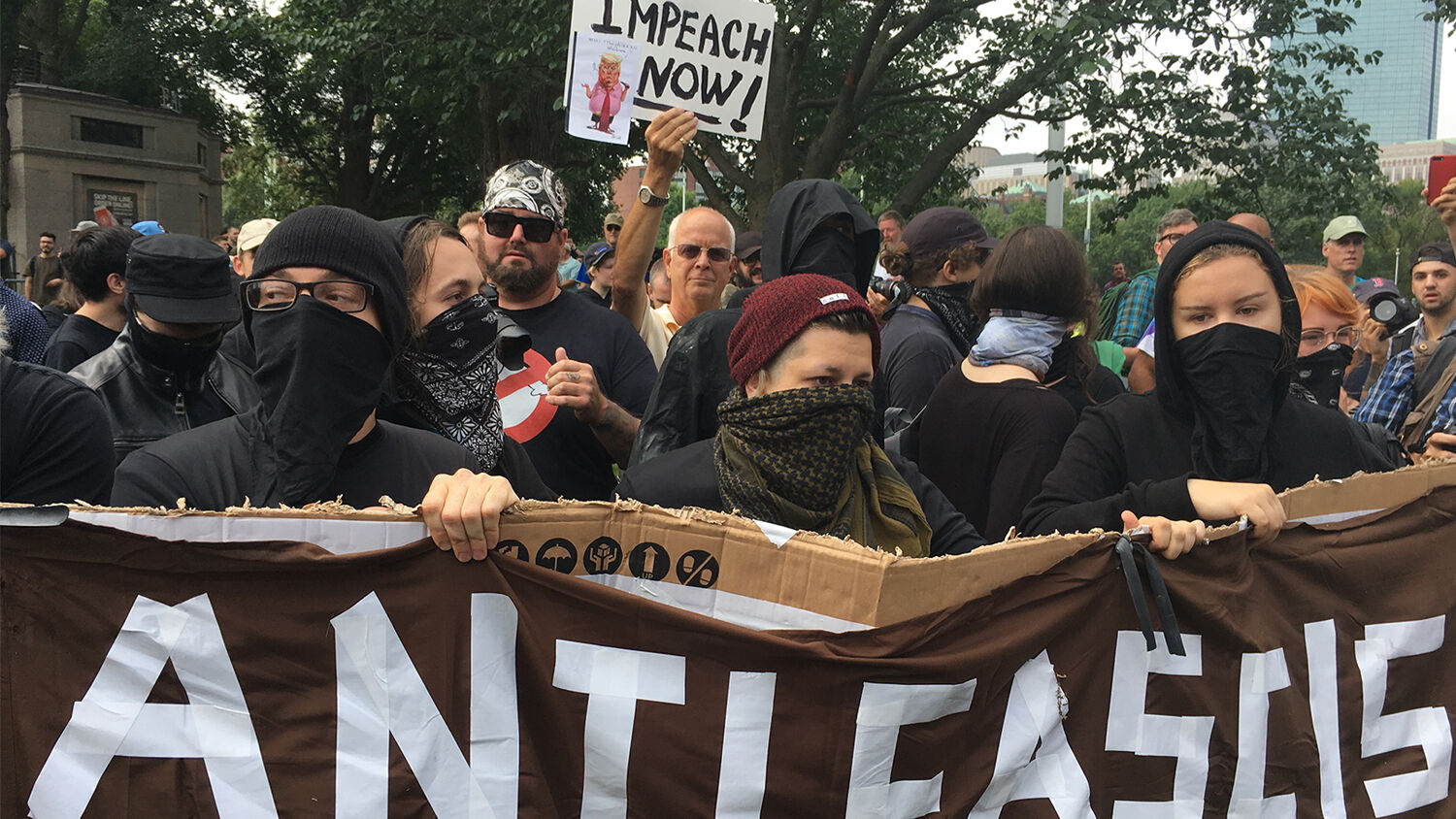 Anti-fascist protesters gather at the entrance of the ‘Boston Free Speech’ rally on the Boston Common in Boston, Aug. 19, 2017.
Getty Images

Thousands of protesters descended on the University of California–Berkeley on Sunday. They came to protest a “No to Marxism in America” rally. The rally was canceled over public safety concerns. But left-wing activists showed up anyway, carrying signs reading, “Berkeley Stands United Against Hate,” and chanting, “No Trump. No kkk. No fascist U.S.A.”

A small number of anti-Marxist protesters did come despite the rally’s cancellation. Police were present to ensure the protests remained peaceful, but several dozen anarchists and Antifa agitators jumped over plastic and concrete barriers to attack the anti-Marxists.

“The violence was swift but brief …,” reported the Associated Press. “Six people suffered injuries, including two who were hospitalized, and one officer was injured while making an arrest and several others were hit with paint.”

Five black-clad Antifa members kicked and punched one man as he desperately tried to protect himself. Another group of Antifa protesters threw water bottles and shot pepper spray at a man wearing a Patriot Prayer T-shirt. He retreated to safety behind a line of riot police as his attackers screamed, “Fascist go home!”

Police arrested 13 people on charges including assault with a deadly weapon, felony assault and violations of the city’s municipal code.

Antifa made headlines on August 12 for brawling with neo-Nazis in Charlottesville, Virginia. Yet no white nationalists were visible in the crowd at Berkeley last weekend. Instead, the “No to Marxism in America” rally was organized by the Oregon-based Patriot Prayer group, which says it supports free speech and the First Amendment of the U.S. Constitution. The group’s Japanese-American leader, Joey Gibson, denounced white supremacy last week, saying that if he supported white nationalism, “I’d have to punch myself in the face.”

The organizer of the event identifies as a transgender person and also supports President Donald Trump. The person accused Berkeley Mayor Jesse Arreguín of promoting an outright lie that the “No to Marxism in America” rally would promote white supremacy.

Antifa thugs and left-wing protesters at Berkeley are falsely equating people who support the Constitution to people who believe the white race is inherently superior. It is an intentional strategy to brand mainstream conservatives, libertarians and other free-speech advocates as racist fascists who are essentially neo-Nazis and Ku Klux Klan members. This is the same rationale that left-wing documentary maker Michael Moore used in a recent cnn interview, during which he smeared the “vast majority” of the 63 million Americans who voted for Trump as racists.

Why do left-wing activists like Moore and members of Antifa repeatedly make the same accusations—accusations that are demonstrably false?

The fact is, groups like Antifa need the threat of white supremacists in order to justify their existence. When they cannot find any Ku Klux Klan rallies to protest against—a common problem, since there are so very few actual members of the kkk in existence—they condemn libertarians and free-speech advocates as fascists. There are much more Americans who believe that the liberties of individuals should not be overwhelmed by the government and who believe in free speech and other constitutional rights. If Antifa can paint these individuals as white supremacists, the “threat” that they pose—and therefore the need for Antifa—becomes much greater.

Antifa itself is a fringe movement, yet mainstream media outlets are promoting its narrative. They are encouraging left-wing terrorist organizations to attack conservative speakers at universities across the nation.

“The media elites provoking them need white supremacy bogeymen in order to achieve their ultimate agenda, which, ironically, is to achieve total supremacy,” writes Stella Morabito at the Federalist. “Against this staged backdrop, repeated over and over again, Americans are being emotionally manipulated to take up cause with those whose ultimate purpose is the repeal of the First Amendment and erasure of national memory.”

There is a dark spiritual force behind such unrest. “Republicans and Democrats are divided like no time before,” wrote Trumpet editor in chief Gerald Flurry. “The radical left is stirring up so many problems in America. Some on the radical left believe they are bringing down President Donald Trump, but are they instead bringing down America itself?”

The Bible actually prophesies that America will suffer a second civil war. Isaiah 1:7 says, “Your country is desolate, your cities are burned with fire: your land, strangers devour it in your presence, and it is desolate, as overthrown by strangers.”

God is pleading with the American people to hear His message. There is a way of escape from the coming civil war. To find out what it is, please watch Gerald Flurry’s Key of David broadcast “Charlottesville Violence—The Real Danger Is Invisible.”