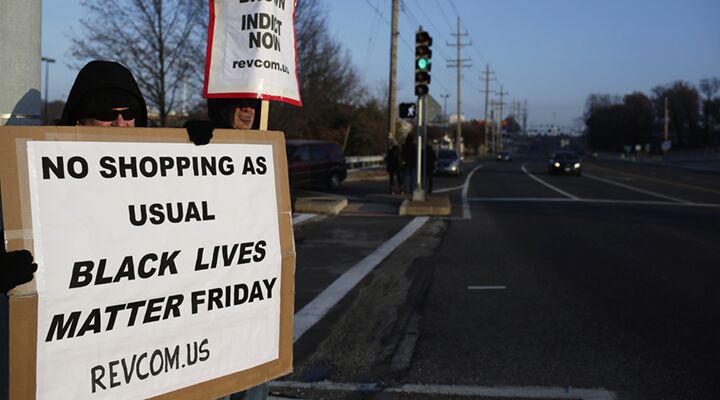 As people around the world watched news footage of rioting and looting in Ferguson last summer, most overlooked one disturbing detail: Many protesters carried signs and banners with the web address of the Revolutionary Communist Party, U.S.A. The majority of mainstream news outlets may have ignored the fact, but it is undeniable that protesters in Oakland, California; St. Louis, Missouri; and New York City, New York, have used the www.revcom.us address extensively.

The Revolutionary Communist Party (rcp) is currently the foremost Maoist party in the United States, though it probably only boasts several hundred members. Its earliest roots stretch back to the Sino-Soviet split of 1962. Favoring the Chinese brand of Communism over the Russian brand, 50 members and ex-members of the Communist Party, U.S.A. (cpusa) split into the Progressive Labor Movement (plm). This Maoist group later split into the Revolutionary Communist Party and Bill Ayers’s Weather Underground.

The Revolutionary Communist Party has played a role in further inflaming tensions in Ferguson.
Unlike the Communist Party, U.S.A., which now believes it is best to work with the Congressional Progressive Caucus and the Democratic Party to gradually transform America into a socialist state, the Revolutionary Communist Party still believes the way to defeat capitalism is through violent revolution. In the words of Mao Zedong: “A revolution is an insurrection, an act of violence by which one class overthrows another.”

Although rcp members in the United States have always been few, the organization still has a long history of agitating and inflaming civil unrest in an attempt to overthrow society. During the days immediately preceding the violence of the infamous 1992 Rodney King riots, rcp National Spokesman Carl Dix circulated a leaflet throughout south-central Los Angeles titled “It’s Right to Rebel.” Many rcp activists were involved in the Rodney King riots, which ultimately left 58 people dead and more than 2,300 injured. Years later, rcp spokesman Joe Veale would recall this tragedy as “the most beautiful, the most heroic civil action in the history of the United States.”

During the Ferguson riots last August, this same rcp National Spokesman Carl Dix was spotted walking along West Florissant Avenue with Joey Johnson and Lou Downey, members of the Revolution Club of Chicago. Johnson was later involved in a scuffle with the police during a particularly confrontational moment when protesters and law enforcement officials were separated by only a few feet. Although the tension between police and protesters died down despite this deliberate agitation, the rcp activists got their way later that night when the situation again devolved into clashes between police and protesters.

While it would be exaggerating to claim that the Ferguson protests were masterminded by Communist activists, it is certainly true that the Revolutionary Communist Party has played a role in further inflaming tensions. Renowned educator Herbert W. Armstrong proclaimed for decades, based on Bible prophecies, that race war is coming to America. This war, however, would not be the result of any inherent superiority of one race over another. Instead, it would be deliberately stirred up by the organized planning of political leaders.

Sadly, true peace will not encompass the Earth until all nations correctly identify the problems plaguing race relations and embrace the true gospel of the Kingdom of God!