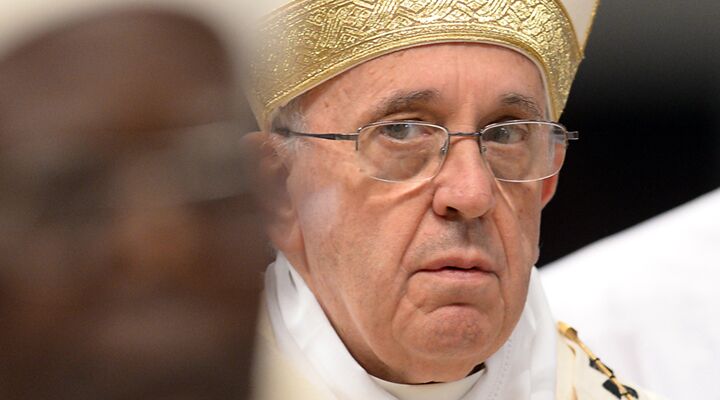 Not once over the last 2,000 years has the Vatican endorsed Muslim control of the Holy Land. Why now?

First Cuba, now the Palestinians. Pope Francis is a man on a mission. But what is his mission exactly? The rhetoric and body language, the gracious gestures, the incessant smiles and compliments give the impression of a selfless leader determined to broker peace, cooperation and tranquility. In Cuba, Israel, and all over this chaotic, disunited planet.

But consider the decisions and actions. In both Cuba and Israel, the Vatican is creating tension, disunity and instability that are likely to lead to conflict and war.

For the Jewish state and its declining number of supporters, the Vatican’s decision was an enormous blow. “This move does not promote the peace process and distances the Palestinian leadership from returning to direct and bilateral negotiations,” Israel’s foreign minister said in a text message to the Associated Press.

“[T]he one thing we can be sure it won’t do is to improve the chances for peace,” explained Jonathon Tobin, senior online editor for Commentary magazine. “By granting the Palestinians official recognition without first requiring them to make peace with Israel, Pope Francis and the church have only made it less likely that this will ever happen” (emphasis added throughout). Others were more dramatic. Abraham Foxman, national director of the Anti-Defamation League, released a statement saying that the Vatican’s action “serves to undermine the only real solution to the decades-old conflict.”

Morton Klein, president of the Zionist Organization of America, warned that the Vatican’s endorsement of Palestinian statehood is a sign of the resurgence of “the historical Catholic enmity towards Jews.”

That remark by Klein is really worth thinking about. Pope Francis and the Vatican are selling this decision as a routine gesture of goodwill toward the Palestinians, and a decision that could even jump-start the peace process. Don’t buy it. The Vatican’s endorsement of the Palestinian cause will add major momentum to the international movement toward Palestinian statehood. This will pile more pressure on Israel to make more concessions, even to the detriment of its existence. And when and if Israel refuses to concede, it is certain to be held responsible for the inevitable tension and conflict.

The Israeli-Palestinian peace process is destined to end in conflict—and the Vatican’s decision brings that day nearer.

The timing is interesting too. Israeli Prime Minister Benjamin Netanyahu was recently reelected and just last week finalized a coalition government that could be more hardline than the previous. Going forward, Israel’s government—justifiably, reasonably and wisely—will continue to be extremely cautious about any sort of peace deal with the Palestinians. Israel’s prime minister is trying to slow the momentum toward Palestinian statehood, convince nations that the PA cannot be trusted, and persuade the international community to demand more from the Palestinians in return for statehood. The Vatican’s announcement undermines all this and makes Prime Minister Netanyahu’s job much more difficult. It was a veiled message to Israel’s conservative government: Don’t get too excited, and don’t get too comfortable.

Imagine Netanyahu sitting down to discuss the peace process with another world leader. Pope Francis supports Palestinian statehood without any demands on the Palestinians, why shouldn’t I? Mr. Netanyahu could hear that refrain from pretty much every world leader he meets. And as long as he refuses to accept a deal in which the other side is not required to alter its genocidal ambitions, Israel’s prime minister will be maligned and ostracized.

It’s also worth recalling the Balkan wars, scenes of which dominated our television screens during the early 1990s. The Vatican, together with Germany, played a key role in instigating Yugoslavia’s dissolution and the long and brutal conflicts that erupted. How? By being one of the first to formally recognize—despite strong opposition from the United States, the European Union and the UN—the breakaway regions of Croatia and Slovenia as independent and sovereign states. Most of the international community dutifully followed along. Within months, the Balkan Peninsula was on fire (for more information on this critical history, read our free booklet Germany’s Conquest of the Balkans).

Will we see similar tension and conflict erupt in Israel as a result of the Vatican’s support of the Palestinians? It seems inevitable.

Consider one last thought. Isn’t it odd that Pope Francis and the Vatican seem to be supporting Muslim control of parts of Jerusalem?

I can’t think of a single moment over the past 2,000 years when the Vatican sincerely endorsed Muslim control of Jerusalem. I can, however, recall multiple occasions when the Vatican riled up Catholic warriors and dispatched them to the Holy Land to wrest control from the Muslims. Why would Pope Francis reject two millennia of Catholic history—even rejecting Catholic doctrine and tradition—and support Muslim sovereignty in the Holy Land? That’s just really odd.

There are two simple reasons the Vatican, for now, is making it appear that it supports a Palestinian state and greater Muslim influence over Jerusalem.

First, it undermines Israel’s control over the Holy Land. When it comes to diminishing Israel’s grip on Jerusalem and its holy sites, the Vatican is quite happy for the Palestinians to do the gritty work. An honest assessment of Palestinian leadership and governance, at least up till now, reveals endemic corruption, mismanagement, infighting and internal strife. Can the Palestinians successfully create a stable, prosperous, safe Palestinian state in Israel? Slim chance.

Second, the Vatican’s endorsement of Palestinian statehood provides ideal cover for its own ambition to wrest control of Jerusalem from the Jews and Muslims.

Reading about the treaty that will be signed this Saturday, one can’t help but wonder: Has the Vatican come to some kind of quid pro quo with the Palestinians? Jerusalem is as important and meaningful to the Catholic Church as Rome itself, probably more so. There are many sites that the Catholic Church considers highly valuable. What has the PA agreed to cede to the Vatican in return for its endorsement of Palestinian statehood? This is conjecture. But this is the way politics, international relations and human nature work. People, nations, even most religions, will feign friendship and peace in pursuit of their goals.

Four years ago, Italian journalist Giulio Meotti, writing for Arutz Sheva, explained how Catholic authorities had “increased their political initiatives for Catholic control over some sites in Jerusalem.” He recalled, for example, how the head of the Vatican’s Council for Interreligious Dialogue, Cardinal Jean-Louis Tauran, had said that “peace negotiations in the Middle East must tackle the issue of the status of the holy sites of Jerusalem.” According to Tauran, the time had arrived for some of Jerusalem’s holy places, including the City of David, to be put under Vatican charge. After all, “it’s practically just the Holy See who is concerned about [Jerusalem],” Tauran stated.

Stories like this are pretty unusual. We don’t often read about the Vatican’s love for Jerusalem and its quest for more control. But it’s there, and it’s thriving. The Vatican is not a non-threatening, neutral third party in this conflict—though so much of the news media believes it is. History shows that Jerusalem is as important to the Vatican as it is to Jews and Muslims. For Catholics, Jerusalem is the birthplace of Christianity and the setting of many important biblical events. The Holy City, as Catholic dogma states, is its universal headquarters.

Does anyone really think the Vatican genuinely wants to cede control of these sites to Muslims?

We need to look past the handshakes and platitudes, and really think about what is going on here. This decision is part of a Trojan horse strategy by which the Vatican seeks to gain the trust of the Palestinians and international community before more actively staking its claim to Jerusalem and its holy sites. Whatever happens, the last thing we can expect is for the Vatican to stand by and cheer as Muslims assume control of Christianity’s holy sites. That is never going to happen.

In fact, putting Jerusalem under “international” control has been the Vatican’s strategy for decades. In 1949, the British plenipotentiary minister (essentially, the ambassador) to the Vatican, John Victor Perowne, wrote that “[t]he Vatican would have preferred, from the point of view of the fate of the holy places and of Catholic interests in Palestine generally, that neither Jews nor Arabs, but a third power, should have control in the Holy Land. Such a solution it well knew, however, was unattainable, and in the actual circumstances it preferred the Arabs to the Jews.”

So here is what is likely to happen, at least in some form. This decision by the Vatican will embolden the Palestinians in their quest for Jerusalem, further ostracize the Jewish state, and increase tensions between Israel and the Palestinians, perhaps to the point of conflict (more terrorist attacks, etc.). As the situation deteriorates, Israel will continue to look for foreign assistance and support. Relations with its traditional allies, America and Britain, are rapidly deteriorating, and these countries have hardly any appetite for supporting Israel, at least in any meaningful way. Russia and China are more on the side of the Muslims than the Jews. Israel will find itself left with one option: crying out to Germany and Europe.

It’s true that Europeans and their leaders aren’t especially fond of Jews and the Jewish state. Then again, Germany, at least its chancellor, is arguably the closest friend and ally Israel has right now. Expect Israel to cry out to Germany for assistance. This is precisely the response the Vatican is seeking!

The European Union and the Vatican both have the same official goal for Jerusalem. They want it to be an international city—controlled neither by Jews nor Arabs, but rather by some third party.

Why does the Vatican want this? In his book Christians and Jews Faith to Faith, Rabbi James Rudin wrote that the Eastern Orthodox churches that own the majority of Jerusalem’s sacred Christian sites oppose internationalizing the city because it “would give greater control of Jerusalem’s Christian sites and institutions to the Roman Catholic Church, which has significant influence in Europe and the Western Hemisphere.”

It doesn’t take much imagination to see the Vatican being given the chief seat in how an “international” Jerusalem is governed! (After all, Pope Francis just brokered peace between America and Cuba.)

Israel is dead against this right now. But as it becomes more isolated and its situation becomes desperate, its resolve will start to crumble.

Of course, this is just one possible scenario. However it happens, the Vatican’s ambitions in Jerusalem are well documented. It desperately seeks greater control over Jerusalem, and every step it takes in its diplomacy with Israel and the Palestinian Arabs is dedicated to this end.