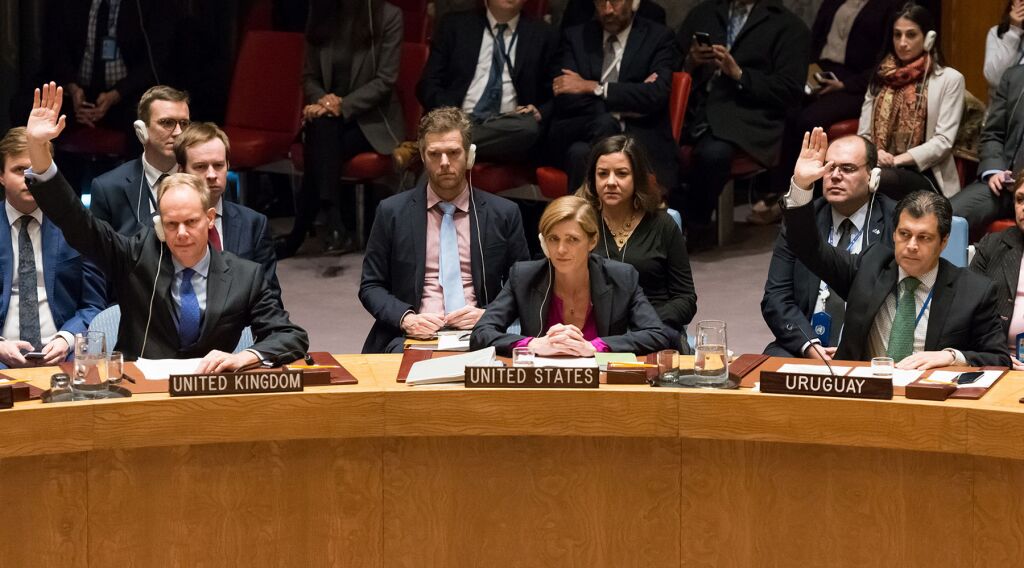 ‘When the chips are down, I have Israel’s back.’

“This was a stab in the back against the Israelis.” It was the “peak of hypocrisy” and “one of the biggest American rebukes of its long-standing ally in recent memory.” With a “dangerous parting shot,” the United States “joined the jackals at the UN.” Most of all, it was a “shameful ambush” of an ally.

These were just some of the reactions to the United States’ abstention from United Nations Security Council Resolution 2334, which, among other things, condemns, reaffirms and reiterates that Israeli homes in the West Bank and East Jerusalem are illegal. But on Friday, December 23, when America refrained from vetoing the resolution, these houses were referred to as impersonal “settlements.”

As the U.S. reversed decades of diplomatic precedent to betray Israel, the room erupted into applause.

But didn’t President Barack Obama affirm his friendship to Israel? He definitely said he would have Israel’s back. Here’s what the president told the American Israel Public Affairs Committee (aipac) in March 2012 (emphasis added):

The fact is, my administration’s commitment to Israel’s security has been unprecedented. Our military and intelligence cooperation has never been closer. Our joint exercises and training have never been more robust. Despite a tough budget environment, our security assistance has increased every single year. …When one-sided resolutions are brought up at the Human Rights Council, we oppose them. When Israeli diplomats feared for their lives in Cairo, we intervened to save them. When there are efforts to boycott or divest from Israel, we will stand against them. And whenever an effort is made to delegitimize the state of Israel, my administration has opposed them. So there should not be a shred of doubt by now—when the chips are down, I have Israel’s back.

On the day after the resolution, Israeli Prime Minister Benjamin Netanyahu noted the obvious fact that America’s abstention was not mere negligence or a change in position by the U.S. It was a “shameful ambush” engineered by the president.

“From the information that we have, we have no doubt that the Obama administration initiated it, stood behind it, coordinated on the wording, and demanded that it be passed,” Netanyahu said on Sunday. “I told John Kerry [that] friends do not take friends to the UN Security Council.”

Former U.S. Ambassador to the UN John Bolton also believes the United States must have cooperated in the resolutions formation. “The sponsors of the resolution … obviously had to consult with the Obama administration to tell them what was in the resolution so that it was sufficient for Obama to order an abstention,” Bolton told Fox News in an interview. “It was entirely predictable for people in the pro-Israel community in the United States. … We should’ve seen this coming.”

In a sort of sick irony, the passing of Resolution 2334 occurred only a day before the beginning of Hanukkah. Israeli Ambassador to the UN Danny Danon referenced the historical event in Israel’s formal response to the UN. He said:

Tomorrow night, Israel and the entire Jewish community around the world will celebrate the holiday of Hanukkah. Over 2,000 years ago King Antiochus [IV] banished the Jewish people from our temple in Jerusalem and issued decrees trying to sever us from religion and our heritage, but we prevailed. The Jewish people fought back. We regained our independence and relight the menorah candles in the temple. …We overcame those decrees during the time of the Maccabees, and we will overcome this evil decree today. …And we will continue to be a Jewish state, proudly reclaiming the land of our forefathers, where the Maccabees fooled their oppressors and King David ruled from Jerusalem.

On the day before the celebration of the Maccabean revolt, it became illegal for thousands of Jews to live in their homes. As analyst Charles Krauthammer put it, the “appalling” resolution “declares that any Jew who lives in the Jewish quarter of Jerusalem—the Jewish quarter, inhabited for 1,000 years—is illegal, breaking international law, essentially an outlaw, [and] can be hauled into the international criminal court and international courts in Europe.”

But, as Ambassador Bolton noted, it was “entirely predictable” for those who haven’t bought President Obama’s pro-Israel rhetoric. In “November 9 and the Onslaught Against Israel,” Trumpet writer Callum Wood wrote that “until now, President Obama has kept quiet on the [Israel] issue for fear of shedding negative light on the Clinton campaign. Post-November 8, that no longer matters.”

“But come November 9, the tables could drastically turn. The Obama administration needs do nothing at all—just sit back and allow the anti-Israel resolutions to surge in,” Wood continued. And that’s exactly what has happened. The special relationship with Israel is over, and now the rest of the world can see it.

Trumpet editor in chief Gerald Flurry pointed to the breaking of the special relationship in his article “What Inspires President Obama’s Relationship With Israel?” In the lead up to Hanukkah in 2015, President Obama hosted Israeli President Reuven Rivlin and his wife for the first of two Hanukkah receptions in the East Room of the White House. Mr. Obama commented that “all of us come together, along with Jews around the world, to celebrate a band of Maccabees who inspire us even today.” Mr. Flurry wrote:

Is that true? Does that history inspire him today? When you look at the diplomatic insults and the hatred the Obama administration has poured on Israel and Prime Minister Benjamin Netanyahu, when you look at the pressure this administration has put on Israel to negotiate with people who use terrorism, and when you look at how openly it has enabled Iran to obtain nuclear weapons and ballistic missiles, wouldn’t you say that a leader like that finds Antiochus more of a model to follow than Judas Maccabeus?

To gain a deeper understanding of the relationship between Israel and the United States, read the above-mentioned articles. They show not only what has happened in the past, but what will happen because of the two nations’ broken relationship. President-elect Donald Trump says “things will be different” at the UN once he’s in office, but long-lasting damage has already been done. The brotherhood between Israel and the United States has been broken—and this was emphasized by Friday’s “shameful ambush” at the UN.