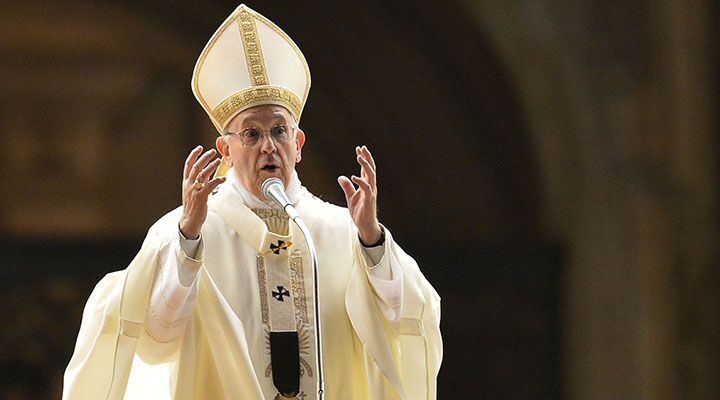 After 500 years, the pope aims to end the biggest split in Christendom—a development that would radically expand the prestige and reach of the Catholic Church.

Pope Francis officially apologized for persecuting Protestants on January 25, as he unveiled plans for a radical push for unity during the 500th anniversary of the Protestant Reformation.

“As the bishop of Rome and pastor of the Catholic Church, I would like to invoke mercy and forgiveness for the non-evangelical behavior of Catholics toward Christians of other churches,” he said. “At the same time, I invite all Catholic brothers and sisters to forgive if today, or in the past, they have suffered offense by other Christians.”

“Non-evangelical behavior” is an interesting euphemism for the massive violence unleashed in the wake of the Reformation. Modern scholars estimate 50 million died in the religious violence that followed in persecutions, counter-persecutions and religious wars.

But the pope and Protestant leaders are prepared to put all that aside as they get ready for the 500th anniversary of the Protestant Reformation.

The commemorations will kick off on October 31 this year, 499 years to the day since Martin Luther is traditionally held to have nailed his 95 Theses to the door of the All Saints’ Church in Wittenberg. These 95 Theses outlined Luther’s disagreement with the Catholic Church, and their publication began the great splitting away of protesting churches from Rome.

In January, the pope announced that to mark the beginning of this 500th anniversary year, he would travel to Lund, Sweden, where the Lutheran World Federation was founded, and hold a joint service with Lutherans. The two groups will hold a joint worship service with a common prayer.

This will only be the beginning of what could be a dramatic year. Lutheran leaders have said in the past that they hoped to fully heal their divide with Rome during this 500th anniversary year.

Catholic-Lutheran unity has already taken great strides over the past couple of decades. In 1999, the Lutheran World Federation signed a Joint Declaration on the Doctrine of Justification with the Vatican. The doctrine of justification was at the heart of Luther’s disagreement with the Catholic Church that led to his excommunication—now that disagreement has been overcome.

In 2007, the Catholic Church along with Lutheran, Orthodox, Methodist, Anglican and Armenian-Apostolic churches in Germany all agreed to recognize each other’s baptisms as valid.

“Five hundred years ago, wars were fought over the very issues about which Lutherans and Roman Catholics have now achieved consensus,” said Evangelical Lutheran Church in America’s presiding bishop, Elizabeth A. Eaton. There are still some points of disagreement, and talk of achieving full communion in 2017 has died down in recent years, but so much of the heavy lifting has been done already.

The Catholic Church is making great strides in its push for unity with other churches. The other great split in the church—the Orthodox Schism that was formalized in 1054—is close to being fully healed. A Catholic can show up at an Orthodox service and receive communion and, in many cases, vice versa (there are different strands of Orthodox Churchs, so they lack a common position). The major remaining disagreement revolves around the role of the pope. All agree on his preeminence, but not all Orthodox churches agree with the Catholic Church on how much power he has.

In 2013, America’s largest Presbyterian church, along with other major Protestant groups, signed an agreement with the Catholic Church recognizing each other’s baptisms. The Catholic Church is even making progress with Pentecostals. Pope Francis has held receptions with top American televangelists, including Joel Osteen’s visit in 2014.

In 2014, the pope sent a recorded message to Kenneth Copeland Ministries, a large Pentecostal group, seeking unity. “Brothers and sisters, Luther’s protest is over. Is yours?” asked a speaker at the event. The pope also beseeched the audience, “I am [yearning] that this separation comes to an end and gives us communion.”

Many of these groups have loudly condemned the Vatican for hundreds of years. For them to be seeking unity now is a major change.

It is interesting that the Catholic Church is focusing on healing this divide while Europe as a whole grows increasingly desperate for unity. The Trumpet has long said that the Catholic Church would play a major role in unifying Europe. “Once again, the only unifying authority which the coming 10 nations of Roman Catholic Europe can accept is the pope of Rome!” Herbert W Armstrong wrote in the July 1961 Plain Truth magazine.

Even back then, Mr. Armstrong saw the potential for religious unity and political unity to be linked. This was even before the Vatican ii council—the famous Catholic meeting that revolutionized the church’s approach to outside groups and began laying the groundwork for the type of unity the church is seeking now.

“The nations of Europe want to go together. Yet they are competitive against each other. They distrust each other. The Common Market is knocking down the chief competitive barrier—trade,” he wrote in that same article. “Another serious barrier has been religion. Protestants have been unwilling to submit to the authority of the pope. But that barrier, too, is fast crumbling …. Everywhere there is a relaxing of Protestant opposition against the Roman Catholic Church.”

“Today, both economic and religious barriers to a United Europe are greatly weakened,” he wrote. “The pope is the one political leader who can demolish the political barrier. The stage is set. All that is needed is a new fear for their common safety from Russia.”

The superstate that EU elites want to create is not possible without some kind of common heritage—which is why we see it on the brink of collapse today. Only the Catholic Church can provide that heritage. Having close relations with Europe’s other major churches is a necessary precondition.

As Mr. Armstrong pointed out, that is already in place. No major religious group in Europe opposes the Catholic Church or the pope in principle—there are merely a narrowing number of doctrinal disagreements.

But would the Vatican be better placed to unify Europe after going even further toward unity with its daughter churches? Or could church unity follow on the heels of European unity? It seems plausible that the two could be related. Many academics and analysts seeEurope’smain divide as being between the Protestant north and the Catholic south, with things like the euro crisis described as a symptom of this religious and cultural split.

Bringing the church bearing the name of Martin Luther back into the fold would certainly be a huge prestige boost for the Catholic Church. It would also dramatically increase its reach. Thirty percent of Germans are Lutheran, for example—about the same percentage that are Catholic. The pope would be able to speak for the overwhelming majority of Europe’s Christians.

In 1963, in the midst of the Vatican ii council, the Plain Truth reported:

Today, the time is ripe—according to official Catholic views—for making the final effort to unite the church bodies of the Christian world. The mighty problem of achieving unity is twofold. First, it involves reconciliation of the Orthodox Schism that officially commenced in 1054 and divided the churches in the East—Greece, Russia, the Balkans and the Near East—from Rome. Second, it involves restoration to the Roman communion all Protestantism, which developed from 1517 onward.

The first problem—the “reconciliation of the Orthodox Schism”—is nearly resolved. The only real exception here is the Russian Orthodox Church, which is a tool of the Russian government and therefore less keen on submitting to Rome. The second divide is almost resolved as well.

Of course, there will be holdouts who will not return to Rome voluntarily. These would have to be dealt with after a strong political union is in place.

Today we see an economic crisis, fear of terrorism, and fear of Russia all pushing Europe together. Meanwhile the Catholic Church has already made great headway toward unity with Lutherans. Full unity would not just be of interest to religious people—it would have real-world, geopolitical implications. As Mr. Armstrong wrote, “[T]he stage is set.”

For more on what this unity will mean for the world and how it will be achieved, read the article “Returning to the Fold” from our free booklet He Was Right.