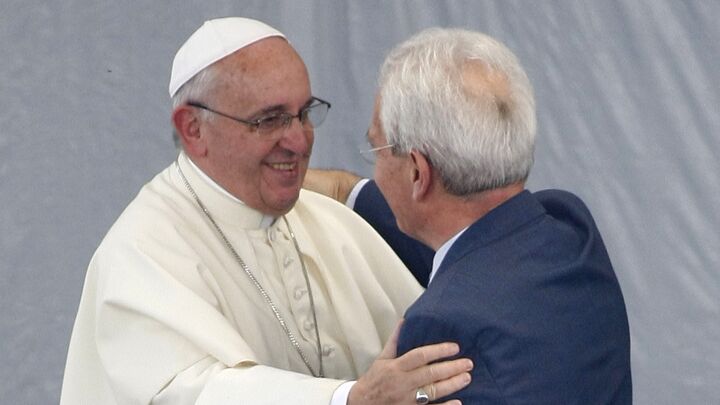 ‘The goal of full unity may seem distant, yet it remains the aim, which should direct our every step along the way.’

Pope Francis became the first-ever pope to visit a Pentecostal church on July 28, as he formally apologized to Italy’s Pentecostals for the persecution they suffered at the hand of the Catholic Church during the fascist dictatorship of Benito Mussolini.

“Among those who persecuted and denounced the Pentecostals, almost as if they were crazy people trying to ruin the race, there were some Catholics,” Francis told a congregation of 350 Pentecostals in the southern Italian city of Caserta. “As the pastor of the Catholics, I ask forgiveness for those Catholic brothers and sisters who did not understand and were tempted by the devil.”

This trip is part of a broader effort that has seen the pope reach out to Protestant and evangelical leaders around the world. The Italian Pentecostal leader, Giovanni Traettino, whom the pope met in Caserta, is an old friend.

The pope acknowledged the significance of his visit to this Pentecostal group. “Someone will be surprised: ‘The pope went to visit the evangelicals?’ But he went to see his brothers,” he commented.

Pope Francis has worked hard to unite the different Christian factions. He has picked up where his two predecessors left off. In a March message, Pope Francis said, “Divisions among us, but also divisions among the communities: evangelical Christians, orthodox Christians, Catholic Christians, but why divided? We must try to bring about unity.“

This one statement proves the pope’s purpose for his recent actions, such as the trip to Caserta to visit the Pentecostals. This trip was a part of the bigger objective of uniting all Christian factions.

This trip was a part of the bigger objective of uniting all Christian factions.
Joel Osteen visited the Vatican in early June “to promote ecumenical prayer and interfaith understanding.” Pope Francis in recent months has received more than a dozen American Protestant leaders including a few well-known televangelists to discuss the question: “Can we find common ground in order to advance the life and ministry of Jesus so more people can experience the joy of Christian faith?”

Pope Francis sent a recorded message via Anglican Bishop Tony Palmer to Kenneth Copeland Ministries seeking more unity between the two groups. Before playing the recording, Tony Palmer implored the audience for reconciliation with the Catholics. He said, “Brothers and sisters, Luther’s protest is over. Is yours?” The pope also beseeched the audience, “I am [yearning] that this separation comes to an end and gives us communion.”

Pope Francis recently also reached out to the Anglicans. During a private session at the Vatican in June, he encouraged Archbishop of Canterbury Justin Welby to unify with the Catholic Church. Pope Francis said their division was a “scandal and an obstacle to our proclaiming the gospel of salvation to the world.”

Archbishop Welby assured Pope Francis that the Anglican Communion was fully committed to serve the call of Christ with the Catholic Church as a Christian family. The two biggest Christian leaders also signed an agreement in March to support the anti-slavery and anti-trafficking initiative. Welby said at the time, “No one of us is strong enough, but together we are ready for the challenge God is placing before us today ….”

The Anglican Communion is warming to the invites of Pope Francis to become unified—to return to the Catholic fold.

The fact the Protestant leaders are now meeting with the pope is noteworthy—it wasn’t long ago that many of them viewed the Catholic Church as the “great whore of Babylon.” The pope has also been seen by the Protestants as an antichrist. Protestants are known for their harsh anti-Catholic rhetoric, which has offended many Catholic leaders around the world. The meetings show how much the Protestants have weakened their anti-Catholic stance. They are now embracing unity with the once-hated Catholics.

This unification of Catholics and Protestants has long been forecast.

The meetings show how much the Protestants have weakened their anti-Catholic stance. They are now embracing unity with the once-hated Catholics.
From the early 1930s, Herbert W. Armstrong spoke out about a coming unity between Catholics and Protestants. Notice this excerpt from the Plain Truth in 1961: “The pope will step in as the supreme unifying authority—the only one that can finally unite the differing nations of Europe. The iron jurisdiction over both schools and religion will be turned over to the Roman Catholic Church. Europe will go Roman Catholic! Protestantism will be absorbed into the ‘mother’ church—and totally abolished” (October 1961).

At that time, any kind of reconciliation between Catholics and Protestants seemed impossible to most. But look at the situation today: Pope Francis is helping reconcile the “rebellious” daughters with the mother-church.

To understand the purpose for this unification, read Trumpet executive editor Stephen Flurry’s article “Returning to the Fold.”