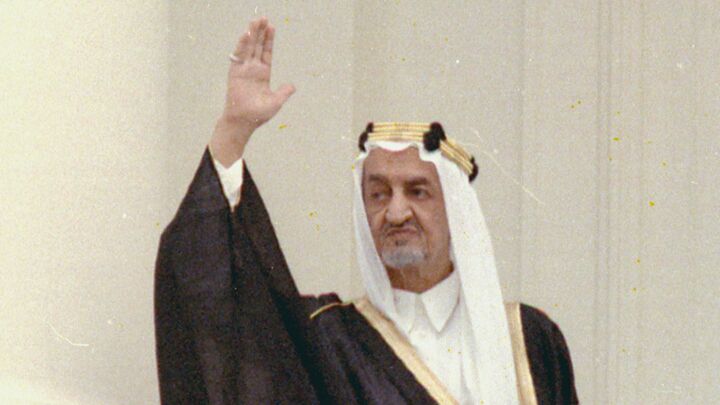 In 1945, during the historic United Nations conference in San Francisco, Herbert W. Armstrong was granted 48 minutes with the Saudi Arabian delegation headed by Prince Faisal. The meeting was used as an interview for the Plain Truth magazine and the World Tomorrow radio program. Two years later, Mr. and Mrs. Armstrong were introduced to the future King Saud and his wife at a reception in London. That same year, Prince Faisal, while in New York, was displeased by President Truman’s support of the division of Palestine into Arab and Israeli states. As a result, just months later, in 1948, his father, the king, sent troops to support forces attempting to destroy the fledgling Jewish state.

Prior to the king’s death in 1953, he appointed his eldest son, Saud, to succeed him. His second eldest, Faisal, was appointed as the country’s foreign minister. When the Egyptian monarchy was overthrown by Gen. Gamal Nassar and his military, the United States responsively strengthened ties with the Arabian kingdom. President Dwight Eisenhower signed a special oil-security deal with Prince Faisal during a state visit to Washington in 1957. King Saud’s reign was marked by controversy and opposition. Seven years later, at the decree of the religious leaders, he abdicated in favor of his brother Faisal.

As king, Faisal set about establishing an economic and educationally focused program of national modernization. Income from oil exports rose 1,600 percent under his rule, which ensured major boosts to infrastructure projects such as transportation and communication links. The profits from the kingdom’s most prized resource gave its subjects a handsome welfare system, which also exempted citizens from paying tax.

In conjunction with the kingdom’s history, King Faisal’s progressiveness had to be balanced by the religious elite. He appeased them by opening the country to Muslim radicals, particularly from Syria and Egypt, where military-supported administrations were suppressing extremism. In Saudi Arabia they found a home, recruited to educate the royal subjects’ children, which included females.

The king oversaw the establishment of a national television station. Religious hardliners protested this station and clashed with police, resulting in the death of one of King Faisal’s nephews. This event would prove pivotal to his future assassination.

In 1967, the Six-Day War between Arabs and Israel resulted in the trouncing of Arab forces and prompted anti-U.S. riots in Saudi Arabia at Aramco’s oil facility. Tensions continued to simmer as the Arab League pressured Faisal to shut off supply to America for its support of Israel. In 1973, the Arabs sought revenge against Israel with a coordinated attack led by Egypt and Syria. Once again, America’s support of Israel was met with fury by the Arab League. This time, its pressure was too much for King Faisal and he agreed to stop supply of oil to the U.S. President Nixon’s envoy, Henry Kissinger, was sent to broker a deal. The U.S. was in the midst of the Vietnam War and was thus consuming more oil. Faisal later relented in a secret deal, which secured oil supply for the U.S. Navy. The following year, the oil embargo ceased.

In mid-September 1974, Mr. Armstrong visited Cairo to confirm plans for a pending personal appearance campaign with President Anwar Sadat’s deputy, Dr. Mohammed Abdul Lader Hattem. “Plans were also made for Dr. Hattem to accompany Mr. Armstrong on a private visit with King Faisal of Saudi Arabia,” reported the Worldwide News (Oct. 14, 1974). Then, on October 30, Mr. Armstrong delivered the gospel of the Kingdom of God to 100 senior officials gathered at the Nile Hilton Hotel. It was in during this speech that he spoke of his meeting with the Arabian king and the good rapport he had with the Saudi monarchy.

“This morning, too late for the morning newspapers in New York, where I happen to be, King Faisal of Saudi Arabia was assassinated,” Mr. Armstrong wrote to co-workers on March 25, 1975. During a meeting with the Kuwaiti petroleum minister, a disenchanted nephew shot the king at point-blank range, avenging his brother’s death from 10 years before at the opening of the national broadcast television station.

“It was all set up for a meeting between myself and him, possibly on this next trip in April. In many ways King Faisal was the most outstanding of the Arab heads of state. Tall, dignified in his Arab headdress and flowing robes, he was a very picturesque figure” (ibid).

The king’s sudden death did not prevent Mr. Armstrong’s dialogue with Saudi Arabia, which continued through interaction with ambassadors who attended his numerous testimonial dinners. During these dinners they received as a witness Jesus Christ’s good news of the coming Kingdom of God (Matthew 24:14).

In Saudi Arabia, the royal family holds the majority of leadership posts, which ensured God’s good news of an impending divine Kingdom and world-ruling government reached the Saudis via the internationally recognized ambassador for peace having direct contact with its leading international envoy, ambassadors, princes and kings (Revelation 19:16).