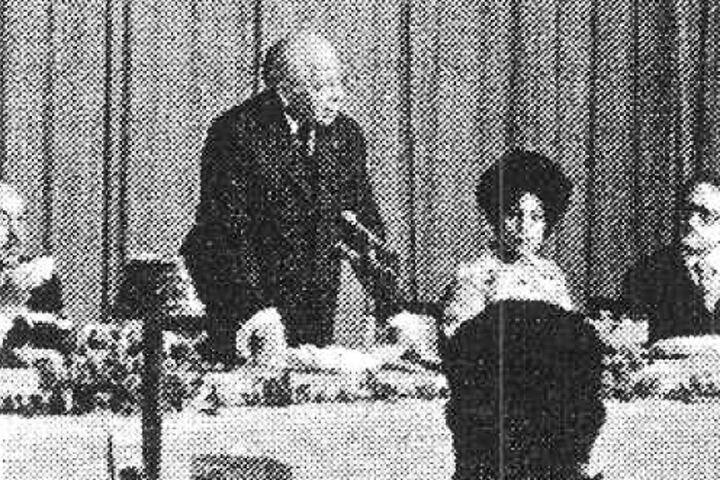 A message loved by Anwar Sadat, honored by Abdel Kader Hatem, forgotten by Hosni Mubarak and rejected by the Muslim Brotherhood

The world unknowingly awaits the fruits of its endorsed removal of Hosni Mubarak and support of the Muslim Brotherhood leadership as historic elections loom in Egypt. The result is bound to lead that nation toward a prophesied clash of civilizations with a rising European power dominated by Berlin and Rome on its march toward the accomplishment of its Holy Roman imperial ambitions.

Amid this tension it’s timely that we remember a message once delivered to Egypt’s elite, openly supported by its leaders at the time, revealing the way of peace.

On Oct. 30, 1974, by the banks of the Nile River, internationally recognized ambassador for peace without portfolio Herbert W. Armstrong attended a testimonial dinner hosted in his honor by over 100 dignitaries, including several government officials, gathered at Cairo’s Nile Hilton Hotel.

He was introduced by his friend Dr. Abdel Kader Hatem, whom Time Magazine reported some months later was “Egypt’s No. 2 man, second only to President Anwar Sadat.”

At the time of the testimonial dinner, Dr. Hatem was deputy to the president and chairman of the National Council for Science and Education.

Mr. Armstrong reminded the assembly of his history with Egypt’s leaders dating back to 1945, when at the signing of the United Nations Charter in San Francisco, he met Sheik Hafiz Wabba prior to his first visit to Egypt in 1956 and visit with Prince Saud before his coronation as king. He told those in attendance it was his fourth visit to Egypt that year.

His speech ranged from explanations of his friendship with his Japanese sons and a recent visit together with them to Egypt, to the paradox of technological advancement contrasted with appalling world evils. He detailed his presentation by King Leopold of Belgium of a watch cast from a World War ii iron cannonball in context of citing the cause and effect of man’s insoluble problems. In addition, the guest of honor shared some of his business experiences and the challenge he received in 1926 regarding the theory of evolution and how it led him on a search of the way to true values.

“And this whole world is based on the get principle,” he told the elite audience. “Or in other words, you could call it the competitive principle. Everything is competition: man against man.”

He went on to say, “The give way is the way of outgoing concern. I was interested one day in finding a good definition of the word—l-o-v-e. The real definition is an outgoing concern toward the one loved, a concern for the welfare of the other equal to your self-concern. And not very many have that” (Worldwide News, Dec. 9, 1974).

Mr. Armstrong was speaking to the leaders of Egypt sharing with them the way of peace. His speech was replete with references to give, love and outgoing concern, which drew vivid word pictures of the law of God codified in His Ten commandments given atop Mount Sinai.

He recounted how he’d put this principle of give into action for over 40 years and recalled God’s blessings in his life and Ambassador College, citing various fruits including the worldwide reach of this message via the mass media of the day, print and broadcast.

“These main questions that I am interested in are the basic questions of life,” he stated. He went on to ask: “What are we? Why are we? Is there purpose? Where are we going? What is the way? What is the way to have peace, to have happiness, to make life beautiful and worthwhile? What are the true values?” (ibid).

Concluding, Mr. Armstrong painted a sober picture of mankind reaching the point where it has the nuclear capability to erase all life. He warned of the potential of a “small country” gaining nuclear power and forcing the larger nations into a catastrophic conflict. Today, as often reported by Trumpet founder Gerald Flurry in its prophetic context, we see just that in the Mideast, with Iran’s development of nuclear weapons, threats to annihilate the state of Israel and radically expansionist Islamic ambitions.

Mr. Armstrong expressed his desire to return to Egypt and speak some more on these issues and the give way. Dr. Hatem thanked him and cited a well-known Egyptian proverb that stated that “he who drinks the water of the Nile will return.”

It would be Dr. Hatem who would later introduce Mr. Armstrong personally to President Anwar Sadat, the two thereafter forming a strong bond developed in seeking peace in the Middle East together in conjunction with another friend of Mr. Armstrong’s, Israeli Prime Minister Menachem Begin.

These two world leaders invited their mutual unofficial ambassador friend to join them in the planning and establishment of a world peace center to be built at the base of Mount Sinai, territory given back to Egypt by Israel after its capture.

These three men worked tirelessly within their respective realms of influence to establish a symbol of peace for the world. Mr. Armstrong’s involvement would lead to the way of peace being momentarily restored.

Upon announcing this peace center project, President Sadat declared, “It will be a living symbol of the brotherhood of man, a lighthouse that will rekindle the spirit of coexistence and tolerance among nations.

“As we look at the world today, we realize the great need for a reminder of the oneness of human destiny and the continuation of the divine mission, which is in essence, a great act of mercy. This monument must light the path of the generations yet to come.”

With his sudden assassination by those he thought loyal partnering with the Muslim Brotherhood, the way of peace that was momentarily restored, along with Sinai peace center project, broke down under Hosni Mubarak’s leadership and failed to attain the avowed goals of Egypt’s fallen president.

For over two decades, our editor in chief, Gerald Flurry, has dedicated his life to continuing Mr. Armstrong’s message. He has visited and recorded television programs for the Key of David program at the base of mount Sinai, heralding the way of peace, prophesying of Egypt’s assimilation into the radical Islamic realm led by Iran, and recently releasing his newest booklet The Way of Peace Restored Momentarily, which recounts this historic Sinai peace Center’s planning and its hope-filled road toward its establishment as a monument to world peace so drastically interrupted with the assassination of its chief benefactor.

Yet, world peace will soon come, despite the prophesied trauma that will precede it.

Request your copy of The Way of Peace Restored Momentarily today to learn of how you individually can be at peace while working for the establishment of genuinely true, global peace. By doing so you will learn how to contribute to “light the path of generations yet to come” by supporting the message of peace heralding its soon-coming implementation worldwide—true world peace for all mankind soon to be imposed by our supreme benevolent Creator who won’t just offer water from the Nile, but rather give freely of the water of life forevermore.