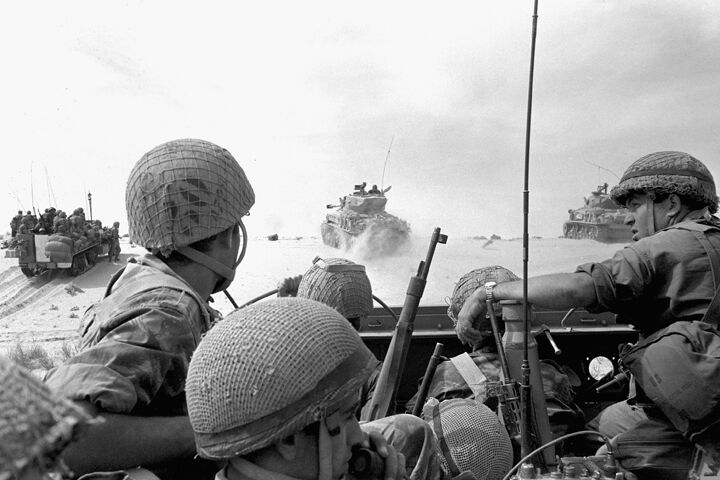 How the 1967 war stopped Herbert W. Armstrong broadcasting on Jerusalem Radio and fulfilling a dream of King Hussein of Jordan

By 1967, the Old City of Jerusalem was part of the Hashemite kingdom. At this time, Jordan’s King Hussein planned a major surge in power of Jerusalem Radio, boosting it to a million-watt station rivaling Egyptian President Gamal Nassar’s Cairo-based broadcaster.

However, for the king to attain his broadcast aspirations he needed the help of unofficial ambassador for world peace Herbert W. Armstrong. Even as political tensions rose in the Mideast, negotiations culminated between the Jordanian government, Mr. Armstrong and officials of the World Tomorrow program.

“A four-year contract had been negotiated, the cost of which would finance the new equipment to that tremendous power” of Jerusalem Radio’s million watts, Mr. Armstrong wrote. “It was the very next morning after the funeral and burial of my wife, after 50 years, less three and one half months, of happy marriage, that I boarded a PanAm polar flight for Amman, Jordan.” Here he met Ambassador College officials from England, en route to final negotiations with Adlay Muhtadi, communications representative for the Jordan government.

“We drove to the station just outside Jerusalem and back. The contract was signed,” Mr. Armstrong recounted.

“But on the Sunday morning in June 1967, when I was en route from the campus in England to London airport, to go to Jerusalem and put on the first broadcast in person, the Six-Day War with Israel had started. Six days later, Jerusalem and that station were in Israeli hands!”

Following this dramatic chain of events, Mr. Muhtadi traveled to England, and upon arriving at the college in Bricket Wood, offered Mr. Armstrong half the price of the original contract for airtime, but now on Radio Amman. A deal was struck! The pair came to terms and as such, Mr. Armstrong made a major humanitarian charitable contribution to the Hashemite kingdom, as the funds were used to aid refugees of the Arab-Israeli war.

Perhaps one of the most astounding outcomes of this historic drama came in the form of the mind change of Mr. Muhtadi. He would return numerous times to the beautiful college grounds in the British countryside in an effort to become more acquainted with the international cultural and humanitarian endeavors headed by Mr. Armstrong. These endeavors Mr. Armstrong termed at the time, “our extension program of education worldwide,” in reference to what was to formally become, two years later, the Ambassador International Cultural Foundation (aicf).

Mr. Muhtadi “came to believe wholeheartedly in the message and what we were doing,” Mr. Armstrong recalled. In 1972, “he joined our organization, moving his family to Bricket Wood, England.”

This Jordanian dignitary set about promoting Mr. Armstrong’s various activities by bringing other “high-ranking men of the Arab world” onto the Ambassador College campuses in England, Texas and Pasadena.

It was through these series of miraculous events that other doors opened for Mr. Armstrong to preach Jesus’s prophesied gospel of the coming Kingdom of God to Jordan and Lebanon.

In retrospect, 1967 was a most dynamic year for this unofficial ambassador for world peace. After the sudden death of his wife, the Jerusalem Radio incident and Jordanian breakthroughs, he would later meet with King Leopold of Belgium, President Shazar of Israel and Prince Mikasa of Japan.

Through these events he was catapulted forward into a new and dynamic phase of his life’s work. The ensuing 17 years would be spent in the relentless pursuit of reaching world leaders in person with Christ’s commissioned message of Matthew 24:14.

During January 1986, when the news of the death of this unofficial ambassador for peace reached King Hussein and Queen Noor, his friend Adnan Abu Odeh wrote, “Their majesties instructed me to convey their heartfelt sympathies and condolences on the passing away of Mr. Herbert W. Armstrong and their hope that the life of benevolence, altruism and the drive for a better understanding among peoples which Mr. Armstrong led will continue to be the inspirational path for others to follow” (Good News, May 1986).

Following its humble beginning back in 1996, the reborn and refreshed extension of aicf, Armstrong International Cultural Foundation, under the direction of the Trumpet’s editor in chief, Gerald Flurry, first set about to serve the Mideast kingdom of Jordan by collaborating with the Al-Hussein Society, reviving the support Mr. Armstrong had previously given it.

As founder and chairman of the Armstrong International Cultural Foundation, Mr. Flurry then lent support to the Petra National Trust, with its vision and mission of conserving, preserving and sustaining the historic city of Petra and joined in supporting its “projects and programs to safeguard and maintain site significance and integrity for Jordan and the world.”

Foundation efforts over the past two decades, initially serving Jordan and more recently Israel, plus its excellent concert series performed at the Armstrong Auditorium in Oklahoma, offer proof that Mr. Flurry is honoring the Jordanians’ royal “hope that the life of benevolence, altruism and the drive for a better understanding among peoples which Mr. Armstrong led will continue to be the inspirational path for others to follow.”

In their messages of condolence upon Mr Armstrong’s death, that was also the request of emperors, kings, queens, princes, presidents and prime ministers, along with a myriad of dignitaries from around the globe who met and worked with Mr. Armstrong and the foundation during his life.

Through its current efforts, Armstrong International Cultural Foundation continues its contribution toward bringing about understanding between all peoples in the march toward the soon-coming world peace to be imposed by the King of kings.