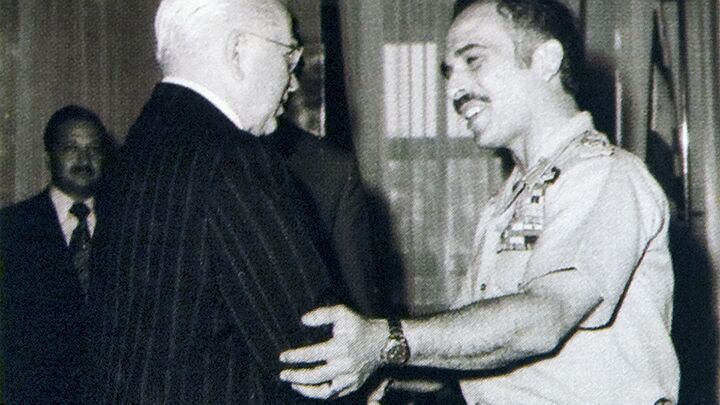 In 1966, Herbert W. Armstrong began broadcast negotiations with a personal aide of Jordan’s King Hussein, and preparations were set for a meeting between the two.

By 1967, the Old City of Jerusalem was part of the Hashemite kingdom. At this time, Jordan’s King Hussein planned a major surge in power of Jerusalem Radio, boosting it to a million-watt station rivaling Egyptian President Gamal Nassar’s Cairo-based broadcaster.

However, for the king to attain his broadcast aspirations he needed the help of the unofficial ambassador for world peace. Even as political tensions rose in the Mideast, negotiations culminated between the Jordanian royalty, Mr. Armstrong and officials of the World Tomorrow program.

“Let me brief you…. A four-year contract had been negotiated, the cost of which would finance the new equipment to provide that tremendous power” of Jerusalem Radio’s million watts, Mr. Armstrong wrote. “It was the very next morning after the funeral and burial of my wife, after 50 years, less three and one half months, of happy marriage, that I boarded a Pan Am polar flight for Amman, Jordan” (co-worker letter, Sept. 24, 1973).

Here he met Ambassador College officials from England, on the way to final negotiations with Adlay Muhtadi, communications representative for the Jordanian government and former chief adviser to King Abdullah i.

“We drove to the station just outside Jerusalem and back. The contract was signed. But on the Sunday morning in June 1967, when I was en route from the campus in England to London airport, to go to Jerusalem and put on the first broadcast in person, the Six-Day War with Israel had started. Six days later, Jerusalem and that station were in Israeli hands!” (ibid, Sept. 24, 1973).

At the time, he noted, “Meanwhile, King Hussein’s government has offered us the facilities of their Radio Amman. Since the war, they have reduced the power of this station very low. But they offered to increase it back to the full 100,000 watts, on their superpower shortwave station, for the World Tomorrow. So while we await whatever is to happen to Jerusalem Radio, the World Tomorrow is to go out at the same time contracted for Jerusalem Radio, every night, starting July 1. This can be heard here in London, so it can be heard all over Europe and all over the Middle East” (ibid, June 29, 1967).

Following this dramatic chain of events, Mr. Muhtadi traveled to England, and upon arriving at the college in Bricket Wood, offered Mr. Armstrong half the price of the original contract for airtime, but now on Radio Amman. A deal was struck! The pair came to terms and, as such, Mr. Armstrong made a major humanitarian contribution to the Hashemite kingdom, as the funds were used to aid refugees of the Arab-Israeli war.

In 1973, Mr. Armstrong termed these endeavors “our extension program of education worldwide,” in reference to what was to formally become, two years later, the Ambassador International Cultural Foundation.

Despite their meeting being delayed by war, Mr. Armstrong was, in November 1967, already planning on a special gift to give the king at their first meeting, which was originally planned for April 1968. Mr. Armstrong would become world renowned for his unique gifts of Steuben crystal to emperors, kings, queens, prime ministers and presidents.

However, for the second time, the 1968 audience with the monarch had to be rescheduled due to an emergency meeting between Jordan’s king and Egypt’s President Nassar, and the government’s concern for Mr. Armstrong’s safety amid fever-pitch tensions in Amman. Later guerrillas would unsuccessfully attempt to assassinate King Hussein and tensions would continue to abort scheduled meetings.

“After a delay of seven years, King Hussein of Jordan and I enjoyed our first personal meeting. It was—at least so it seemed to me—just as if we had been life-long friends who had not seen each other for seven very, very long years,” wrote Mr. Armstrong to subscribers of the mass-circulation Plain Truth magazine’s October-November 1974 edition. The cover featured a picture of the king, with photos of the historic meeting included in the feature article.

In preparation for the long-awaited meeting, Mr. Armstrong had read the king’s autobiography and felt like he knew the monarch already. So impressed was the head of the Hashemite kingdom that, “When he learned that I am now working on the final four or five chapters of the second (and final) volume of my own autobiography, he asked if he might not have the very first autographed copy” (ibid).

Via these and other miraculous events, doors opened for Mr. Armstrong to preach Jesus’s prophesied gospel of the coming Kingdom of God to Jordan. He would go on to have many meetings with Jordan’s king, queen, princes and princesses, and continue charitable and humanitarian support of royal activities.

During January 1986, when the news of the death of this unofficial ambassador for peace reached King Hussein and Queen Noor, Adnan Abu Odeh wrote, “Their majesties instructed me to convey their heartfelt sympathies and condolences on the passing away of Mr. Herbert W. Armstrong and their hope that the life of benevolence, altruism and the drive for a better understanding among peoples which Mr. Armstrong led will continue to be the inspirational path for others to follow” (Good News, May 1986).

This “inspirational path” has been followed by editor in chief Gerald Flurry, and is actively, via the Armstrong International Cultural Foundation, in its third decade of charitable and humanitarian work. Some of the foundation’s earliest activities were in support of the same handicapped education program Mr. Armstrong charted.

We invite you to follow King Hussein’s example and read online Herbert W. Armstrong’s autobiography (Volume 1 and Volume 2) to learn more of the history of this uniquely successful man and the great God who inspired, guided and opened the miraculous doors for His Matthew 24:14 gospel to be preached as a witness to all nations.