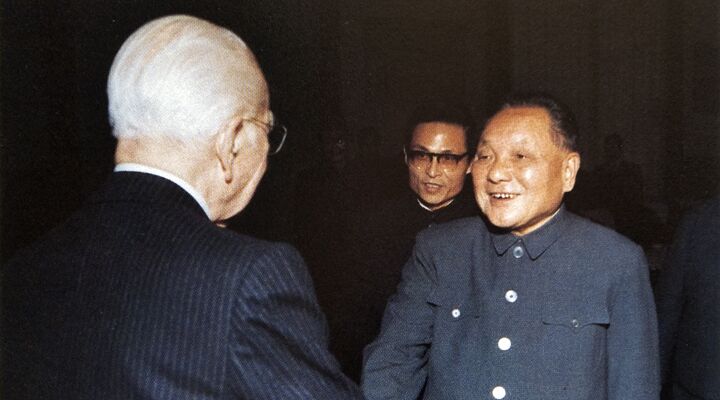 At the White House, First Lady Nancy Reagan thanked Mr. Armstrong for sponsoring the tour of the Little Ambassadors in the U.S. Thereafter, they moved into the famed East Room, which was used for entertainment by presidents Abraham Lincoln and Teddy Roosevelt. White House and Ambassador Foundation officials, along with over 400 guests from the Republican Women’s League, assembled for a special performance by the Little Ambassadors. After the entertainment, the children, first lady and Mr. Armstrong gathered for photographs. As he was departing the East Room, Mr. Armstrong noticed a piano and, to the delight of those present, sat down and performed a few pieces. Afterward, members of the Chinese media interviewed him regarding the Ambassador Foundation’s strong relationship with the Little Ambassadors of Shanghai, who by now were affectionately calling Mr. Armstrong “Grandpa.”

The ambassador, born in Beijing, studied in Germany from 1927 to 1931. He returned home and was active in resistance to Japanese territorial claims. He engaged in further study at Qinghua University and later worked with the Red Cross. In 1944, Zhang began work in the field of foreign affairs, serving in various posts. He was particularly effective in the areas of language translation and border negotiations, notably throughout Asia.

Zhang served as Beijing’s ambassador to Pakistan from 1966 to 1967 and 1969 to 1971. From 1971 to 1973, he assisted in border negotiations with the ussr and normalization of relations with the U.S. From 1973 to 1976, he was ambassador to Canada, which engaged him in travels to Europe, then as deputy foreign minister from 1978 to 1981. Thereafter he served his country as a key representative to the United Nations in areas of economics, diplomacy and space exploration, which took him to Central America, South America and the Mediterranean. In 1983, he began his tenure as ambassador to the U.S.

On his visit to Ambassador College, Zhang was accompanied by his wife, Zhang Yin; Yang Jiechi, his second secretary; and Chinese consul from San Francisco, Tang Shu Bei.

“Conversation touched on China, the United States and the Ambassador Foundation,” reported the Worldwide News. “The guests visited Mr. Armstrong’s study, admiring his autographed portraits from world and civic leaders. They smiled appreciatively at the photograph of Mr. Armstrong and the Little Ambassadors from Shanghai” (Aug. 27, 1984).

After the group had enjoyed an evening meal, the ambassador was heard complimenting the work of the Social Center staff by stating the dinner “was more elegant than a state dinner in the White House” (ibid).

They retired to the living room, where Ambassador Foundation officials answered questions about the activities of the Church and Ambassador College. Before bidding their farewells, the Chinese offered Mr. Armstrong their help in logistical details for his upcoming trip to their capital.

A key high point of Ambassador Foundation relations with China came two months later in the Great Hall at 10 a.m. on Nov. 7, 1984, as Deng Xiaoping greeted the internationally recognized ambassador for world peace. The visit to the world’s most populous nation was supremely historic—it was the first time a leader from Christianity had been invited to speak before leaders of the People’s Republic of China. After group photographs, the two sat together at the rear of the room and, as was Mr. Armstrong’s custom, Mr. Deng was presented with a piece of handcrafted crystal, titled Winter Trees, by the famed American artisans at Steuben.

Sadly, the death of Herbert W. Armstrong in January 1986 stalled the progress of his and Deng Xiaoping’s project set in motion at their meeting two years earlier: construction of the Golden Bridge Exchange Center in Beijing. A year before his death, Mr. Armstrong oversaw planning meetings conducted at Ambassador College with Chinese officials for the building to be modeled on the architecture and engineering of Ambassador Auditorium. The shelving of the project was exacerbated by the cadre that assumed control of the Ambassador International Cultural Foundation. They ultimately destroyed its humanitarian endeavors, lacking both the vision and diplomacy to further the momentum of cultural humanitarianism worldwide as led by the internationally recognized ambassador for world peace.

At the time of Zhang Wenjin’s death in 1991, at the age of 76, he was serving as vice chairman on the Foreign Affairs Committee of the National People’s Congress, China’s legislature, and president of the Chinese People’s Association for Friendship With Foreign Countries.

Six years later, in 1997, Deng Xiaoping died. He and the late ambassador would be pleased that Armstrong Foundation founder and chairman Gerald Flurry followed in Mr. Armstrong’s footsteps and took the time to review the blueprints of Ambassador Auditorium before authorizing construction of its successor, Armstrong Auditorium. Visit the Armstrong Auditorium website for a detailed look at the U.S.’s latest polished jewel, lifting the human spirit. Adorned with Swarovski-trimmed chandeliers, Baccarat crystal candelabra, American cherry wood veneers, Spanish marble and Azerbaijani onyx, the hall’s superb acoustics and soaring Swans in Flight sculpture combine to set Armstrong Auditorium apart as the jewel in the cultural crown of the Midwest United States.

The Armstrong International Cultural Foundation has continued the legacy of the internationally recognized ambassador for world peace and the efforts of the humanitarian Golden Bridge Exchange. This was clearly on display when on February 28 this year, China’s National Symphony Orchestra made its debut performance at Armstrong Auditorium in perpetuation of the spirit of the efforts of its namesake and China’s late leader 19 years ago. With each movement of the orchestral alchemy, the audience responded with avid applause, and as the final dulcet tones rang out, the adoring listeners responded with a standing ovation.