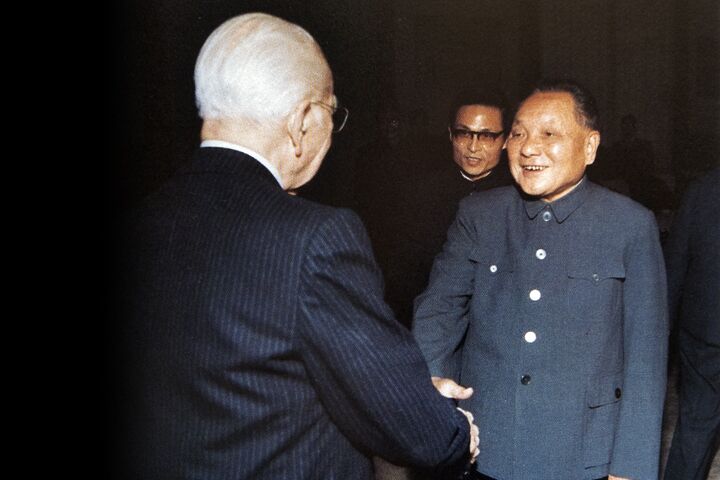 In China’s Great Hall at 10 a.m., Wednesday, Nov. 7, 1984, the world’s most populous nation’s leader, Deng Xiaoping, greeted that venerable “ambassador for world peace without portfolio,” Herbert Armstrong. After group photographs, the two sat together at the rear of the room and, as was Mr. Armstrong’s custom, Mr. Deng was presented with a piece of handcrafted crystal titled Winter Trees by the famed American artisans at Steuben.

In addition, Mr. Armstrong gifted two photo albums to the 80-year-old head of state. The first featured the Little Ambassadors of Shanghai and their recent tour of the United States, which was sponsored by the Ambassador International Cultural Foundation (aicf). The other was a detailed collection of pictures of the Ambassador Auditorium in Pasadena, California, which was constructed 10 years previous, becoming a performing arts jewel and touted as the “Carnegie Hall of the West.”

The Worldwide News of Nov. 26, 1984, reported, “Mr. Armstrong suggested to Mr. Deng that the People’s Republic of China should have a high-quality concert hall and cultural center, which it now lacks.” He then offered to donate Ambassador Auditorium’s architectural blue prints and to aid in securing international finance to help with his proposed humanitarian endeavor.

His bold proposal gained further momentum when he generously “presented a contribution to the Chinese leader to begin the project. Deng Xiaoping praised the Ambassador Foundation for its efforts promoting world peace, and he explained the goals of China to Mr. Armstrong” (ibid). National newspaper and television coverage of the meeting followed, expanding the reach and impact of the visit and Mr. Armstrong’s recommendation and benevolent gifts.

After the successful meeting, the upbeat tone continued right into lunch at Draoyutai, the official Chinese government guesthouse. This was followed by eventful discussions between aicf officials and counterparts from the Soong Ching Ling Foundation (scl) and Chinese Peoples Association for Friendship With Foreign Countries regarding the implementation of the performing arts and cultural center project. Previously, the aicf and Friendship Association had cooperated in bringing the Peking National Acrobats and Little Ambassadors of Shanghai to tour the United States.

As little as five months after scl honorary chairman Deng had accepted Mr. Armstrong’s proposal and donation, the project gained further momentum when a delegation led by the scl and Friendship Foundation arrived at Ambassador College in Pasadena for follow-up talks with Mr. Armstrong and aicf and Ambassador Auditorium officials.

“The center, called the Golden Bridge Exchange Center, will be built in Beijing, China,” reported the April 15, 1985, edition of the Worldwide News. The 10-day talks featured meetings, facility tours and discussions between architectural, mechanical and electrical engineers from the Beijing Architectural Design Institute and Ambassador Auditorium’s house and stage managers, technical support supervisor, plant engineer, interior design and maintenance coordinators, architects from Ambassador College and Daniel, Mann, Johnson and Mendenhall, the auditorium’s design company. On March 18, at his office in the Hall of Administration at Ambassador College, the Chinese delegation met with Mr. Armstrong for progress review and evaluation of construction material samples. They reportedly “told Mr. Armstrong at the end of their visit of the deep and lasting impression they gained from the visit” (ibid).

Sadly, the death of Herbert W. Armstrong in January 1986 and Deng Xiaoping in February 1997 stalled the progress of the project. The shelving of the project was exacerbated by the cadre that assumed control of the Ambassador International Cultural Foundation, ultimately destroying its humanitarian endeavors. These people simply lacked both the vision and diplomacy to further the momentum of humanitarianism worldwide as led by the internationally recognized ambassador for world peace.