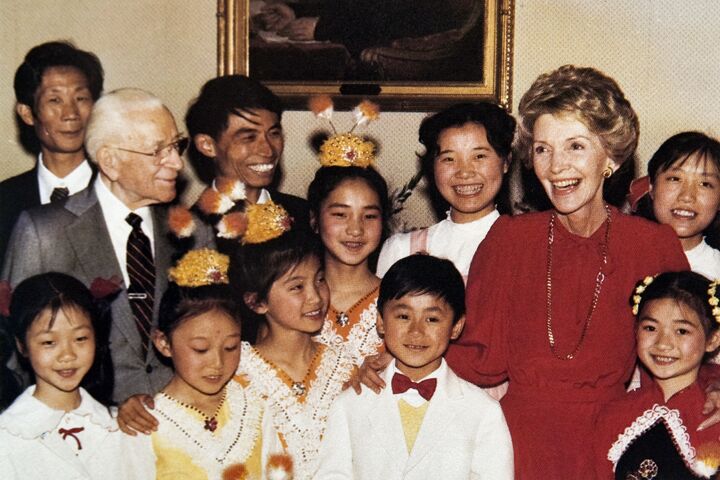 Majestically situated at the summit of a hilltop overlooking surrounding mountains, valleys and the Pacific Ocean, the Ronald Reagan Library and Museum is a spectacular sight to see. Recently, I joined over 5 million other visitors who have passed through its doors since it opened 20 years ago.

The manicured grounds located in Southern California feature a replica of the White House Rose Garden, combining bursts of color with the serenity of water features that relax the visitor and inspire reflective thoughts. This renovated facility boasts state-of-the-art technology integrated with historical artifacts such as sections of the famed Berlin Wall. Over 100,000 square feet of architecturally imposing floorspace showcases 24 unique galleries including a full-size replica of the Oval Office and Air Force One, the Boeing 707 that acted as flying White House for Reagan and the six preceding presidents. The facility regularly hosts special events and speakers; most recently it featured the Republican presidential debate.

Upon leaving, I noticed patrons reflecting in differing ways. Some appeared moved; others, inspired. Most conservative patriots clearly felt melancholy at the current dismal state of the American union.

However, I left on a high! As I walked through the Spanish-style courtyard toward the parking lot, my mind was filled with one specific quotation I did not see on my tour, but which has been oft quoted by this publication. It came in January 1986, when, upon hearing of the death of a great educator and humanitarian, President Reagan wrote, “To the congregation, Worldwide Church of God: Nancy and I join all those mourning the loss of Herbert W. Armstrong. As founder and leader of the Worldwide Church of God, Mr. Armstrong contributed to sharing the Word of the Lord with his community and with people throughout the nation. You can take pride in his legacy. Our prayers are with you. God bless you. Ronald and Nancy Reagan.”

I experienced a wonderful physical and spiritual upbringing in the Worldwide Church of God under the direction of my parents and example of Mr. Armstrong. We took the president’s advice personally to “take pride in his legacy.” The Reagans joined in our mourning of a great man of God; they prayed for us as members of the church, asking for God’s blessing to be upon us.

This was not just a casual letter of presidential condolence. The Reagans enjoyed a humanitarian working partnership and friendship of the human spirit with Mr. Armstrong. They had worked together on a special cultural and humanitarian project with the Chinese government and the famed Shanghai Children’s Palace, founded in 1953 by Song Qingling (Madam Sun Yatsen). A Chinese travel agency, Sinoway, explains, “After the Cultural Revolution, Children’s Palaces for children of working parents were created all over China for after-school care. The Children’s Palaces is one of the most famous and is basically designed for children to study and practice the arts after school. … The building that houses the Children’s Palace in Shanghai was built by a British businessman in the 1930s as his personal residence. Since then it has become [a] meeting place for achieving children. Nancy Reagan and Herbert Armstrong visited here in 1984. From these visits the Little Ambassadors of Shanghai came to the United States and performed in San Francisco, the White House and Ambassador College in Pasadena.”

At the White House, the first lady thanked Mr. Armstrong for sponsoring the tour of the Little Ambassadors in the U.S. Thereafter, they moved into the famed East Room, which was used for entertainment by presidents Abraham Lincoln and Teddy Roosevelt. White House and Ambassador Foundation officials, along with over 400 guests from the Republican Women’s League, assembled for a special performance by the Little Ambassadors. After the entertainment, the children, first lady and Mr. Armstrong gathered together for photographs. As he was departing the East Room, Mr. Armstrong noticed a piano and, to the delight of those present, sat down and performed a few pieces. Afterward, members of the Chinese media interviewed him regarding the Ambassador Foundation’s strong relationship with the Little Ambassadors of Shanghai, who by now were affectionately calling Mr. Armstrong “Grandpa.”

These events came flooding to mind after I experienced the sights and sounds of the Reagan Library and Museum. Featured in one of the galleries was the president’s mother Nelle’s Bible, opened to her favorite verse, 2 Chronicles 7:14, which reads, “If my people, which are called by my name, shall humble themselves, and pray, and seek my face, and turn from their wicked ways; then will I hear from heaven, and will forgive their sin, and will heal their land.” On Jan. 20, 1981, while taking the oath of office, President Reagan laid his hand on his mother’s Bible, which was open at this very verse with her marginal notation of “a most wonderful verse for the healing of the nations.”

Reagan correctly stated as he was leaving office, “America’s best days are yet to come. Our proudest moments are yet to be. Our most glorious achievements are just ahead.” However, those days are not here yet. Today, as the global leader in social, economic, moral and military decline, we are not experiencing “our most glorious achievements.” Capitol Hill rejects the sublime wisdom of a president’s mother and a president’s commitment of oath to lead a nation, which is called by God’s name, to humble itself, pray, seek God, turn from sin and receive the resulting heavenly healing.

The health of Reagan, dubbed the “great communicator,” steadily deteriorated, and by Nov. 5, 1994, he felt compelled to write to the nation about his battle with Alzheimer’s. He concluded his comments by encouraging citizens: “I now begin the journey that will lead me into the sunset of my life. I know that for America there will always be a bright dawn ahead. Thank you, my friends. May God always bless you.”

As the Prophet Isaiah foretold in chapter 3 of his book, our land is bereft of quality masculine leadership today. Conservatives and patriots alike strive in vain to revive the glories of yesteryear.

The clock counts down on the Reagan Foundation’s official website as it prepares for centennial celebrations in President Reagan’s honor from Los Angeles to London.

If Reagan were alive today at the age of 100, he would see a nugget of presidential wisdom that has been heeded and applied in the form of the very message of this online magazine and its sponsor, the Philadelphia Church of God, the successor to the defunct Worldwide Church of God. The wcg fought against this publication and its sponsor for six years in the nation’s courts, in direct opposition to President Reagan’s advice, under the banner of its “Christian duty” to keep the writings, doctrines and humanitarianism of Herbert Armstrong’s legacy out of print and inaccessible to the public. By early 2003, its best efforts had failed and, as many of our readers are aware, we prevailed through God’s guiding victorious hand and marched onward, applying that sage presidential advice to perpetuate the legacy of the life and work of Herbert W. Armstrong. Request our free book Raising the Ruins to understand more about this unprecedented conflict.

A year later, in 2004, Reagan died, and a nation mourned the loss of the only U.S. commander in chief to publicly encourage God’s Church to take pride in the legacy of its founder.

For over 21 years, our editor in chief, Gerald Flurry, has labored to continue the honored legacy of Herbert Armstrong: through the print and online magazine the Trumpet, the Key of David television program, the educational institutions Herbert W. Armstrong College and Imperial Academy, and also culturally through the concert series sponsored by the Armstrong International Cultural Foundation held at the breathtaking new Armstrong Auditorium. These initiatives are increasingly combining to fulfill the president’s advice, “You can take pride in his legacy.” The Philadelphia Church of God does take pride in that legacy and works daily to continue it!