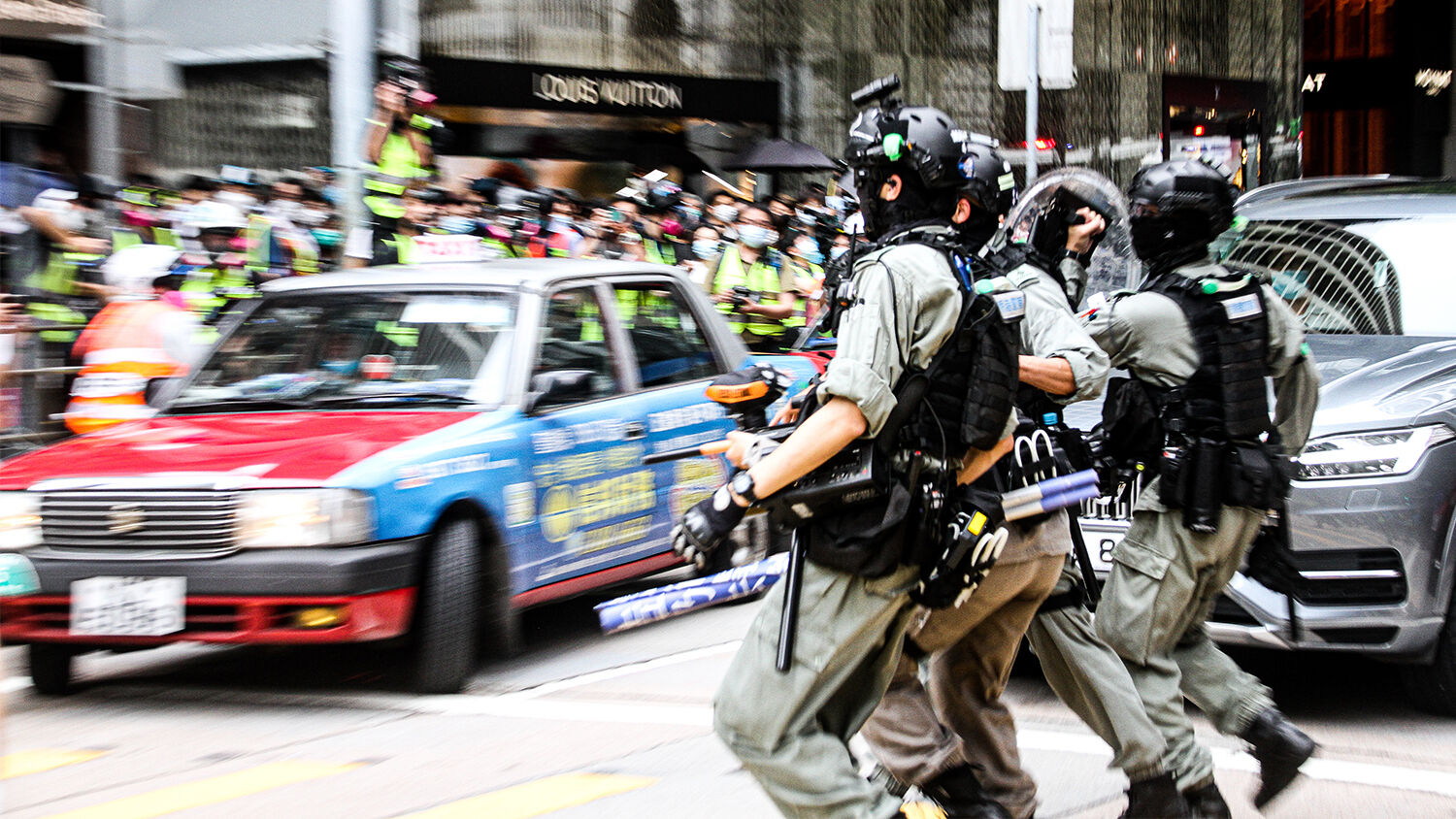 Police rush towards a group of protesters while firing pepper balls during lunchtime street demonstrations in Central Hong Kong’s financial hub on May 27.
Getty Images

‘Everything has been taken under control of the ccp.’

By Jeremiah Jacques • May 28

“They are no longer hiding their evil plans,” a Hong Kong-based analyst told the Trumpet on the condition of anonymity.

Such a law may initially sound reasonable enough. But the Chinese Communist Party (ccp) is famous for defining terms like “splittism,” “subversion” and even “terrorism” with spectacular broadness.

In the mainland, the ccp has long accused individuals it sees as insufficiently submissive to it of being guilty of these transgressions. Even sending a private text message jesting about a party official or criticizing a poorly placed police traffic stop can be enough. And once a person is said to be breaking such a law, the ccp can weaponize China’s draconian judicial system against him. This often means detention without trial and use of torture to extract confessions. Or if such a person does see a courtroom, he has a 99.9 percent chance of being convicted—with executions generally carried out just 72 hours after a verdict is rendered. And China executes more prisoners than the rest of the world combined.

Fear of being subjected to the mainland’s system is what compelled huge numbers of Hong Kongers to take to the streets beginning last June. The ccp had tried to push a law through Hong Kong’s legislature that would let Beijing easily transfer individuals in the territory to the mainland if they were suspected of breaking any Chinese law. So Hong Kong residents went out en masse to demonstrate their opposition to the idea and their desire for autonomy—judicial and otherwise.

This desire was not at all unreasonable: When Britain handed Hong Kong over to China in 1997, the move came with a promise from the ccp that Hong Kong would retain its distinct identity and many freedoms not found in the mainland. Within a framework called “One Country, Two Systems,” the ccp promised that for 50 years, it would let Hong Kong’s government and people have a high degree of economic, political and judicial autonomy. Though they would be one country, Hong Kong would have its own system—separate and far freer than that of China.

In the early years of the agreement, “the Hong Kong people were living a fairly good life,” the analyst told the Trumpet. “Hong Kong was able to retain its capitalist way of life—in contrast to the Communist-socialist or whatever hybrid is in mainland China.”

In the years following the handover, China made several disquieting pushes against Hong Kong’s semi-autonomy, and each prompted a bout of demonstrations in the territory. But Beijing’s intrusion in June 2019 reached a new level of audacity, and Hong Kongers responded with months of impassioned, often violent, mass protests—to the deep humiliation of the Chinese leadership.

The demonstrations persisted up until the start of this year when the coronavirus outbreak kept Hong Kong’s would-be protesters indoors. But the ccp understood that the tensions had not been resolved. And as the outbreak died down, it doubted that Hong Kong’s legislature would pass laws needed to prevent protesters from embarrassing Beijing with a renewed movement.

So, the ccp made the move this week that was truly momentous.

In brazen violation of One Country, Two Systems, it decided to bypass Hong Kong’s legislature and impose its own sweeping anti-sedition legislation on the territory. It is empowering its enforcers to impose the party’s whims in Hong Kong. They will now be able to define terms such as “subversion” as broadly for Hong Kongers as they long have for mainland Chinese. Any Hong Kongers seen as threatening to the ccp—which means any who protest against it—can become subject to the ccp’s fury.

The ccp will be able to set up national security institutions and station secret police in Hong Kong. This will give Beijing much greater control over the territory’s education, media, free speech, courts, free market identity and more.

“The implication behind this is rather huge,” the analyst said. “The passing of this national security law” means the unique freedoms Hong Kong has enjoyed since the territory was handed to China by Great Britain are “officially dead.”

“Everything,” he said, “has been taken under control of the ccp.”

In terms of international relations, this momentous decision was something of a “nuclear option.” It undermines the principle of Hong Kong’s self-governance, and shows that Chinese leader Xi Jinping is willing to sacrifice the special status many countries of the world have given to Hong Kong since 1997, in order to quash a perceived threat to his power.

Hong Kong will be a dramatically less attractive location for global companies to do business, and to interface with mainland China through. The move already prompted an announcement from United States Secretary of State Mike Pompeo that Hong Kong no longer has enough autonomy to justify continued preferential handling on trade and immigration under U.S. law. This could be a major blow to the financial benefits the ccp reaps through Hong Kong.

But none of that matters as much to Xi as protecting his and the ccp’s power. The move shows that Xi and the ccp are no longer concerned with what the nations think of their increasingly dictatorial leadership. As the analyst said, “They are no longer hiding their evil plans.”

For decades, the power of Britain and America stabilized much of the world and advanced civilization for many peoples and nations around the globe. This fact was perhaps more evident in Hong Kong—where the British transformed an essentially barren island into a beacon of prosperity and freedom—than anywhere. But the temperate Anglo-American epoch is now coming to an end, and clouds are gathering for a new era.

Luke 21:24 records Jesus Christ prophesying of this imminent time of global turmoil, which He called “the times of the Gentiles.”

In the February 2020 Trumpet, editor in chief Gerald Flurry wrote about the modern world edging into this dark time. He wrote: “These ‘times of the Gentiles’ are yet to be fully realized. However, we are in the outer edges of this catastrophic storm.”

Mr. Flurry explained that the term Gentile refers to “non-Israelite peoples.” The term Israel primarily indicates modern-day America and Britain, which is made clear in our free book The United States and Britain in Prophecy, by Herbert W. Armstrong.

Mr. Flurry continued: “Once you understand who Israel is, then you can see how the Gentiles—the non-Israelite peoples—have started to take charge of the world already. [W]hen this prophecy is completely fulfilled there will be two major powers.”

From there, he shows that one of these two will be led by Germany, and the other by Russia and China.

In Hong Kong, the consequences of the changeover from Israelite rule to Gentile rule are on dazzling display—in microcosm. No one claims that British imperialism was unflawed; it was administered by people, and all people rule deficiently. But Hong Kongers today cherish their colonial legacy and the freedoms and rule of law that they inherited from Britain. This is clear in the way so many protesters brandish the Union Jack as they decry the ccp’s assault on those freedoms. But Beijing is unyielding and is now sending a message that rule by fear is about to replace all that Hong Kong once had.

Hong Kong is a bellwether for what Mr. Flurry called the approaching “catastrophic storm.” And as the ccp asserts more control over the territory, it shows how dark and violent the squall will be.

In His forecast about the stormy days that are coming, Christ said “men’s hearts” will be “failing them for fear” (Luke 21:26). Yet in the very next verse, He assures us that the tempest will dissipate and give way to a spectacular radiance.

To understand more about the times of the Gentiles and the momentous event that will immediately follow them, read Mr. Flurry’s article “The Climax of Man’s Rule Over Man.”