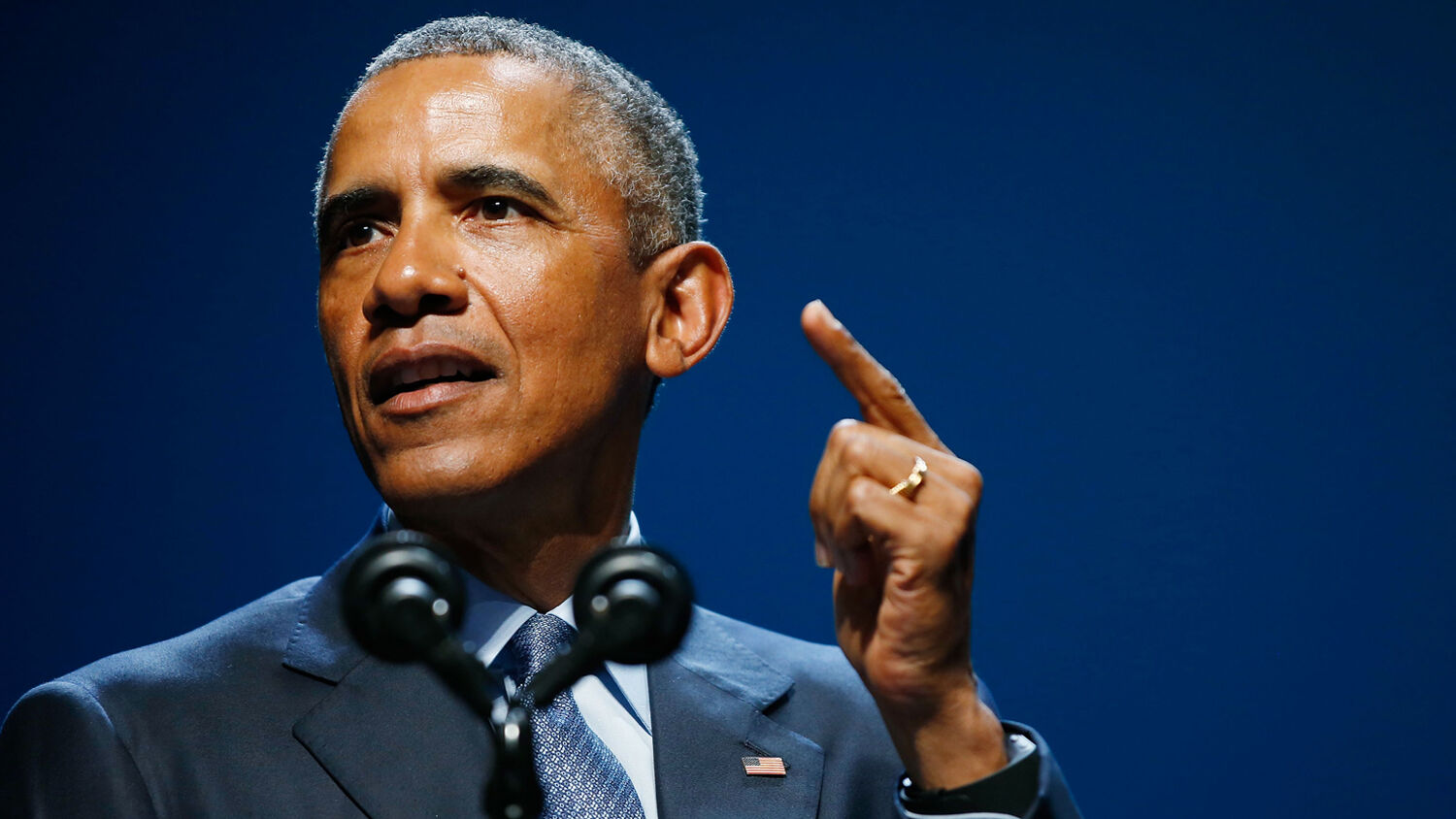 Anyone can see that America is bitterly divided today, and much of this division was caused by a former U.S. president still operating behind the scenes.

Nearly a dozen states want to ban the teaching of a Marxist ideology that says America is systemically racist, and valuing things like “the nuclear family,” “self-reliance” and “rational linear thinking” are manifestations of “white culture.” Most Americans think this is a good thing, but Barack Obama is angry about this mounting opposition to critical race theory.

In an interview with cnn’s Anderson Cooper on June 7, the former United States president scoffed at the suggestion that critical race theory is a threat to our republic. “I also think that there are certain right-wing media venues, for example, that monetize and capitalize on stoking the fear and resentment of the white population that is witnessing a changing America and seeing demographic changes; and do everything they can to give people a sense that their way of life is threatened and that people are trying to take advantage of them,” he said. “[Y]ou would think with all the public policy debates that are taking place right now, the Republican Party would be engaged in a significant debate about how are we going to deal with the economy, what are we going to do about climate change, what are we going to do about—lo and behold, the biggest single most important issue to them apparently right now is critical race theory. Who knew that was the threat to our republic?”

Yet anyone who researches critical race theory will find that it definitely is a threat to the republic.

In 1989, Kimberlé Crenshaw organized a retreat that created a new kind of communism where race conflict replaced class conflict in the quest to overthrow capitalism and replace it with socialism. In his essay “Critical Race Theory: What It Is and How to Fight It,” Battlefront founder and director Christopher Rufo wrote, “Critical race theory is an academic discipline, formulated in the 1990s, built on the intellectual framework of identity-based Marxism. Relegated for many years to universities and obscure academic journals, over the past decade it has increasingly become the default ideology in our public institutions. It has been injected into government agencies, public school systems, teacher training programs, and corporate human resources departments in the form of diversity training programs, human resources modules, public policy frameworks, and school curricula.”

This ideology that Barack Obama is defending would overturn the principles of the Declaration of Independence and destroy the remaining structure of the Constitution by abolishing property rights and empowering the federal bureaucracy to redistribute wealth to ethnic minorities regardless of whether they earned it. Such an omnipotent bureaucracy would destroy America’s constitutional republic and replace it with an authoritarian technocracy or dictatorship. And this is not the first time Obama has suggested that America needs to get away from its Constitution.

Before he was elected president, Obama made some shocking comments about the Constitution during a 2001 Chicago Public Radio interview. He lamented that the 1953–1969 Supreme Court led by Chief Justice Earl Warren, which exceeded its lawful powers, was not progressive enough. “To that extent, as radical as I think people tried to characterize the Warren court, it wasn’t that radical,” he said. “It didn’t break free from the essential constraints that were placed by the Founding Fathers in the Constitution.” He then noted that America was suffering from the fact that civil rights leaders were unable to put together a strong enough coalition to break free of those constraints and “bring about redistributive change.” He also lamented that the Constitution was “a charter of negative liberties” that says “what the federal government can’t do to you” but doesn’t say what the government “must do on your behalf.”

Trumpet editor in chief Gerald Flurry discussed Obama’s 2001 interview in his article “The Radical Left and the American Constitution,” writing:

When [Obama] says [the Constitution] should have stated what the government must do on the people’s behalf, he is talking about federal social programs. As he said in the same radio interview, this means taking wealth from some citizens and redistributing it to others in the form of health care, welfare, and other social benefits. A lot of that thinking was what destroyed the home mortgage firms Fannie Mae and Freddie Mac. That crisis is at the heart of America’s financial meltdown. Still, the radical left thinks they know exactly what should be done on behalf of the people. … The Founding Fathers created the Constitution to limit the government’s power because they had lived under a tyrant who decided, according to his own whims, what was fair for the people and what wasn’t. The Constitution gave them a certain protection from evil human nature. The founders based this charter on certain biblical principles, not just human reasoning. What happens if you don’t have a Constitution to hold back the liberal left?

Critical race theory is an attempt by the radical left to do what the Warren court failed to do: “break free from the essential constraints that were placed by the Founding Fathers in the Constitution.” Barack Obama has long supported this effort, and that is why he is now accusing anyone brave enough to speak out against communism of “stoking the fear and resentment of white population.” He is using accusations of racism as a tool to drive revolutionary change.

Yet this should not come as a surprise. According to Dr. John C. Drew, a political scientist who knew Obama when he was a student at Occidental College, the former president was a self-avowed Marxist in his youth. In a radio interview with Dr. Paul Kengor on the Glen Meakem Program, Drew explained that his girlfriend introduced the 19-year-old Barack Obama to him as a fellow Communist in 1980. By this time, Drew had abandoned the violent style of Marxist-Leninism in favor of a more gradualist approach. So he was surprised that young Obama was predicting a people’s revolution.

Because Obama was so adept at pretending he is someone he really is not, Mr. Flurry identified him as a type of the ancient Seleucid King Antiochus Epiphanes in his booklet America Under Attack. Antiochus obtained rule through deceitful lies before he betrayed the people of the ancient nation of Judah, slaughtering them and desecrating the temple in Jerusalem with an idol bearing his likeness. Obama obtained power through deceit before becoming the most biblically hostile president in U.S. history. The activist judges and “deep state” bureaucrats that he appointed are still attacking the nation’s Judeo-Christian moral codes and constitutional form of government.

Anyone can see that America is bitterly divided today, and much of this division was caused by Barack Obama.

You cannot understand what is happening in America until you realize the spiritual dimension behind it. “An invisible evil power is destroying this nation with great speed and fury!” Mr. Flurry wrote in the October 2017 Trumpet issue. “Satan manipulates human moods, attitudes, feelings, and emotions (Ephesians 2:2). He can easily stir up people to try to kill each other in violent riots.”

In Ezekiel 5:12, God reveals that one third of the population of the United States and Britain will die from the pestilence, famine and violence that will result from civil war. This sobering prophecy means that more than 100 million people will die in rioting and warfare in the United States. (Request our free book Ezekiel—The End-Time Prophet for proof.)

God allows America to experience such violence to teach it the consequences of broken law. Yet the good news is that the coming violence in America will lead people to come to know God (Ezekiel 12:17-20). God offers protection from the coming civil war (Revelation 12:14), but only to those who turn from their evil ways (Ezekiel 33:10-11).

To learn more about Ezekiel’s prophecy of civil war, and to learn how God will restore America to greatness after its people repent, please request a free copy of Great Again, by Gerald Flurry.