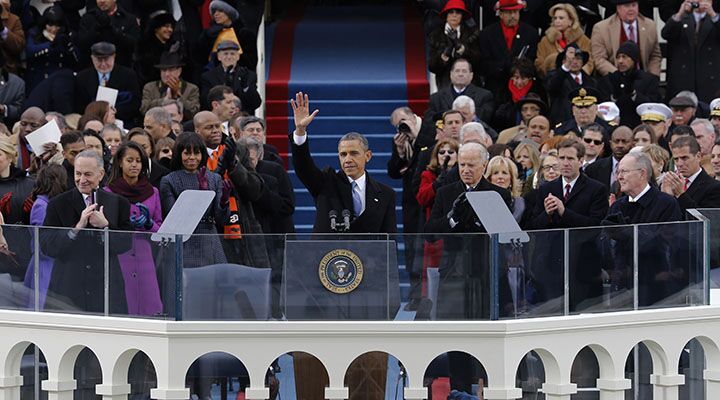 When I saw the results of America’s presidential election, it left me in profound sadness. Not because of any one man, but because it showed what a radical turn this nation has taken. It showed just how much the extreme radicals have gotten control.

You’re going to soon see that this is a very different America than it was before the election.

All the signs show that it really didn’t matter who won—America is losing its power quickly, and no one man could turn that around. The economy is in a disastrous condition. This will combine with the nation’s moral decline and loss of national will to devastate us.

But now, those problems will be made worse by the stranglehold of far-left liberals on the highest echelon of the government. Let me give you an example of what I mean.

In a 2001 radio interview, Barack Obama revealed some of his shocking ideas about how the government should run.

Here is what he said about the 1953-1969 Supreme Court led by Chief Justice Earl Warren, which was a very activist court: “To that extent, as radical as I think people tried to characterize the Warren court, it wasn’t that radical.” Notice this! “It didn’t break free from the essential constraints that were placed by the Founding Fathers in the Constitution” (emphasis mine throughout).

Mr. Obama was talking about how the constraints on the Constitution need to be removed. He was revealing where he believes the Founding Fathers erred in writing the defining legal charter of the United States!

This is a man who has been in the Senate for only three years—and spent half of that time running for president—who believes he knows where the Founding Fathers were wrong.

That is true, and it is a major reason the Constitution was so successful in establishing this nation. The Ten Commandments are the same way. They are mostly “thou shalt nots,” explaining those things God commands you not to do. That gives a law-abiding people a tremendous amount of freedom! Not only are you free from those sins that lead to spiritual and physical slavery, but also, everything else that does not violate that law is good in God’s sight.

Mr. Obama’s statement was not alarming to most Americans because the Ten Commandments mean so little to them today!

Essayist Bill Whittle wrote this in response to Mr. Obama’s interview: “The entire purpose of the Constitution was to limit government. That limitation of powers is what has unlocked in America the vast human potential available in any population. Barack Obama sees the limiting of government not as a linchpin, but rather as a fatal flaw …” (National Review Online, Oct. 27, 2008).

This is Mr. Obama’s view of the Constitution. When he says it should have stated what the government must do on the people’s behalf, he is talking about federal social programs. As he said in the same radio interview, this means taking wealth from some citizens and redistributing it to others in the form of health care, welfare and other social benefits.

A lot of that thinking was what destroyed the home mortgage firms Fannie Mae and Freddie Mac. That crisis is at the heart of America’s financial meltdown.

Still, the radical left think they know exactly what should be done on behalf of the people.

The Founding Fathers created the Constitution to limit the government’s power because they had lived under a tyrant who decided, according to his own whims, what was fair for the people and what wasn’t. The Constitution gave them a certain protection from evil human nature. The founders based this charter on certain biblical principles, not just human reasoning.

What happens if you don’t have a Constitution to hold back the liberal left? You end up with a welfare state and a loss of many freedoms!

I believe Mr. Obama sincerely thinks his ideas will solve America’s problems, and I’m not saying he is malicious.

The mainstream press, which is supposed to be unbiased and is supposed to be our watchman, has also become radicalized. Many of its journalists and commentators will not even consider an opposing view. They go to great lengths to bury the serious flaws of their own candidates, and at the same time they work actively to propagate every negative piece of information they can find to attack any opposing viewpoint.

Liberals want to revive the Fairness Doctrine, which states that the media must present both sides on each issue. But are they doing this because they want to correct the radical, one-sided bias of most of the mainstream press? No—what they really want to do is shut down dissent. Conservative commentators, particularly radio talk-show hosts, are concerned that the radical left will use its new power to silence their views.

You see the same radicalization in our educational institutions. There is generally only one side taught in most of our colleges and universities.

Who would have thought, even a few years ago, that we would choose such radical people to rule us? This is only the vanguard of our people’s moral and spiritual decline. The radical left is leading the way.

What a huge shift! What happens to make people so drastically different from how they were just 10 years ago? Why is America acting like it is in a trance while this radicalization takes place? Because the nation is rapidly degenerating before our eyes.

The Point of No Return

At a campaign appearance in Denver, Mr. Obama had a hundred thousand people show up. Why are these gigantic crowds so enthusiastic about him? What is really going on here?

It has a lot to do with human emotion, wild imagination—and desperation. The answer is that people are in distress. They are troubled. They see grave problems facing our nation. And they are looking desperately for solutions—for a savior. But people never look in the right place.

There is something unseen moving these events, influencing these people. It explains why people are acting as they are. The Bible shows us what that unseen factor is.

Thomas Sowell, a black conservative, said during a television interview just before the election, “Sometimes people will say, ‘It is just as well to let those guys get in there and discredit themselves, then we’ll win in the backlash.’ People said that when Hitler was rising in Germany. And many of those people that said that died in concentration camps. … There is such a thing as the point of no return.”

In my article in our September issue, I used the same phrase. America has passed the point of no return.

We are experiencing the end-time prophetic fulfillment of a statement God made about Judah anciently: “But they mocked the messengers of God, and despised his words, and misused his prophets, until the wrath of the Lord arose against his people, till there was no remedy” (2 Chronicles 36:16). In other words, they had passed the point of no return.

Can we see what this watershed election means for the future of this nation?

Yes, America is deeply flawed. But no matter what you think of this nation, it has kept a lot of tyrants off people’s backs, and it did begin with a wonderful, noble idea linked to God and the Bible.

But the Bible says its time is over. We are entering a period called “the times of the Gentiles” (Luke 21:24).

We have been anticipating this development for a long time. Herbert W. Armstrong foretold of the time we are in now for some 50 years. This is about to affect you, whether you realize it or not.

Verse 12 of 2 Chronicles 36 says Jeremiah delivered words out of God’s own mouth, and that God expected King Zedekiah and the people to humble themselves before His prophet.

Jeremiah is an end-time book. Is there a work that is literally speaking from the mouth of God today? There is, and that ought to be sobering to all of us!

God expects us to discern when the words are coming from the Spirit of God. But America, Britain and the Jews as nations have refused to do that. Just as people don’t believe in Satan’s flaming wrath, you don’t see much interest in God today. They have refused to repent—liberals and conservatives—and have forgotten their past history with God. They have passed the point of no return. They have gotten so far from God that they can no longer be reached by words. As a result, they are going to be victims of Satan’s raging wrath!

Those are the wordsfrom God’s mouth, and somebody has to stand up and proclaim them! Like Jeremiah, someone must speak from the mouth of God! That is sobering, but also should fill us with joy!

Amid all this bad news, we must not fail to see the good news. The good news is that these dramatic events are a sign! Christ said it would be exactly this way just before He returned. He is coming!

Lamentations 2:8 shows God is stretching out a line and measuring the destruction of biblical Israel for its rejecting Him. For a short span of time, this is bad news. But it is leading to the return of Jesus Christ to save mankind from extinction and a time when man will finally learn his own futility and then turn to God!

We have gotten to the point now that if Christ didn’t intervene, no flesh would be left alive on this Earth (Matthew 24:22). This is what man has achieved. People want to look to men to save them, to be their messiah. And look at man’s crowning achievement: the potential to obliterate all mankind off the planet! Christ prophesied about that explicitly, but even professing Christians of this world don’t talk about what He said! They only talk about the person of Christ.

It is true that you don’t see much joy on the Earth today. Mankind is turning to the most radical and risky of governments for change and hope. That will result in the worst kind of change imaginable—but it will also lead to the return of our true Savior, Jesus Christ. Then, God says, He is going to fill this Earth with His government, and with real joy and real hope!