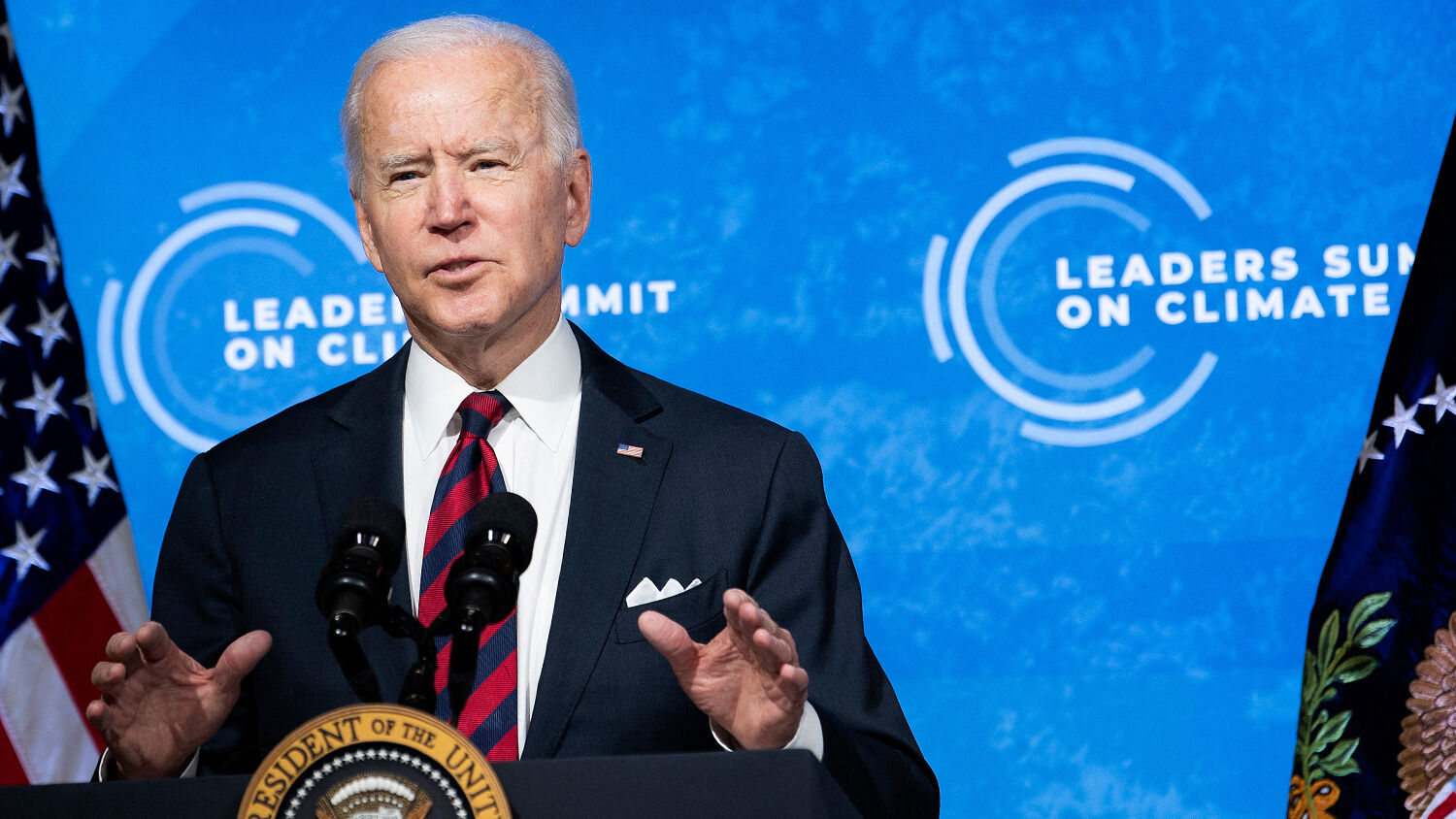 If the Biden-Harris administration wanted to be a good steward of the planet, it would stop micromanaging carbon emissions and start conserving America’s soil.

Last week, people around the world celebrated Earth Day—or, as the United Nations has rebranded it, International Mother Earth Day. Leaders around the world used the occasion to implore people to make “peace with nature” and “do everything in your power to tackle climate change.” By “tackle climate change,” they meant “reduce greenhouse gas emissions.”

That goal is nearly double the emissions reduction target set by the Obama-Biden administration. It is also well beyond what America can realistically achieve without either offshoring a huge chunk of its greenhouse gas-emitting industries to nations that do not care how much carbon they emit (like China) or massively expanding America’s nuclear energy industry. And since most liberals hate nuclear energy, it’s safe to assume they will choose the former option. (Solar and wind power are too variable to serve as “base load” power generation as last summer’s rolling blackouts in California attest.)

Biden was vague about how his administration plans to accomplish slashing greenhouse gas emissions so dramatically, but his national climate adviser, Gina McCarthy, told npr that Biden’s $2 trillion infrastructure plan would help the U.S. achieve these reduction targets.

“We are talking about an opportunity to advance our transportation sector by investing in electric vehicles and battery manufacturing here in the United States, both for vehicles, but also for battery storage opportunities,” said McCarthy. “We’re talking about building a new resilient grid.”

But recharging the batteries of electric vehicles produces almost as much carbon dioxide as driving a gasoline-powered vehicle if the electric grid is powered by fossil fuels. In fact, a study by the ifo think tank in Munich found that electric vehicles in Germany emit 11 to 28 percent more carbon dioxide than their diesel counterparts when you consider the carbon dioxide emissions linked to the production of their batteries. So, Biden’s infrastructure plan is more of an excuse to buy rare earth minerals from China than it is a legitimate plan to reduce global greenhouse gas emissions.

Donald Trump noted on March 31 that Biden’s $2 trillion infrastructure plan is built on ludicrous tax hikes designed to send U.S. manufacturing jobs to China. “Joe Biden’s radical plan to implement the largest tax hike in American history is a massive giveaway to China, and many other countries, that will send thousands of factories, millions of jobs, and trillions of dollars to these competitive nations,” he said. “The Biden plan will crush American workers and decimate U.S. manufacturing, while giving special tax privileges to outsourcers, foreign and giant multinational corporations.”

When you look at who is behind the Biden-Harris climate change agenda, you realize the real issue is government control. America’s political and corporate elite see China’s massive workforce as the linchpin of a new economic order, and they are willing to tell people almost anything to convince them America needs to offshore its manufacturing base to Asian nations.

In “What the Paris Climate Agreement Was Really About,” Trumpet editor in chief Gerald Flurry noted, “Climate change has become something like a religion for the radical left. They believe it as an article of faith regardless of the evidence. It is a tool they are using to increase their control.”

Scientific fraud abounds when it comes to proving man-made climate change, because the government officials financing climate change research are more interested in power than in science (please read our article “Greenhouse Apocalypse” for a more detailed analysis of this subject). If the Biden-Harris administration really wanted to be good stewards of the planet, it would forget about micromanaging emissions of carbon dioxide (which is a necessary ingredient for life) and start conserving America’s top soil.

Soil degradation may be the greatest environmental threat facing humanity. Satellite imaging reveals that America’s corn belt has lost about a third of its topsoil due to industrial farming techniques. Yet America continues to plant 36 million acres of corn earmarked for ethanol production. This ethanol is mixed with gasoline to reduce the amount of carbon dioxide emitted into the atmosphere by vehicles. So you could say that America is deliberately sacrificing its soil on an altar of faux-environmentalism.

The ironic thing is that ecologist Allan Savory has demonstrated that proper grassland management based on holistic grazing has the potential to reduce atmospheric carbon to pre-industrial levels by increasing plant growth in the world’s deserts. So the liberals are wrong about cow flatulence being a threat to the planet. Proper grassland management would enrich the world’s soil to such an extent that the resulting plant growth would sequester more carbon than humans have emitted since 1850.

This is a game-changing discovery, but it should not come as a shock to those familiar with biblical agriculture laws. The Bible does not have much to say about fossil fuels, but it has a lot to say about soil management. One Old Testament law that critics mock is the land sabbath.

God tells people to let their land rest from crop production every seven years. “Speak unto the children of Israel, and say unto them, When ye come into the land which I give you, then shall the land keep a sabbath unto the Lord. Six years thou shalt sow thy field, and six years thou shalt prune thy vineyard, and gather in the fruit thereof; But in the seventh year shall be a sabbath of rest unto the land, a sabbath for the Lord: thou shalt neither sow thy field, nor prune thy vineyard” (Leviticus 25:2-4).

During the land sabbath, no crops can be sown or sold. Nothing can be harvested except what people pick from their personal gardens for their own consumption. Grain stored during the previous six years can be sold, but the land sabbath discriminates against landowners who rely solely on crops for income. This is a major reason God instituted this law. Growing crops is good—but if not controlled, it becomes a lethal weapon against the soil (as satellite imagery of America’s corn belt attests).

“[T]he land sabbath uses the sheer power of economics to encourage farmers to adopt a diversified program; based on livestock and the production of meat, milk, eggs, wool, etc,” reported the December 1971 issue of the Your Living Environment series, produced by the agriculture department of Ambassador College in Bricket Wood, England. “It encourages grassland farming (the feeding and fattening of livestock on grass), rather than excessive dependence on cereal grains as animal feed. It discourages an excessive dependence on crops that require annual sowing and harvesting. And it encourages small vegetable gardens, diversified and intensively managed. Interestingly enough, by encouraging just such a program, God induces farmers to adopt the ideal fertility-building methods.”

Instead of robbing the soil of nutrients until the land turns to desert, God’s agricultural laws ensure that the soil is rejuvenated at least once every seven years by the microbe-rich manure of grazing herds. There is a reason God promised the Israelites a land flowing with milk and honey. Where there is milk, there are cattle. Where there is honey, there are bees. Both cattle and bees are keystone species to a healthy grassland ecosystem with carbon-rich soil and vibrant plant life.

God molded the first human out of humus and gave his family stewardship over the planet. He provided humans with instructions on how to sustain their environment, including these two overarching principles: “And the Lord God took the man, and put him into the garden of Eden to dress it and to keep it” (Genesis 2:15). Yet humans have selfishly depleted the soil and failed to take care of the planet.

The Bible tells us a time is coming when “the desert shall rejoice, and blossom as the rose” (Isaiah 35:1). In fact, carbon dioxide emissions have already made the world a greener place by fertilizing plant growth in deserts and in the high arctic. But this prophecy will not ultimately be fulfilled until people learn to stop robbing the soil (even in the name of faux-environmentalism) and start obeying God’s agricultural laws so a healthy and vibrant ecosystem can be sustained indefinitely!

For information on the importance of soil management, please read our article “Yesterday’s Farm, Today’s Desert.” It was edited by chief curator Jody Butterfield at the Savory Institute to ensure its accuracy.