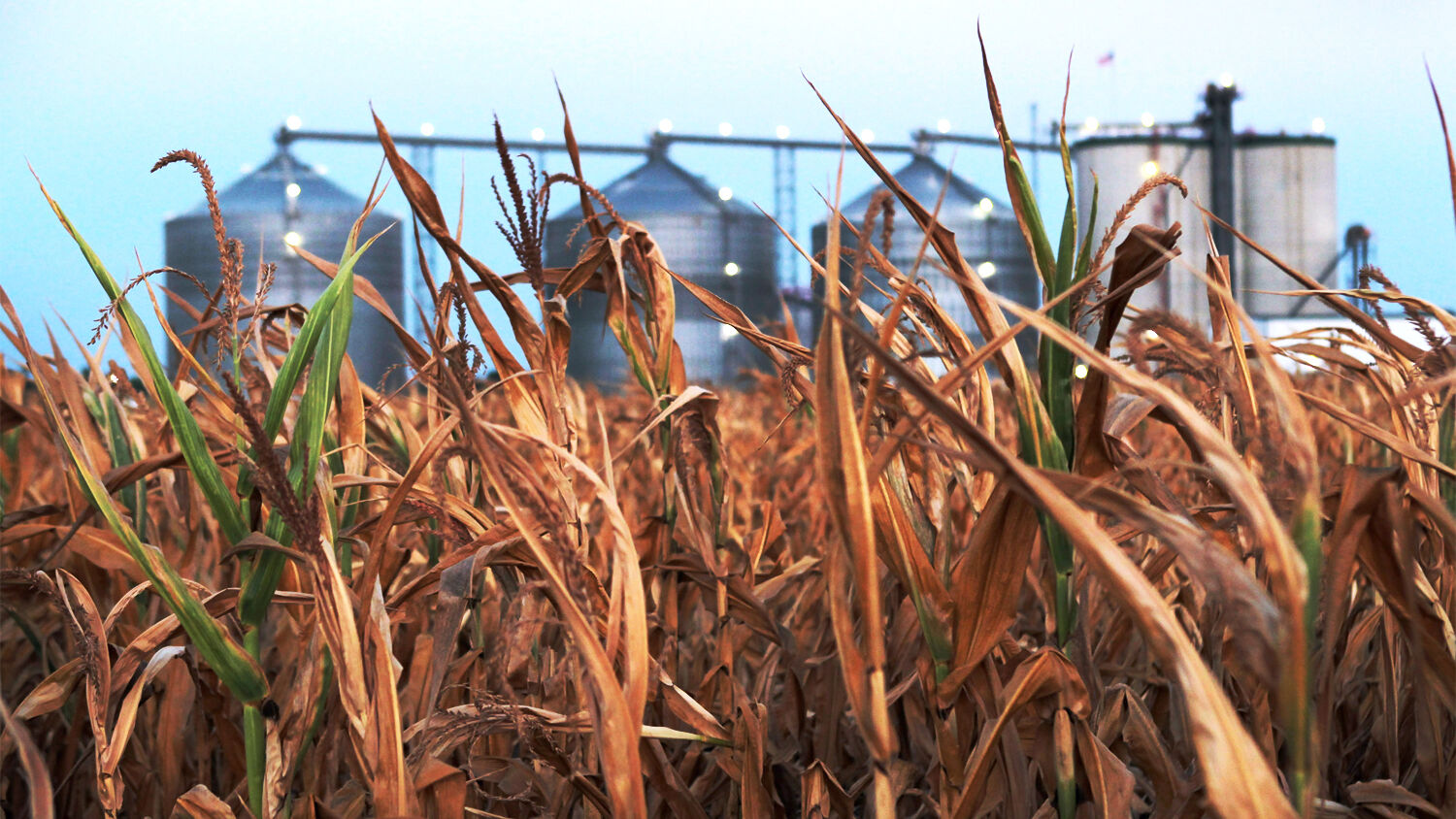 A field of corn in Illinois
Scott Olson/Getty Images

Farmers are acting like they can keep robbing the soil indefinitely.

Soil degradation may be the greatest environmental threat facing humanity. The physical processes that generate high-quality topsoil can take centuries, and a third of the world’s topsoil has already eroded away. According to Maria-Helena Semedo of the Food and Agriculture Organization of the United Nations, all the world’s topsoil could be gone within 60 years if current rates of soil degradation continue unabated. That would be a world-ending disaster.

More than a third of the farmland in America’s corn belt has lost the carbon content in its topsoil, according to a study published on February 23 in the journal Proceedings of the National Academy of Sciences. Nearly 30 million acres are now vulnerable to erosion, as the carbon content is too low to support life when farmers are not knifing synthetic fertilizers into the ground.

University of Massachusetts–Amherst graduate student Evan Thaler, along with professors Isaac Larsen and Qian Yu, used satellite images to map areas of the Midwest that had no remaining organic matter in the topsoil layer. Thaler and his colleges then estimated that topsoil loss has reduced corn and soybean yields in the corn belt by 6 percent, resulting in losses of nearly $3 billion a year for American farmers. This loss of topsoil has also increased nutrient runoff into nearby waterways, worsening water quality.

A “dead zone” exists in the Gulf of Mexico where fertilizer that has washed down the Mississippi River and out to sea fuels an algae bloom that consumes the oxygen that fish and other aquatic animals need to survive. So the same agricultural practices that are destroying soils are destroying fisheries.

Soil degradation also poses a threat to American food security. The United States imports nitrogen fertilizer from nations like Canada, Russia, Trinidad and Tobago, and Ukraine. It is reliant on these nations to keep its fields producing, so a trade war could have devastating effects on U.S. agriculture.

Before World War ii, American farmers used very little synthetic fertilizer. They could not plant crops like corn—which robs soil of its organic content—year after year. They had to graze cattle on the land some years, and plant nitrogen-fixing plants like clover other years. This crop rotation returned organic matter to the ground, making agriculture sustainable. But ever since two German scientists devised a way to transform nitrogen in the air into fertilizer, farmers have been robbing the soil of its organic content and acting like they can keep using synthetic fertilizers indefinitely.

In reality, synthetic fertilizers only temporarily increase crop yields (while simultaneously hurting the health of people who eat crops grown with their aid). Once the fertilizer runs out, vast stretches of the U.S. will be about as fertile as the Sahara Desert—and unable to support the needs of the nation.

Yet as frightful as such a scenario sounds, the Bible does prophesy of devastating crop failures in America’s near future. The Prophet Joel paints a frightful, desolate picture of starvation and disease.

When you understand that modern-day America is largely composed of descendants from the ancient Israelites, it becomes obvious that this end-time prophecy is about corn, wheat and barley grown in the Midwest perishing. It is about grapes, figs and pomegranates grown on the West Coast drying up. And it is about apples grown in Washington and Michigan withering.

Joel continues: “How do the beasts groan! the herds of cattle are perplexed, because they have no pasture; yea, the flocks of sheep are made desolate. O Lord, to thee will I cry: for the fire hath devoured the pastures of the wilderness, and the flame hath burned all the trees of the field. The beasts of the field cry also unto thee: for the rivers of waters are dried up, and the fire hath devoured the pastures of the wilderness” (verses 18-20). Farm animals will starve as drought drys up their pastures and wildfires burn away their forage. The cattle will be perplexed, but such disasters are sent by God to destroy America’s food supply even as foreign nations refuse to sell produce to the United States.

America’s current agricultural crisis is setting the stage for these sobering prophecies to be fulfilled.

God promises to send these curses because the American people have changed His judgments into wickedness more than other nations and sinned against Him more than the countries that are around them (Ezekiel 5:6). But God also reveals how individuals can be protected from this disaster.

Ezekiel 33:10-11 state, “Therefore, O thou son of man, speak unto the house of Israel; Thus ye speak, saying, If our transgressions and our sins be upon us, and we pine away in them, how should we then live? Say unto them, As I live, saith the Lord God, I have no pleasure in the death of the wicked; but that the wicked turn from his way and live: turn ye, turn ye from your evil ways; for why will ye die, O house of Israel?”

God takes no pleasure in the death of the wicked. “Why will ye die, O house of Israel?” What a terrifying question! It is a matter of life-and-death importance to pay attention to the seriousness of the times!

For more information on the biblical solution to America’s agricultural crisis, please read “Yesterday’s Farm, Today’s Desert.” It explains how mankind can stop robbing the soil, and instead start regularly rejuvenating the soil so that a healthy and proactive ecosystem can be sustained indefinitely!