It was deeply significant—but not for the reasons people think. 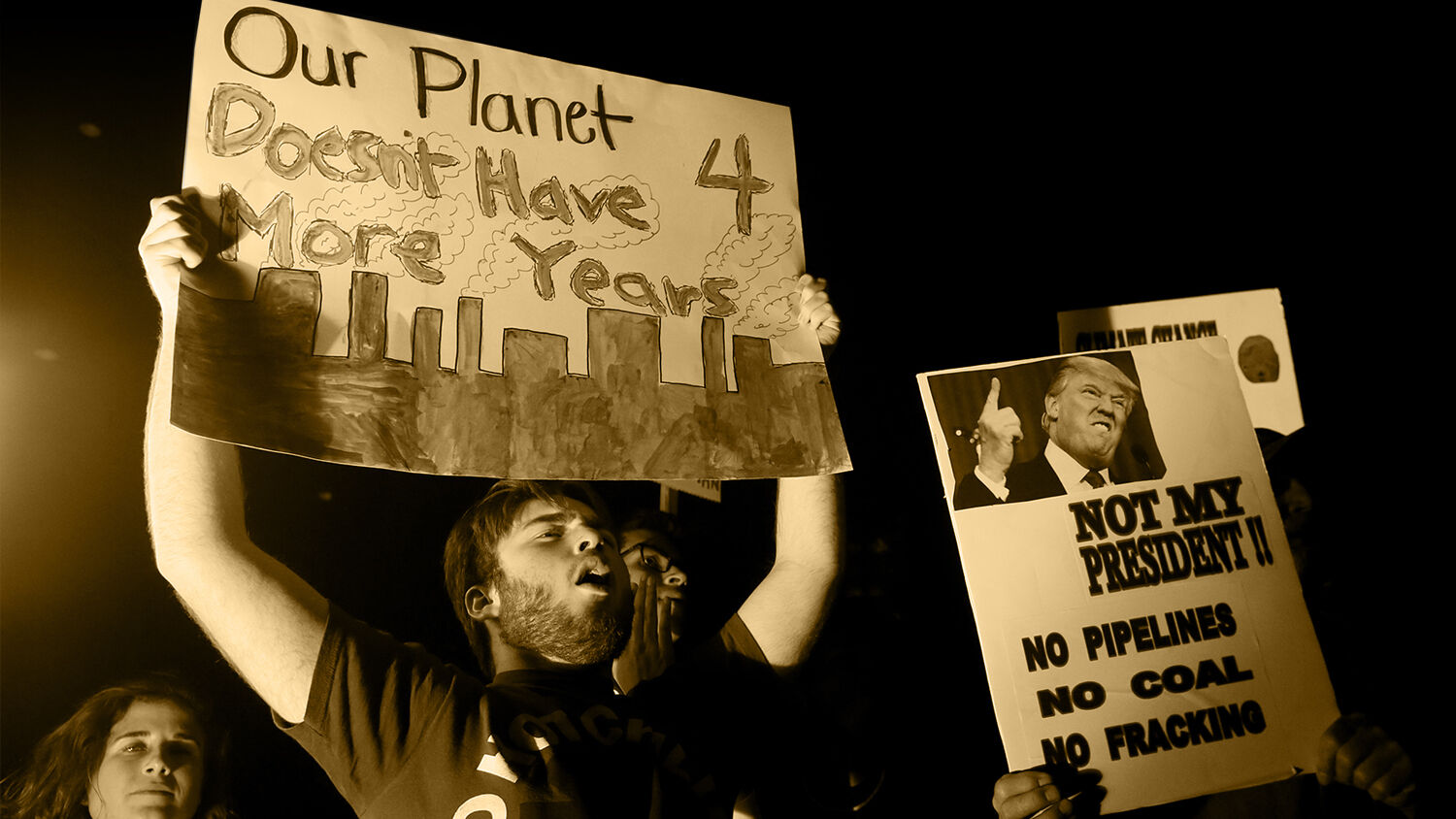 President Trump’s decision to pull the U.S. out of the Paris climate accord provoked severe liberal backlash.
Sandy Huffaker/AFP/Getty Images

It was deeply significant—but not for the reasons people think.

On June 1, United States President Donald Trump shook the Democratic Party, the news media and the radical liberals when he pulled America out of the Paris climate agreement. Many people acted shocked, but this was something Mr. Trump promised he would do when he was campaigning for office.

People cried out that President Trump’s move endangers the future of the planet. This issue is deeply significant—but not at all for the reason they gave.

Everyone should want a clean environment and for everything to function properly. We should be good stewards of this beautiful planet. But the Paris Agreement was not about that.

What was it really about?

What America Agreed To

The details of this accord are shocking. President Barack Obama joined it in 2016 by executive order. He bypassed Congress because he knew Congress wouldn’t pass it. It was a dictatorial move.

The agreement obliged America to lead developed countries in paying $100 billion a year for actions on climate change. And who would the money go to? The United Nations. Does anyone really believe the UN would have wisely used that money to protect the environment? It may be the most corrupt institution in the world!

When America joins an agreement like this, it immediately begins paying and keeping all the regulations. Not so with other nations. China, which is the greatest polluter in the world, only agreed to “achieve the peaking of carbon dioxide emissions around 2030”—which means its emissions could keep increasing for the next 13 years! India secured a similar deferment. How committed are these nations to actually following through on their pledge? It’s not like China cannot afford to pay—it is growing to become the top economy in the world.

This is so often the case with agreements like this one: Other nations cheat, while America is expected to keep all its pledges immediately.

Supporters of the Paris Agreement say the only way to prevent catastrophic climate change is to reduce carbon dioxide emissions. The U.S. leads the world in eliminating these emissions. These efforts are extremely costly, and many governments want to increase regulations even more—rules that would gut the American economy.

With the Paris Agreement, America funnels millions of dollars into the United Nations—millions of dollars the deeply indebted U.S. does not have. Of course the UN wants America’s economy and influence diminished; the U.S. challenges that organization so much of the time.

What is happening here is not about the environment. It is about destroying the United States. The regulations this accord binds America to abide by, and the funding it obligates America to provide, accomplish that purpose very nicely.

Not About Environment, but Control

These “environmentalists” talk like the scientific community unanimously agrees that carbon dioxide emission reduction is the solution, and if we don’t take action immediately, the planet is doomed. The reality is that there is far from being a scientific consensus on this point. (Read our article “Greenhouse Apocalypse.”) In fact, examples abound of scientific fraud supposedly proving man-made climate change.

Why would scientists deceive the public on this topic? Well, if you see who is really behind it, you understand that the real issue here is control.

Environmental regulation gives significantly more power to bureaucrats. The governments most in favor of confronting climate change are the socialist, Marxist-type governments that want to control everything. Most of the money collected for climate change initiatives goes to these types of governments.

Governments direct research money toward studies aiming to reinforce the notion that such regulation is necessary. Contrary information is ignored or discredited. But there is plenty of such information out there.

Climate change has become something like a religion for the radical left. They believe it as an article of faith regardless of the evidence. It is a tool they are using to increase their control.

President Trump correctly recognized that the Paris Agreement took matters out of the control of the people.

In a written statement, Mr. Obama commented on Trump’s withdrawal from the accord. “[E]ven as this administration joins a small handful of nations that reject the future,” he wrote, “I’m confident that our states, cities and businesses will step up and do even more to lead the way and help protect for future generations the one planet we’ve got.”

Mr. Obama has left office, but he is still doing all he can to promote his agenda, along with the radical left. Here he is encouraging states, cities and businesses to undermine the policy established by the president.

This man singlehandedly, autocratically signed America up to the Paris Agreement. That is the way he governed for eight years. He said he wanted to “fundamentally transform the United States of America” and he did so. He flouted the law and the constitutional limits of his office to do what he wanted. He assumed power that wasn’t his.

Like many other of Mr. Obama’s actions, the Paris Agreement weakened America and empowered America’s critics and enemies. That has been his intent from the beginning!

The weaker America is, the more vulnerable it becomes to being controlled. That is exactly what the radical left wants. It is using the issue of the environment in order to get it. The Obama administration didn’t want to get climate change under control; it wanted to get America under its control! Proponents of deals like this want to control the world.

Where does such thinking come from? That is actually a very satanic mindset—explained in many places in your Bible.

Efforts to reverse climate change may look like they spring from good intentions, but there is an evil spirit behind it. It is all tainted by deceit, intimidation, bullying and autocratic tendencies. This is exactly the way a great evil spirit thinks! He wants control and will use any means he can to get it. He is very active in the world today, and the climate change controversy is evidence of this fact. (This is obviously a provocative point to make, but you can prove it. Request a free copy of my booklet America Under Attack, which explains this little-understood reality.)

Many people become very emotional about climate change and in some cases completely lose their tempers when they go on tv. Satan thrives by using such attitudes and emotions. If you are guided by your feelings, the devil will use that.

And there is another crucial reason why this evil being is pushing this issue so hard.

Former Secretary of State John Kerry said that the real horror of President Trump pulling America out of the Paris Agreement is the terrible storms happening because of climate change. But is climate change causing these storms?

Satan is trying to get people focused on the complicated topic of climate change, which no one really understands. The media and scientists talk about the danger it poses to America and how it will end the world in 10 years. But they have been presenting this farcical notion for 20 or 30 or 40 years now!

We have to understand that it is not climate change causing these “natural” disasters.

Have you ever studied what the Bible says about weather disasters? Most people would reject any notion that what God says on the subject has any relevance. But it does! In fact, God has a lot to say about it, specifically about climatic catastrophes affecting America, Britain and other nations in our day. You can read about these in our free booklet Why ‘Natural’ Disasters?

All the talk about climate change has pushed God out of the picture. The radical left blames every problem on climate change. But the Bible says that most of it is from God! God is plaguing this land in a terrible way to get our attention! And these plagues are about to get a lot worse.

The world has to be warned of this. But Satan knows that the idea of climate change diminishes that warning. It gives this world an out, an excuse to not listen to God’s warning.

There are far more dangerous and immediate threats to our planet than the environmental disasters that our carbon emissions will supposedly bring within the next several decades.

That threat is a thousand times worse than climate change! Those bombs could extinguish all life from this Earth!

The warped notion that climate change is our worst threat diverts our attention from the real issue!

God prophesied this—and I can prove to you that it is for America today: “I also will do this unto you; I will even appoint over you terror” (Leviticus 26:16). Read that whole chapter in the Bible, and you can see many curses that fall on us because of our godlessness. God sends that punishment in order to wake us up to our spiritual sickness. Shouldn’t knife-wielding radicals terrorizing innocent people turn people to God?

Mankind scoffs at the idea of God being involved in the nations of Israel today. But God says our curses and enemies are going to overtake us!

The terrorism and plagues in this country were prophesied by God! And they are going to get far worse—because of our egregious spiritual sins. But Satan wants you to think that all the problems are a result of our emitting too much carbon dioxide!

But soon the plagues on our nations will overtake us—and crush the radical left’s hope for control along with it. Nations and organizations all over the Earth are working diligently to bring America down. This is not something America’s president can solve. He is trying very hard to get people to look to him, so he can “make America great again.” But there is no hope in any solution unless we turn not to a puny man, but to God.

This world must learn the lessons God wants us to learn. He is sending all these plagues just as He said He would if the nations of Israel turned their backs on Him. (These include America, Britain and the Jewish nation in end-time Bible prophecy. Request our free book The United States and Britain in Prophecy.) Prophecy is being fulfilled at a rapid rate. God will continue to punish until people get the message and realize that it is a fearful thing to fall into the hands of the living God!

But to those who do repent, God offers so much hope—the brightest future you could ever imagine. The solution to our problems is not a Paris Agreement. It is heeding the warning message God is trumpeting, and turning our hearts to God!

From The August 2017 Philadelphia Trumpet
View Issue FREE Subscription
Next