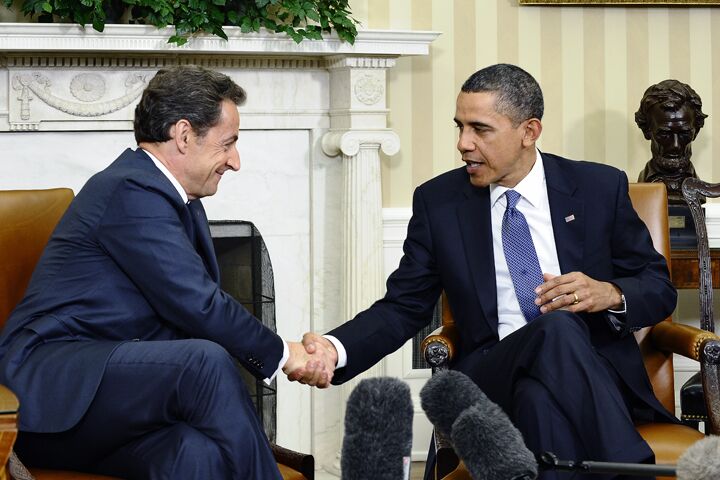 “Just what is Barack Obama’s problem with his country’s longest-standing and most loyal ally, Britain?” wrote James Delingpole in the Daily Express. “First he insults our prime minister, then he allows one of his minions to say that there’s no such thing as the special relationship; and now he goes and declares that his newest, bestest friend is not Britain but perfidious France.”

“I’m getting a bit fed up with the American president using terms like ‘best ally’ so loosely,” said Conservative Member of Parliament Patrick Mercer. “It’s Britain, not France, that has had more than 300 servicemen killed in Afghanistan. That to my mind is a lot more powerful than any political gesture making.”

“And what about that marvellous alliance forged during the Second World War between F.D. Roosevelt and Winston Churchill?” Delingpole wrote. “What about that even more special relationship developed in the ’80s between Ronald Reagan and Margaret Thatcher, when together they won the Cold War? What—apart from the sneaky support it offered during the War of Independence and the War of 1812—has France ever done for the U.S.?”

Michael White, writing for the much more left-wing Guardian, says the idea of France being America’s strongest ally is so ridiculous Obama cannot have really meant it. “But saying that the volatile Sarko, a right-wing populist, and the anti-American French governing elite—much more of a cadre than our own—are America’s strongest allies (or one of several such if you want to read it that way) is demonstrably silly,” he wrote.

He and many other commentators point out that Britain backed the U.S. in Iraq and sent 10,000 troops to Afghanistan, suffering 349 deaths in Afghanistan alone. France sent 3,850 men, all members of the catering corps according to White, and suffered only 53 deaths.

Of course saying that America doesn’t have a “stronger friend and stronger ally” than France is different to saying France is America’s strongest ally. But even to say that Britain is not a stronger ally than France implies there is no special relationship.

Also, it must be pointed out that this type of language is typical of the diplomatic tone adopted by world leaders. For example, when talking about Japan, former U.S. President George W. Bush said: “We had no stronger ally—and we still have a strong ally in Prime Minister Abe, by the way, from Japan—but no stronger ally in recognizing that democracy is the long-term solution to defeating this ideological enemy.”

Nonetheless, as many of the British commentators picked up, Obama’s remarks in France are not a one-off statement, but the latest in a string of snubs and rejections of Great Britain. When viewed as part of that trend, it is yet another piece of evidence that the special relationship between the UK and the U.S. is over.