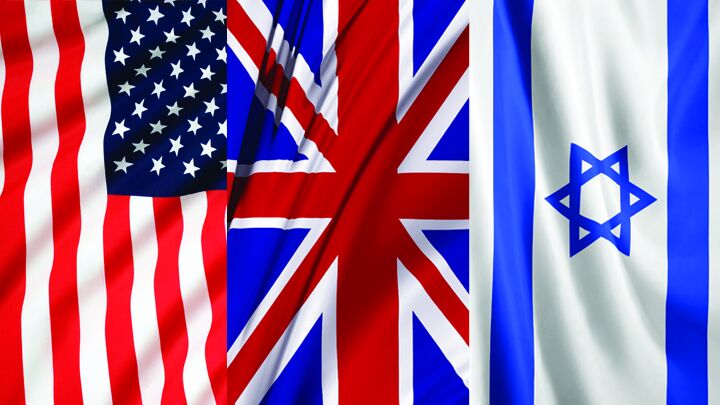 This brotherhood among three peoples—the Americans, the British and the Jews—has been intimate the last two centuries because of historical ties rooted in the very first book of the Old Testament—and because of God’s hand in establishing these end-time nations and raising them to unprecedented heights of world power. This critical historical context is fully explained in Herbert W. Armstrong’s book The United States and Britain in Prophecy. (We will send you a free copy upon request—see the back cover of this magazine for details.)

You can see from newspaper headlines that these three nations are now in the midst of an astonishing free fall from their former positions of world dominance. That’s because, just as God prophesied of our rise to power, He also prophesies of our simultaneous fall.

Coinciding with this precipitous decline in world power and influence is the unraveling of the relationship that once bound these three brothers so tightly together. The Prophet Isaiah described this dramatic unraveling, which occurs just before the latter-day appearance of the prophesied Messiah. “Manasseh shall devour Ephraim,” Isaiah wrote, “and Ephraim Manasseh; Together they shall be against Judah” (Isaiah 9:21, New King James Version).

These three Israelite nations—which have maintained such strong and durable alliances through generations—were prophesied, in our day, to forsake their special alliance and to engage in furious strife and contention with one another.

That is happening before our eyes.

In June, the United States concluded a deal that allowed four Guantanamo detainees to settle in the British colony of Bermuda. According to several reports, British officials at Downing Street knew nothing about the arrangement Washington made with Britain’s oldest colony.

Said one Labor mp, “The U.S. is clearly determined to act in what it perceives as its own national interest even riding roughshod over what it should have done, which is spoken to the British government” (Daily Mail, June 15; emphasis mine throughout). Investor’s Business Daily wrote that by secretly foisting terrorists off on a British colony, the United States was effectively scrapping its special relationship with the UK.

This relationship has been rapidly deteriorating since the beginning of the year.

Barely a month into office, U.S. President Barack Obama ditched the term “relationship” in favor of “partnership” when describing America’s association with Britain. This change coincided with his administration rejecting Britain’s offer to extend the loan of a bust of Winston Churchill that had been situated in the Oval Office since Sept. 11, 2001.

Then there was President Obama’s chilly reception for British Prime Minister Gordon Brown in early March, which consisted of a 30-minute chat inside the White House. Afterward, as a parting gift, Obama presented Brown with a dvd collection of 25 Hollywood movies. When the British responded angrily to what they saw as a snub from President Obama, a White House official excused the slight by saying the new president had been “overwhelmed” by the economic meltdown.

The real views of Obama’s administration were laid bare by one State Department official who helped plan for the Brown visit. “There’s nothing special about Britain,” the Washington insider told the London Telegraph. “You’re just the same as the other 190 countries in the world. You shouldn’t expect special treatment” (March 7).

The dustup between the two countries in June over the Guantanamo detainees certainly attests to that. Whitehall officials accused the United States of treating Britain “with barely disguised contempt.” The Independent quoted one senior official as saying, “The Americans were fully aware of the foreign-policy understanding we have with Bermuda and they deliberately chose to ignore it. This is not the kind of behavior one expects from an ally” (June 13).

Even as the United States and Britain exchange blows with one another, there remains one common goal that both of them share: hostility toward Israel.

President Obama’s speech in Cairo on June 4 perfectly summarized Washington’s renunciation of any special relationship it once had with Israel (see our cover story from last month).

In 1879, ten years before Adolf Hitler was even born and nearly two decades before Theodore Herzl published The Jewish State, the venerable New York Times made this prediction: “So much has been said for generations of the Jews regaining possession of Jerusalem that it is agreeable to think that they are likely to do so at last. They certainly deserve Jerusalem.” Much had been said, of course, because of the Jews’ millennia-old roots that run through Jerusalem and the surrounding hills of Judea and Samaria.

Palestinians have reinvented this history, claiming the Jews are without legal or historic right to their homeland and that modern-day Israel exists only because of the guilt left hanging over Europe after the Holocaust. In Cairo, the president of the United States legitimized this bit of Arab propaganda.

In the same speech, he delegitimized the “natural growth” of Israeli settlements in Judea and Samaria, as well as Jerusalem suburbs, by demanding, “It is time for these settlements to stop.”

Blaming the failure of the peace process on settlement growth is ludicrous. It is not settlement activity that’s obstructing the process for peace—it’s the presence of Jews. Palestinian leaders remain steadfast in their aspirations for a homeland that includes all of “Palestine”—from the banks of the Jordan River to the shores of the Mediterranean Sea—being ethnically cleansed of any Jewish presence.

Why would the United States now elevate the marginal issue of settlement growth to the top of its Middle East peace agenda? This only applies intense pressure on an already fractured relationship between Washington and Jerusalem.

This, as several commentators noted, is exactly what the new American government wants. In creating this crisis, Stratfor explained, Obama wins no matter what Israel’s response. “If Netanyahu gives in, then [Obama] has established the principle that the United States can demand concessions from a Likud-controlled government in Israel and get them” (June 8). And if Netanyahu doesn’t give in, which is much more likely when viewing the collision from a prophetic standpoint, Obama can drive a wedge between the U.S. and Israel and then “use that split as a lever with Islamic states,” Stratfor noted.

The United States, in other words, has effectively decided to abandon its most dependable ally in the Middle East in hopes of boosting its standing in the Muslim world.

Britain has followed a similar course for some time now.

Earlier this year, amid widespread European protests against Israel’s operation in Gaza, anti-Semitic hatred and violence was especially ugly in London, where more than 100,000 protestors took to the streets in open support for Hamas. More telling than the mass demonstration itself was the astonishing fact that British authorities did nothing to curb the incitement of hatred toward Jews.

In fact, more and more, Britain’s domestic and foreign policies actually encourage anti-Semitic behavior. Last December, for example, Britain spearheaded an unsuccessful push in the European Union to tie any special favors for Israel directly to the Jewish state’s diplomatic progress with the Palestinians.

That same month, several weeks before President Obama was sworn in, Gordon Brown wrote a letter to the Palestinian Authority prime minister to express his “frustration” over the settlement activity. “The UK is now looking at what effective action we can take to discourage settlement expansion,” he wrote.

Also in December, the British government issued an advisory warning to British citizens telling them not to purchase property in East Jerusalem, the West Bank or the Golan Heights—territories 10 Downing Street envisions as a future Palestinian state. Israelis viewed the advisory “as the latest in a series of less-than-friendly steps toward Israel,” the Jerusalem Post wrote (Dec. 23, 2008).

Another of those steps came in July, when London partially halted arms exports to the Israeli Navy. Britain revoked five of its 182 weapons export licenses, thereby blocking the sale of spare parts for Israeli gunships. The British made the decision because these gunships were used in Israel’s military operation in Gaza in January—even though one of Britain’s top commanders has said that “the idf did more to safeguard the rights of civilians in a combat zone than any other army in the history of warfare.” Meanwhile, British politicians have voted to pledge $30 million to train and support Palestinian security forces.

America against Britain—Britain against America—both of them united only in their blatant hostility toward Israel.

We’ve been predicting this division for many years, thanks to two specific prophecies found in Hosea 5:13 and Zechariah 11:14. In the latter verse, God said He would “break the brotherhood between Judah [modern-day Israel] and Israel [primarily the United States and Britain].”

This is why in Hosea, God says that Judah, after being mortally wounded by the peace process, will seek help from Germany rather than from the United States.

Yet, despite the unraveling ties that once bound these three brothers together, all three nations are inextricably linked by another end-time prophecy, which points to our simultaneous downfall. Hosea 5:5 tells us, “[T]herefore shall Israel [including the United States] and Ephraim [Britain] fall in their iniquity; Judah [the Jewish state called Israel] also shall fall with them.”

These two prophecies are, in fact, closely related. For the weakening of those once-mighty ties that bound together the United States, Britain and Judah is only making our peoples more vulnerable to the threat of invasion by ascending world powers!