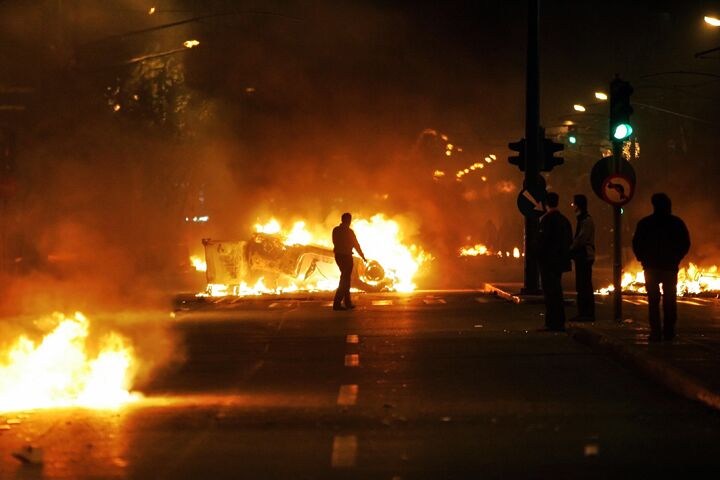 How the Greek riots were planned in advance

Greece is in trouble. Thousands of rioters rampaged through Athens. Angry youths attacked the Athens court house with petrol bombs. Broken glass and burned-out wreckage lay in the streets.

But the riots of the past week and a half are also a sign of a far greater upheaval that is threatening to engulf much of Europe.

Athens isn’t the only Greek city to be hit. Roughly half of the country’s workforce is on strike. One resident of Thessaloniki described the city as “a war zone.” Protesters wounded 12 police officers in 10 different cities in one night.

The rioting started December 6 after police shot and killed 15-year-old Alexandros Grigoropoulos. His death triggered a fierce reaction across the country.

But Alexandros’s tragic death was simply the spark. The real fuel for the fire came from Greece’s troubled economy.

Many of the people rioting are angry about the government’s handling of the economic crisis. The unions want higher social spending, wages and pensions. Greece’s two largest unions, the General Confederation of Workers of Greece (gsee) and the adedy civil servants union, had planned a public demonstration in protest of the failing economy before Alexandros’s shooting. The melee caused by this huge demonstration merged with the mass youth riots to create chaos on city streets in Greece and grind the nation to a standstill.

The Greek government can do little to fix the nation’s economy though. Greece’s fate was, in many ways, sealed seven years ago.

In 2001, Greece adopted the euro. At that point, Greece’s succeeding economic boom and following bust became inevitable. Columnist Ambrose Evans-Pritchard explains the situation in the Telegraph:

[T]here is obviously a problem for countries like Greece that were let into emu [Economic and Monetary Union] for political reasons before their economies had been reformed enough to cope with the rigors of euro life—over the long run. …Greece’s euro membership has now led to a warped economy. The current account deficit is 15 percent of gdp, the eurozone’s highest by far. Indeed, the deficit ($53 billion) is the sixth-biggest in the world in absolute terms—quite a feat for a country of 11 million people.

Greece’s foreign debt is a staggering 91 percent of its gross domestic product. Greece’s banks are in crisis. The government has pledged to bail them out with €28 billion. But with Greece’s economy in such bad condition, the Greek government will have difficulty borrowing the €28 billion it wants to give the banks. This could mean it will have to take the money away from its social welfare programs.

That would make social unrest in Greece even worse.

There is no way out. And, according to some analysts, it was designed from the beginning to become that way.

Bernard Connolly is a civil servant who authored The Rotten Heart of Europe, which exposed the evils of the European Exchange Rate Mechanism and the truth about the European Union. Over a year ago, he explained the process in an article in the Telegraph (quoted by theTrumpet.com):

The EU quite deliberately created the most dangerous credit bubble of all: emu. And, whereas the mission of the Fed is to avoid a financial crisis, the mission of the ecb [European Central Bank] is to provoke one. The purpose of the crisis will be, as Prodi, then Commission president, said in 2002, to allow the EU to take more power for itself. The sacrificial victims will be, in the first instance, families and firms (and banks and investors) in countries such as Ireland and Club Med. Subsequently, German savers (or British taxpayers) will bear the burden of bailouts that a newly empowered “EU economic government” will ordain.

When the current European economic union was formalized, it became inevitable that countries like Greece would eventually face economic challenges. Through the inclusion of Germany, the economic union allowed for European-wide interest rates that were much lower in countries like Greece than would normally have been possible. Low interest rates encouraged massive borrowing and artificially stimulated a boom. But as with all bubbles, eventually it popped. What Greece, and other countries in Southern Europe in particular, is dealing with now is the aftermath.

In addition, “Germany entered the euro with an overvalued exchange rate,” wrote Connolly. “It then faced a long period of high unemployment that drove wages down and restored its competitive position.” He continued:

That combination, and Germany’s initial uncompetitiveness, created booms in many other emu countries. But, as in the U.S. in the 1920s and again in the 1990s, inappropriate interest rates and temporarily booming growth totally distorted perceptions of today versus tomorrow. The result has been that firms and families in these countries have massively over-borrowed and banks and investors have massively over-lent, often on the illusory security of inflated house prices.

The United States is currently trying to solve its debt-related problems by lowering its interest rates and making borrowing easier. This is treating the symptom: It may reduce the pain temporarily, but won’t fix anything in the long term. Nations like Greece, though, do not have even this option. They cannot change the interest rate to a level that suits them—they are stuck with whatever the ecb decides. And the ecb is most heavily influenced by Germany.

It is not just Greece that is caught in this trap. Spain’s economy too has gone through a similar process to what Connolly described, and now the International Monetary Fund is predicting that its unemployment will reach 15 percent. Ireland and Denmark are also paying the price of overheating their economies.

Does this mean that it is over for a single European currency? Not at all.

As both the Trumpet and men like Connolly have been warning, Berlin has been planning for this crisis before it even adopted the euro. European elites knew it would eventually come. And they will soon present a solution.

In this context, it is noteworthy that the German central bank holds the second-largest reserves of gold in the world. During the first quarter of 1999, at the same time the euro was launched, Germany bought up huge reserves of gold. Enough, according to the Economic Intelligence Review, to back an entire currency (March 2000). In addition, when the 11 nations joined the euro, they signed over their gold reserves to the European Central Bank, in Frankfurt, Germany. Read this Trumpet story from 2002 that poses one possible outcome to a eurozone crisis.

However it happens, Germany is prophesied to come out on top in this financial crisis. Social unrest and riots will eventually force Europeans to succumb to a strong united government of Europe, led ultimately not from Brussels, but from Berlin.

Greece is just one of the first places to have trouble. But national economies across Europe are deteriorating, and soon, if trends continue, much of the Continent will be in trouble. As the old saying goes, “Possession is nine tenths of the law.” The European Central Bank is but a revival of the old centralist designs of the Third Reich. The ecb is domiciled in Germany. Its gold reserves are held in Germany. Germany’s most influential bank is Deutschbank, which has massive global investments in international business. Of all the EU member nations, it is Germany that is in the strongest position to dictate terms for any bailouts sought by the EU’s weaker members such as Greece.

Watch Germany. Watch for Germany to be at the helm in a restructuring not only of EU member nations’ economies, but of the entire European Union itself!

The crisis in Greece is a forerunner of a whole rash of similar crises set to soon break out across Europe. They will provide the catalyst for the EU’s leading nation, Germany, to rise to the fore with solutions of its own making to such crises. Bible prophecy declares that the result will be a European superstate with Germany at the helm. For more on this subject, read our booklet Germany and the Holy Roman Empire.