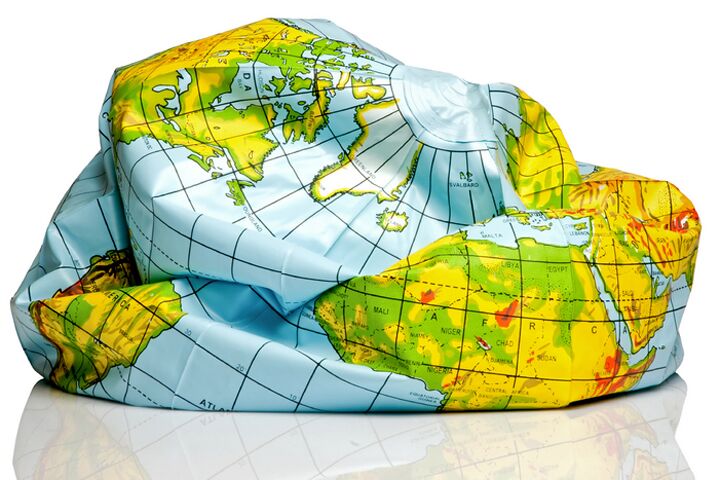 Built on unsafe foundations, our economies are being torn apart from both ends.

Last month, the dreaded specter of deflation officially arrived in the United States. In October, consumer prices fell by the largest amount since records began in 1947. But if things are getting cheaper, why is that a bad thing?

Deflation is one of the deadliest diseases an economy can catch, because once it gets started, it can be very hard to stop.

Deflation causes a vicious cycle that can cause an economy to spiral out of control. As the economy slumps, people have less money. Consequently, to boost sales, companies slash prices and start cutting costs. This means laying off workers or lowering wages. Once this begins, people have even less money available and are less confident. So they spend less. This leads firms to again lower prices to attract buyers, and cut even more costs—which means reduced profit and increased bankruptcies and layoffs. And so the cycle repeats, reinforces itself, and creates one great big mess.

But when you throw massive debt into the mix, things get even worse.

Imagine you owe a friend $100. You get paid $10 a day. If you gave all that to your friend, it would take you 10 days to pay off the debt. If your wages deflate to $9 a day, it would take you just over 11 days to pay off your debt. Extrapolate this example into terms of the hundreds of thousands of dollars people owe on their mortgages, and you can see how quickly debt can become a big problem in a deflationary cycle. In relation to how much you get paid, in real terms, deflation makes your debt bigger.

On a national scale, this can mean disaster. America is saturated in debt. It is not merely a problem with the system. Debt is the system. It is so bad now that the American, British and other English-speaking economies function only because of debt. To trigger a deflationary spiral in such debt-ridden countries, all it takes is a situation in which money gets tight. Debt payments become more difficult, people start cutting back, and the nation gets caught in the trap of deflation.

This may have begun in the U.S. last month.

Usually, most Western economies aim for an inflation rate of around 2 percent a year to keep deflationary forces at bay. But in October, the general price level in the U.S. fell 1 percent. Much of this is to do with falling oil prices. But the core Consumer Price Index rate, a measure of the change in prices excluding volatile products like food and energy, was -0.1 percent, the first fall in the core rate in over 25 years.

Naturally, some economists are becoming worried. And not just about the deflationary threat. It is the government’s response that has some analysts up at night.

While deflation is currently tearing apart the housing- and lending-related sectors, the government it trying to mask over the problem—by inflating the money supply and devaluing the purchasing power of the dollar. By making the dollar worth less, goods will go up in price. This is the strategy of Federal Reserve Chairman Ben Bernanke, who famously remarked that if major deflation set in, he’d start dropping money out of helicopters to combat it.

In fact, the Federal Reserve is trying to increase the money supply on an unprecedented scale.

But you can’t simply create a bunch of money and fix the problems of deflation. Inflation and deflation may be opposing forces, and on paper they may be made to look to be balancing each other, but in reality they can both radically inflate and deflate various aspects of the economy at the same time. When the Fed creates money, it is simply trying to fix one effect of deflation without going anywhere near the cause. The Fed simply has no idea where the new money is going to end up.

The last time the Fed juiced the money supply—after the economy headed into recession following the dot-com crash and 9/11—all the excess cash fueled the housing boom. That bubble has burst, and the deflationary collapse is now wiping out America’s construction, real-estate and banking sectors. The government’s solution has led to an even bigger problem.

So now the Fed is trying to inflate the economy again by increasing the money supply and devaluing the dollar. But this will only create another bubble somewhere else. This volatility and instability, the booms and busts, associated with inflation (money creation) and the ensuing deflationary crashes, are ripping apart and destroying varying sectors of America’s economy.

Unfortunately, none of the solutions put forward by economists today can work. None of them address the core of the problem.

The modern financial system is built on fiat currencies, which at their heart are really an attempt to get something from nothing: just creating more dollars to buy things. Deflation is one of the prices paid for trying to cheat. America’s economic system is built on a terribly wrong foundation: a system of greed, of spending what you don’t have, of debt, and of get.

The U.S. economy is like a man sitting on a chair missing two legs. At times he may be leaning forward, and other times backward. But at some point an over- or undercompensation will land his face in the dust, or him flat on his back. The economy now looks like it is being sucked down by deflation. But the inflationary “quick fix” could send the economy reeling over backward. There is no nice equilibrium when it comes to deflation and inflationary fixes. There is no true stability. It is impossible because the whole system is faulty.

For an indication of how the inflation-deflation struggle may play out, read “The Coming Storm.” And for an actual, real and radical solution that would work, read “A Suggestion for Correcting the Economy.”