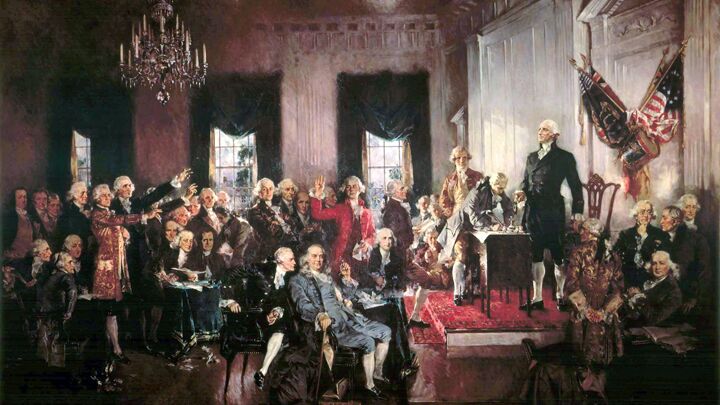 Early immigrants who came to the United States were often persecuted in the countries they left. They usually lacked religious freedom.

The famous British historian Paul Johnson wrote an article titled “No Law Without Order, No Freedom Without Law.” It was printed in the Sunday Telegraph, December 26, 1999. In it he wrote, “[B]oth in Virginia and in New England to the north, the colonists were determined, God-fearing men, often in search of a religious toleration denied them at home, who brought their families and were anxious to farm and establish permanent settlements. They put political and religious freedom before riches …. Thus took shape the economic dynamo that eventually became the United States—an experiment designed to establish the rule of God on Earth …” (emphasis mine).

What a goal. They planned to establish the rule of God on Earth! That means they had the goal of each person keeping the Ten Commandments of God—the basis of all righteous law.

How many Americans are willing to face that reality? Not many. Because then we would have to see that, today, we often fight not to establish law, but to promote lawlessness!

In 1954, Supreme Court Chief Justice Earl Warren wrote, “I believe the entire Bill of Rights came into being because of the knowledge our forefathers had of the Bible and their belief in it.” What political or religious leaders would make such statements as these men did? Even the politicians who established our republic were more spiritual than most of our religious leaders today!

We can’t afford to take the words of our founders lightly if we want to see our nation stand.

It was much harder for our Founding Fathers to spill streams of blood winning our freedom, and to create and establish our constitutional law, than it is for us just to maintain it! So we ought to respect our Founding Fathers above ourselves. But we are too vain and arrogant to see how profoundly strong they were and how pathetically shallow and weak we are.

The Constitution was based to a great extent on God’s law. That is why I believe it is the most noble document ever written by a government of this world.

What a rare document it is. Our forefathers had the awesome opportunity to establish the rule of God in the wealthiest country ever. So they established a Constitution to protect all of us from the extremes of human reason. Tyrants, unjust judges and biased leaders were controlled by this law.

We see indescribable confusion about the Bible today. Why? Because people won’t let it interpret itself!

We received some foundational direction from Britain’s Magna Carta. But Britain has no Constitution.

Our persecuted forefathers wanted their protection spelled out in detail. They had suffered intensely at the hands of tyrants. Such tribulation deepens a people’s understanding about the value of freedom.

Will we have to experience indescribable tribulation before we can appreciate our freedom, which is given to us by the rule of law?

I have written a new booklet I would like to offer you: No Freedom Without Law. It explains why firm, godly law is vital foundation for any society. Write for your free copy today!

From The December 2001 Philadelphia Trumpet
View Issue FREE Subscription
Next