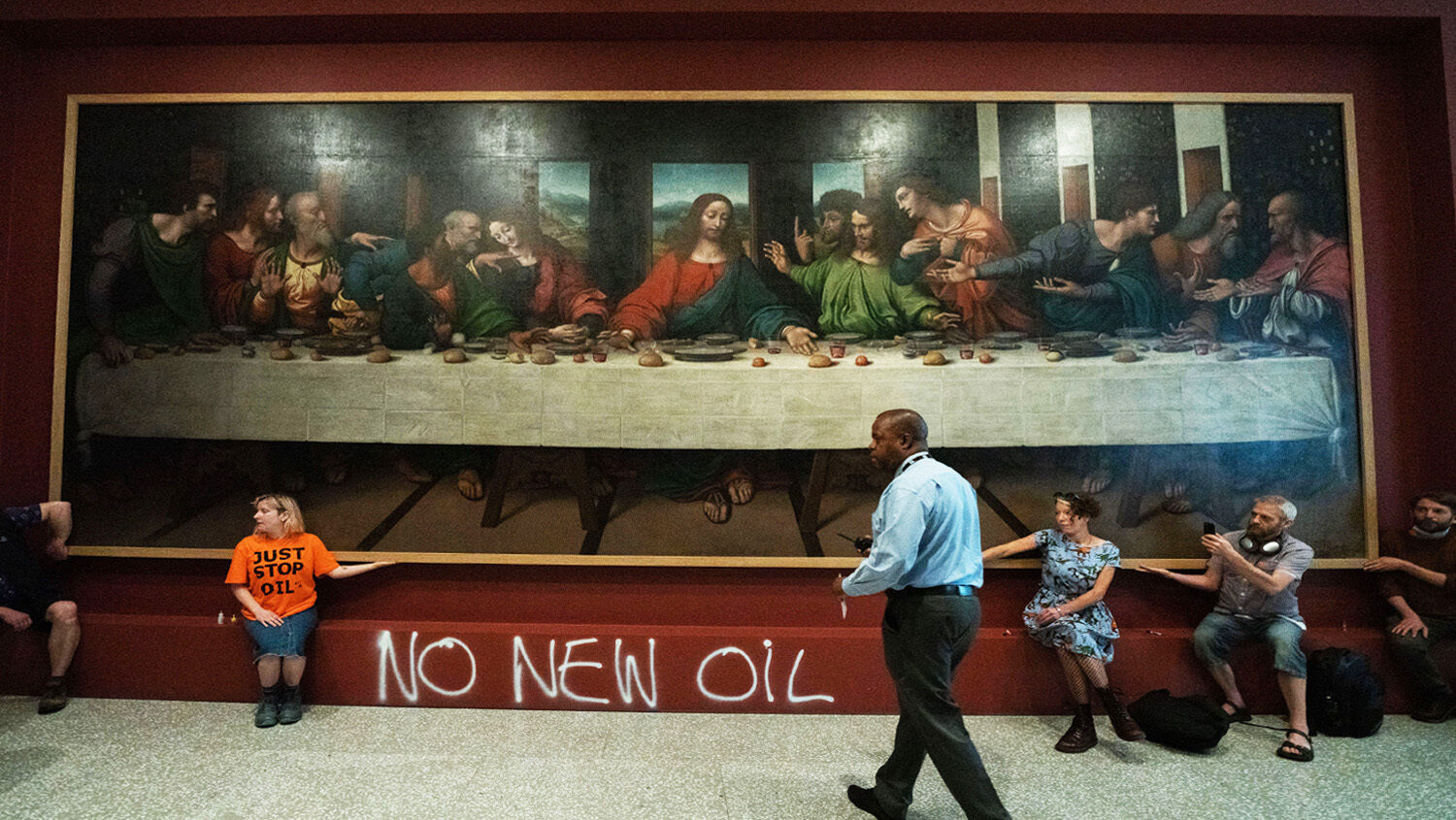 Just Stop Oil activists spray-paint the wall and glue themselves to the frame of The Last Supper on July 5 at the Royal Academy, London.
Kristian Buus/In Pictures via Getty Images

Is vandalizing art a good way to save civilization, or destroy it?

In a quiet annex of the cathedral at Valletta, Malta, is a small exhibition on the Italian artist Michelangelo Merisi da Caravaggio. Caravaggio lived in Valletta and produced some of his finest works there. In dim lighting sits one of these masterworks, Saint Jerome Writing. I saw the painting for myself last month while visiting Malta.

I’m not Catholic. I doubt many of the fellow tourists I bumped into were on a pilgrimage. Yet one doesn’t have to be Catholic to appreciate Caravaggio’s chiaroscuro—exaggerated contrast between light and dark. The hyperrealism of Caravaggio’s Jerome—the furrowed brow, the folds of fat on his stomach, the musculature withered with age, and bones protruding from under his skin. This is textbook Baroque art: “desire to evoke emotional states by appealing to the senses, often in dramatic ways,” according to the Encyclopedia Britannica.

There is a reason why art—even art from foreign cultures—is appreciated by people all over the world. The great artworks of history are like a time capsule—a message an artist sent centuries ago—communicating emotion, beauty, creativity. These are universal themes that anybody can appreciate. And this is part of the reason museums displaying these great works exist.

But such great works of art are under attack all over Europe—the birthplace of Western art tradition. And it’s for a surprising reason.

Climate activists have been looking for more provocative ways to protest fossil fuel use. A new, popular method is splattering famous artworks with messy substances and then gluing oneself to the paintings. And they’ve been doing this for months. In May, a climate activist threw cake at the Mona Lisa at the Louvre in Paris. In July, activists at London’s Royal Academy of Arts glued themselves to a copy of Leonardo da Vinci’s Last Supper. Later that month, activists glued themselves to Sandro Botticelli’s Primavera in Florence’s Uffizi Gallery.

Our government are backtracking on all of their climate targets whilst people die from climate change across the globe.

There will be not art and culture in a state of “total societal collapse” pic.twitter.com/8vEJ3Qx1EB

In the months since, climate activists all over Europe have copied these techniques. On October 14, protesters at London’s National Gallery threw soup on Vincent Van Gogh’s Sunflowers. They then proceeded to glue themselves to the painting’s frame. Nine days later, activists threw mashed potatoes at Claude Monet’s Grainstacks in a museum in Potsdam, Germany. On October 27, Dutch activists glued themselves to Johannes Vermeer’s Girl With a Pearl Earring in The Hague.

Activists with @JustStop_Oil have thrown tomato soup on Van Gogh’s Sunflowers at the national Gallery and glued themselves to the wall. pic.twitter.com/M8YP1LPTOU

Possibly the most visually dramatic protest was on November 15 at the Leopold Museum in Vienna. Climate activists splattered a dark, oily liquid on Gustav Klimt’s Death and Life.

Climate activists have attacked a painting by Gustav Klimt with a black, oily liquid before another glued their hand to its frame.

In a video of the moment, one of the climate activists can be heard shouting “we have known about the problem for 50 years”https://t.co/9bkO0nNBjy pic.twitter.com/ZDo6xOWrSW

Some of the paintings attacked are among the world’s most famous. These include Vermeer’s Girl With a Pearl Earring and Edvard Munch’s The Scream.

The paintings received minimal-to-no damage. Many famous artworks are protected behind glass for incidents like this. But one wonders what could have happened to the works if they didn’t have such protection beforehand. And one has to wonder which famous work of art will be next—and if it will survive.

The activists are attacking such works of art as an easy way to get attention for their causes. Admittedly, if you believe that axing fossil fuels is a matter of worldwide life and death, saving lives would obviously matter more than inanimate canvases. This viewpoint ignores the skewed and erroneous research used to support the idea of man-made climate change (you can read about that here). It also ignores many activists’ ulterior political agendas (you can read that here).

But even if none of this were true, these events still raise important questions. Are the great works of Western civilization worth being destroyed to advance political goals? Is there any actual, real value in such artworks?

First, let’s stop and think why the institution of the art museum exists.

Art quickly became a medium for inventors. Whether it was Jan Van Eyck experimenting with oil paints for the first time, Leonardo Da Vinci applying his studies on anatomy to his portraits, or Claude Monet challenging the world’s impression that art has to be realistic to be beautiful, the painted canvas has for hundreds of years been a laboratory for innovators to try new things.

Beauty, science, politics—these are all universal themes that make us fundamentally human. Art is meant to capture a little bit of that humanity, package it in a medium that is enjoyable and thought-provoking, and hand it to the masses for ocular consumption. And generations have been appreciating the same paintings for hundreds of years for their universality.

“Loving art does not devalue life,” Jonathan Jones wrote in a November 16 Guardian article. “On the contrary, it helps us value and see nature. All the art in the National Gallery in London, where the soup attack happened, from Giotto to Van Gogh, is based on looking hard at life. It praises our planet.”

In short, art teaches something about ourselves. This is why the Western art tradition is celebrated as one of Western civilization’s greatest achievements. And this is why the latest climate protest trends are so concerning. Climate protesters claim to be fighting to save civilization. But they are actually contributing to its destruction. Like the barbarians who felled the Roman Empire, they are bringing Western civilization to a new cultural dark age. It’s a much less violent fall. But it’s still a cultural fall.

“There’s no chance of governments changing their policies because of these protests,” Jones wrote. “There’s every chance, however, that a great work of art will eventually be destroyed. … There’s a deliberate flirtation with destroying art, an implicit threat to go all the way, which expresses contempt for art and the museums that try to conserve and protect it. … Death and Life, the Klimt painting is called. Those who attacked it think they are fighting for the latter, but they could well be fighting for the death of art itself.”

There’s more to the story, however. Art is an expression of our fundamental humanity. But it also points to a higher truth.

Humans are not the only life forms on Earth that can create. Birds build nests. Beavers build dams. Spiders build webs. But when finished, the spider doesn’t take a step back, examine its web, and wonder what symbolism the geometric network is trying to convey. People can teach animals like elephants how to paint. But there isn’t any evidence the elephant can appreciate what it’s doing on the same level as a human. Appreciating artistic endeavors is a uniquely human trait.

“Your ability to be inspired by a symphony, to be enriched by a sculpture, or to be uplifted by a sunset is a miracle,” Ryan Malone writes in How God Values Music. “That ability is possible because of the godlike mind that God created in you. … This ability makes the human being a unique creation. No animal has this ability. God gave it only to man because of our unique and special purpose. A feature of the unique, godlike mind that humans possess is the ability to appreciate creative, artistic endeavors.”

When God made man, He made him with a mind that functions similar to His (Genesis 1:26). And God is the greatest artist that has ever lived! Even just looking at the natural world—the beauty of a fading sunset, a shimmering sea or an awe-inspiring glacier—shows this. David wrote, “The heavens proclaim God’s splendour, the sky speaks of his handiwork” (Psalm 19:1; Moffatt translation). Looking up at the evening sky shows God made the original “starry night’ millenniums before Van Gogh painted his famous version.

God is creative. God is a deep thinker. God appreciates beauty. And the divinely inspired book we call the Holy Bible shows that God has a message to give to others. All of this is reflected in art. In a sense, then, art helps us tap into the mind of God. Cultivating these godlike aspects of our human mind is something worth pursuing (Philippians 2:5). And this is why preserving historic artworks is so important.

“[T]hough He calls them ‘the weak and the base,’” Mr. Malone writes, “God exposes His Church to the finest things! They learn all sorts of aspects of godly culture, including good grooming, dress, manners, grammar and, of course, the arts.” Learning to appreciate Western civilization’s masterpieces is a major component of cultural education.

That, of course, doesn’t mean that everything considered “cultural masterworks” is appropriate. The cultural capital of the ancient world was the Greek city of Athens. The Apostle Paul demonstrated his familiarity with classical Greek literature when he quoted to the Athenians the pagan Greek poets Epimenides and Aratus (Acts 17:28). Yet the city’s centers of worship—which were architectural marvels—spiritually distressed Paul (verse 16).

How does one learn what is worth appreciating and what isn’t? Where does one begin to learn how to have a proper cultural diet—God’s way?

The Trumpet provides a variety of resources to help. Our podcast Music for Life is a good gateway on learning how to appreciate fine art music—as is our free booklet How God Values Music. Two other podcasts, Just the Best Literature and Shakespeare’s Royal Education, can help you better appreciate both historic and contemporary literature. And our article from our September 2012 issue “Art—The Good, the Bad and the Mediocre” gives general principles in appreciating creative works of any medium. All are helpful in cultivating a Bible-based cultural appetite.