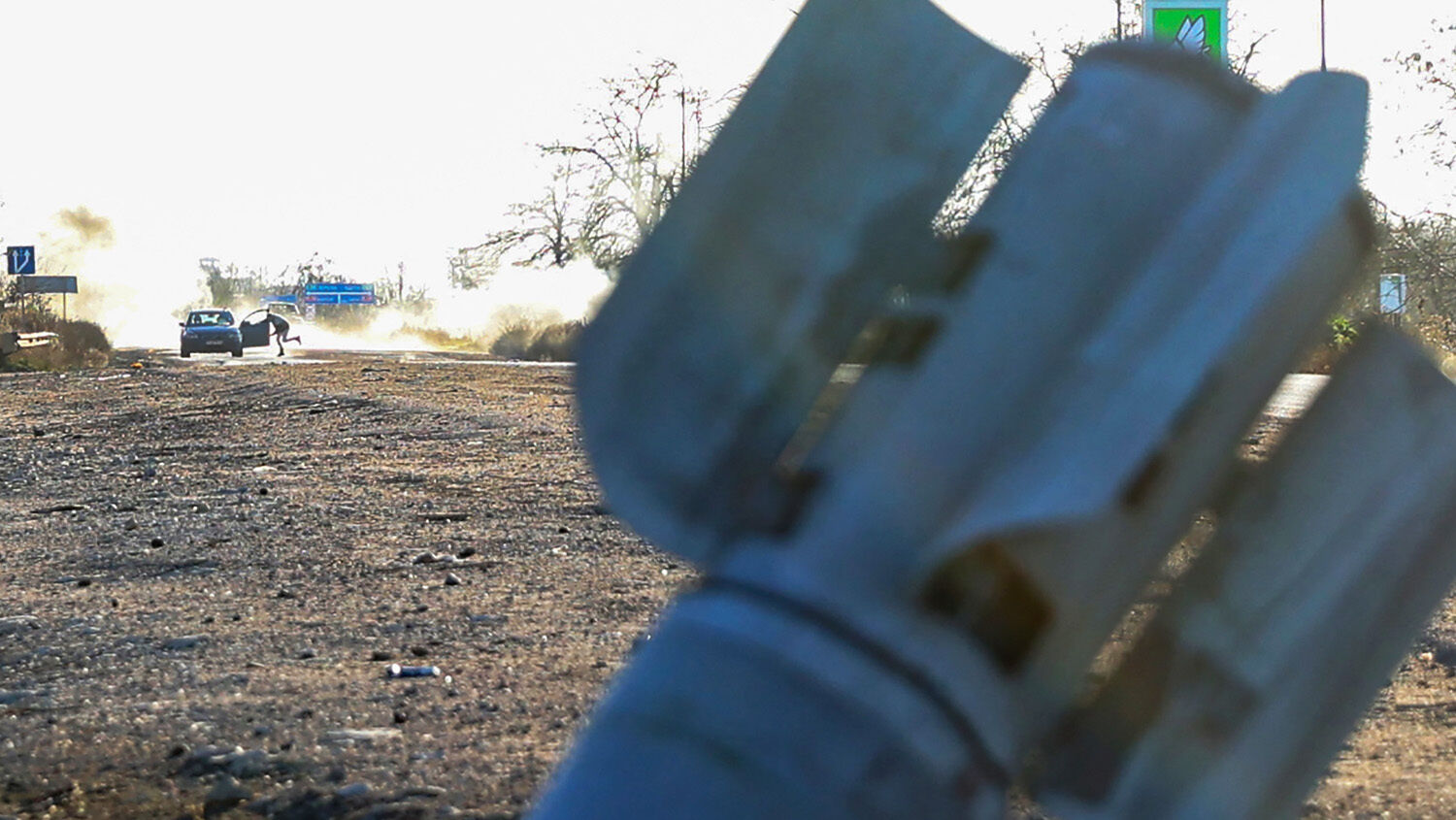 This photograph, taken November 14, shows an unexploded Uragan missile (foreground) and a man running away from another Russian Uragan missile explosion in the Kherson region.
ANATOLII STEPANOV/AFP via Getty Images

Russian missiles struck targets in Ukraine on November 15, with some hitting residential buildings in Kyiv, the capital city, according to a Telegram post by Kyiv Mayor Vitali Klitschko. The air strike marks Russia’s largest since the start of the Ukraine war in February.

Kyrylo Tymoshenko, deputy head of Ukrainian President Volodymyr Zelenskyy’s office, said Ukraine’s air defense shot down several of the incoming Russian missiles, but he added that the “danger has not passed.”

Why now? The attacks come on the heels of Ukraine’s capture of the city of Kherson last week, marking Russia’s biggest loss since its humiliating retreat from Kyiv early this year. It was the latest in a string of setbacks for Russian forces, and it means Moscow will likely be on the back foot in Ukraine for months.

“The Kherson withdrawal … does mark the end of any hope the Russians had of regaining any sort of strategic initiative, or any sort of meaningful offensive operations until at least May.”

After and humiliating Kherson retreat amid a failing mobilization campaign, both of which have enraged the waning pro-war Russian majority (plurality?), the Kremlin clearly aims to dispel the increasingly popular notion of a secret “backroom deal”/”exit strategy” with regard to Ukraine. That, I believe, is the main purpose of the latest attack.

Besides payback for Kherson, Andriy Yermak, adviser to Zelenskyy, said Russia also timed the aerial assault to occur as world leaders assembled for the G-20 meeting in Indonesia.

“Does anyone seriously think that the Kremlin really wants peace?”
—Andriy Yermak

Putin’s options: The Russian military has faltered in its efforts to conquer Ukraine, but Russian President Vladimir Putin cannot afford to lose the war. Today’s aerial strikes show that he remains capable of escalation. And several factors could turn the tide in Russia’s favor.

1. Putin could declare full-scale war, whereas up until now he has just called the campaign a limited military operation.

2. Russia could also possibly persuade China to step in.

3. Russia could also start using weapons of mass destruction, such as chemical or nuclear weapons.

“Yes, Russia could use nuclear weapons. … Putin is trying to tell us in no uncertain terms that we are coming close to his geopolitical red lines and, like a caged animal, he will strike back if we apply too much pressure. That could even mean using nuclear weapons.”
—Harry Kazianis

The Trumpet said: Editor in chief Gerald Flurry wrote about Russia’s invasion on February 25, stating: “I have been warning for more than two decades that Vladimir Putin would be responsible for violent conquests and that he would set in motion some astonishing and historic events.” Mr. Flurry explained that his warning about Putin’s Russia is based on his understanding of the Bible:

Ezekiel 38 is an especially important passage about Russia. … This whole chapter contains staggering understanding about the powerful Russian empire and its widely feared “prince.” …

I strongly believe this “chief prince” is Vladimir Putin, and I have explained why many times over the past 20 years. The alarming and sobering scenes coming out of Ukraine today dramatically prove that this understanding is right. Bible prophecy is being fulfilled this very moment in Ukraine!

Learn more: To better understand Russia’s invasion of Ukraine and to grasp it in the prophetic context, read Mr. Flurry’s free booklet The Prophesied ‘Prince of Russia.’