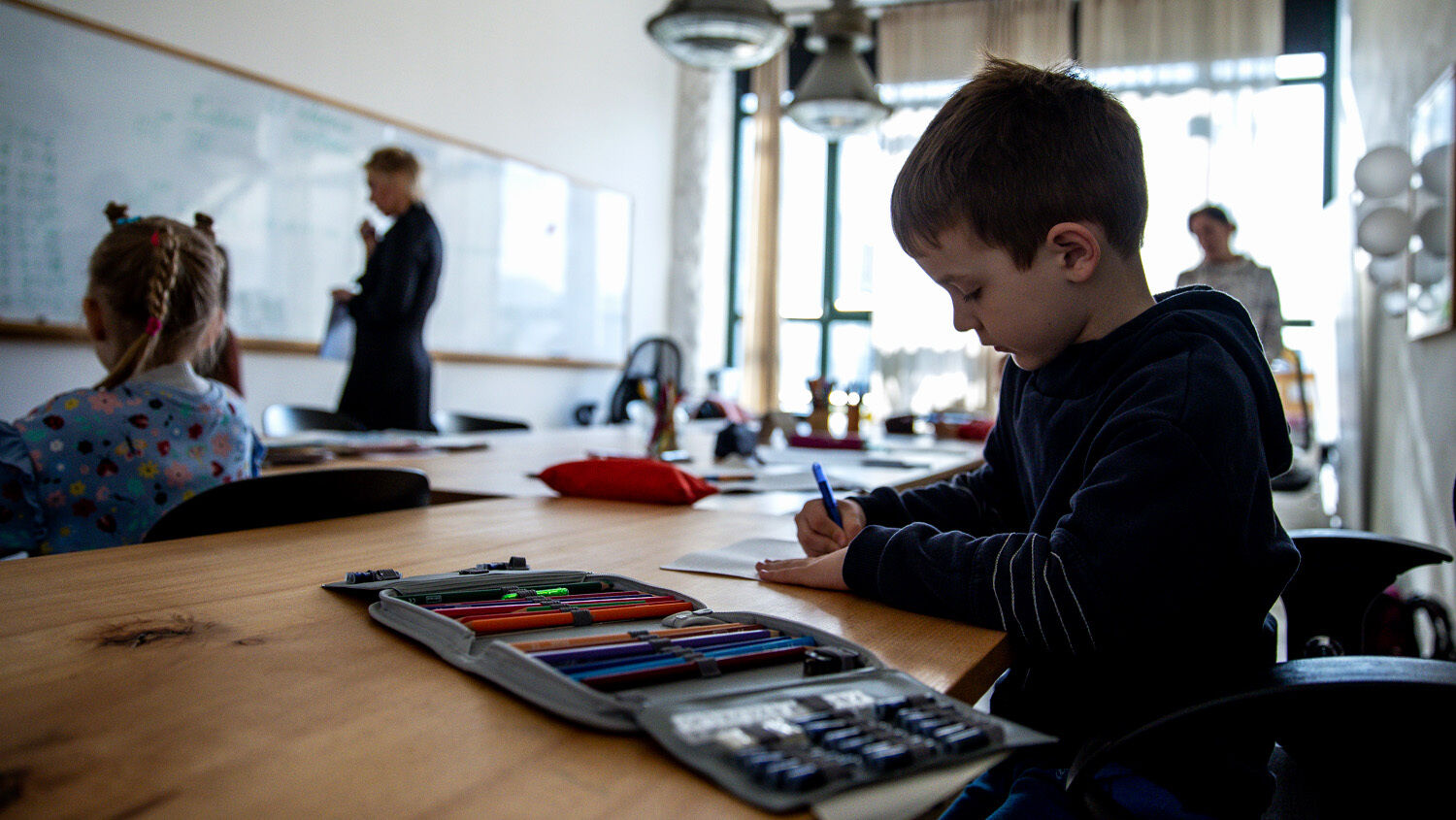 ‘They are part of the Russian war machine.’

Authorities in Russia confirmed on September 13 that significant numbers of Russian schoolteachers have been sent to occupied parts of Ukraine in recent weeks, where they were tasked with indoctrinating Ukrainian children with Russian propaganda.

One Russian government document listing 173 of such teachers was leaked by the InformNapalm website, saying the educators would arrive in Ukraine on September 1 and remain “for a considerable duration” to teach children. The publication labels these teachers Rashists—a portmanteau of “Russia” and “facism” that is often used to describe those who further the expansionist goals of Russian President Vladimir Putin. “We publish this information openly,” the publication wrote, “so that Rashist teachers are aware of their responsibility for aiding the occupation of Ukrainian territory and brainwashing Ukrainian children.”

But such a plea is unlikely to resonate with these Russian teachers who are zealous about indoctrinating Ukrainian children with their nation’s warped worldview.

Andrey Chetvertkov from Elista, Russia, is among the teachers who signed up to move to occupied Ukraine: “I volunteered as a patriot,” he told the Novaya Gazeta. “And I will teach according to the Russian school program. … After all, from time immemorial, Smaller Russia [i.e. Ukraine] was a part of the Russian empire.”

Konstantin Matyukhov, a history teacher from Omsk, Russia, was also among those who volunteered. Before his departure, he was quoted by local media as saying: “I am going not only to teach children but also to carry out extracurricular patriotic work, as well as to help our peoples get closer. After all, there can be no division into Russians and Ukrainians, because we are one Russian people.”

This “one Russian people” doctrine is central in Putin’s justification for the full-scale war on Ukraine that he began in February. In a landmark essay published months before the invasion, Putin wrote: “[T]he idea of Ukrainian people as a nation separate from the Russians” has “no historical basis.”

The main points of the essay (and the broader Putinist orthodoxy) are that Ukraine did not exist until the 20th century and never should have been separated from Russia. The United States orchestrated a violent coup inside Ukraine in 2014 and installed an American puppet government. After some in Ukraine’s eastern Donbas declared independence from this U.S. puppet regime and allegiance to Moscow, “nazified” and meth-fueled Ukrainians spent eight years trying to murder them all. At present, Russia is not at “war” with Ukraine but is waging a noble “special peacekeeping operation” to safeguard people who have been subjected to bullying and genocide. And in the big picture, Russia is a victim that the West is against and has never treated fairly. America’s chief aim is to destroy Russia, and it is using Ukraine as a pawn toward this end.

Those are some of the main aspects of Putin’s worldview. And for most of his 22 years in power, he has been suppressing Russia’s press, rewriting aspects of history, and mandating curricula in his nation’s schools. From cradle to grave, Russians are taught this outlook, and the result is that the majority of them see Ukraine and the world the way Putin does—and they support him.

Political scientist Anton Shirikov told the Washington Post that Putin’s efforts have been so successful that many Russians reject the truth—that most Ukrainians wish to align with the West instead of Russia but not in a way that threatens Russia—even when it comes from trusted friends or relatives. “They have this filter,” he said, so “they will just reject it.”

And now, over a hundred Russian schoolteachers such as Chetvertkov and Matyukhov have been deployed to Ukraine to teach that same toxic ideology to Ukrainian children.

“They are a part of the Russian war machine,” Eastern Europe expert Sergej Sumlenny wrote of the teachers. “Exactly as the Russian soldiers, these people come to Ukraine with their hate against Ukrainians.” He also pointed out that as part of these same efforts, Russian occupiers have forcefully gotten rid of Ukrainian teachers and have received orders to destroy Ukrainian textbooks.

And what happened to Ukrainian books and school libraries? They were purged by Russians. The RU teachers who came as occupational army agents, removed all UKR language books from the libraries, including schoolbooks, fiction books etc. Here two protocols from Kharkiv region. 9/x pic.twitter.com/V6A88xWIkw

Meanwhile, since February 24, Russian forces have forcibly deported hundreds of Ukrainian children into Russia itself, where they are being indoctrinated into Putin’s warped version of truth. Ukraine’s ombudsman for human rights, Lyudmyla Denisova, spoke about this profound tragedy on national television, saying: “When our children are taken out, they destroy the national identity, deprive our country of the future. They teach our children there, in Russia, the history that Putin has told everyone.”

Putin’s efforts to brainwash young Ukrainians is deeply disturbing and gives insight into his broader ambitions. He would like to eventually control the narrative not just in Russia and Ukraine but throughout all of the old Soviet space—and beyond. His corrosive ambition indicates a dark future for Russia, Ukraine and the world. And when current trends are placed alongside Bible prophecy, the indication becomes certain.

When Boko Haram kidnapped Nigerian kids, the whole world got into action. When the Russian government kidnaps Ukrainian kids, it barely even gets noticed. pic.twitter.com/x4vpOzWDv0

The Bible warns that a great alliance of nations will rise from Asia in the modern era. Scripture calls this power “the kings of the east” (Revelation 16:12). In Revelation 9:16, the Apostle John wrote that this military mammoth will have an army of 200 million men.

The Bible provides several key details about this largest army ever assembled. Daniel 11:44, Daniel 12:1 and Matthew 24:21-22 make clear that this alliance will be one of the primary belligerents in a nuclear World War iii. Ezekiel 38 shows which specific nations will contribute troops to this mega-army and says that it will be led by one country—and one individual. Verse 2 states: “Son of man, set thy face against Gog, the land of Magog, the chief prince of Meshech and Tubal, and prophesy against him.”

Bible scholars generally agree that “Gog” refers to Russia and “the land of Magog” includes the vast area where modern-day China is located. Meshech is related to the modern Russian spelling of Moscow: MocĸBa. And Tubal indicates the Russian city of Tobolsk, east of the Ural Mountains.

Yet another name for all of Russia is covert in this passage. There is disagreement over how the Hebrew word rosh in this verse should be rendered in English. The King James Version quoted above translates it as the adjective “chief.” But the accurate translation renders it as a proper noun: Rosh. This is an ancient name for the people who became known as Rus—Russia.

So the identity of this “prince” of Russia, Moscow and Tobolsk begins to take clear shape: The listing of all three names confirms that this is one man presiding over all the various peoples across Russia—from west to east.

The mention of Magog shows that this man’s leadership goes beyond the borders of Russia and into China. Verses 5-6 mention ancient names for the peoples of such nations as India and Japan, showing that these countries will also lend their military power to this Russia-led alliance.

When these Bible passages are studied alongside current events in Russia, the identity of this “prince of Russia” becomes clear. In the September 2014 Trumpet, editor in chief Gerald Flurry wrote: “I strongly believe Vladimir Putin is going to lead the 200 million-man army. Just look at the power he already has. Can you think of any other Russian politician who could become so powerful and have the will to lead Russia into the crisis of crises? I see nobody else on the horizon who could do that.”

By the time he wrote The Prophesied ‘Prince of Russia’ in 2017, Mr. Flurry was still more certain that Putin would personally fulfill this role. “His track record, his nationality and his ideology show that he is fulfilling a linchpin Bible prophecy,” he writes. “The time frame of his rule also shows that nobody else could be fulfilling the Ezekiel 38 and 39 prophecy.”

It is clear that a bleak future is coming for Russia, Ukraine and the world. But Mr. Flurry says the fact that this “prince of Russia” is on the scene shows that the most hope-saturated event in mankind’s history is now near. “Vladimir Putin is a sign, literally a sign, that Jesus Christ is about to return!” he writes in his booklet. “This is one of the most inspiring messages in the Bible. What we are seeing in Russia ultimately leads to the transition from man ruling man to God ruling man!”