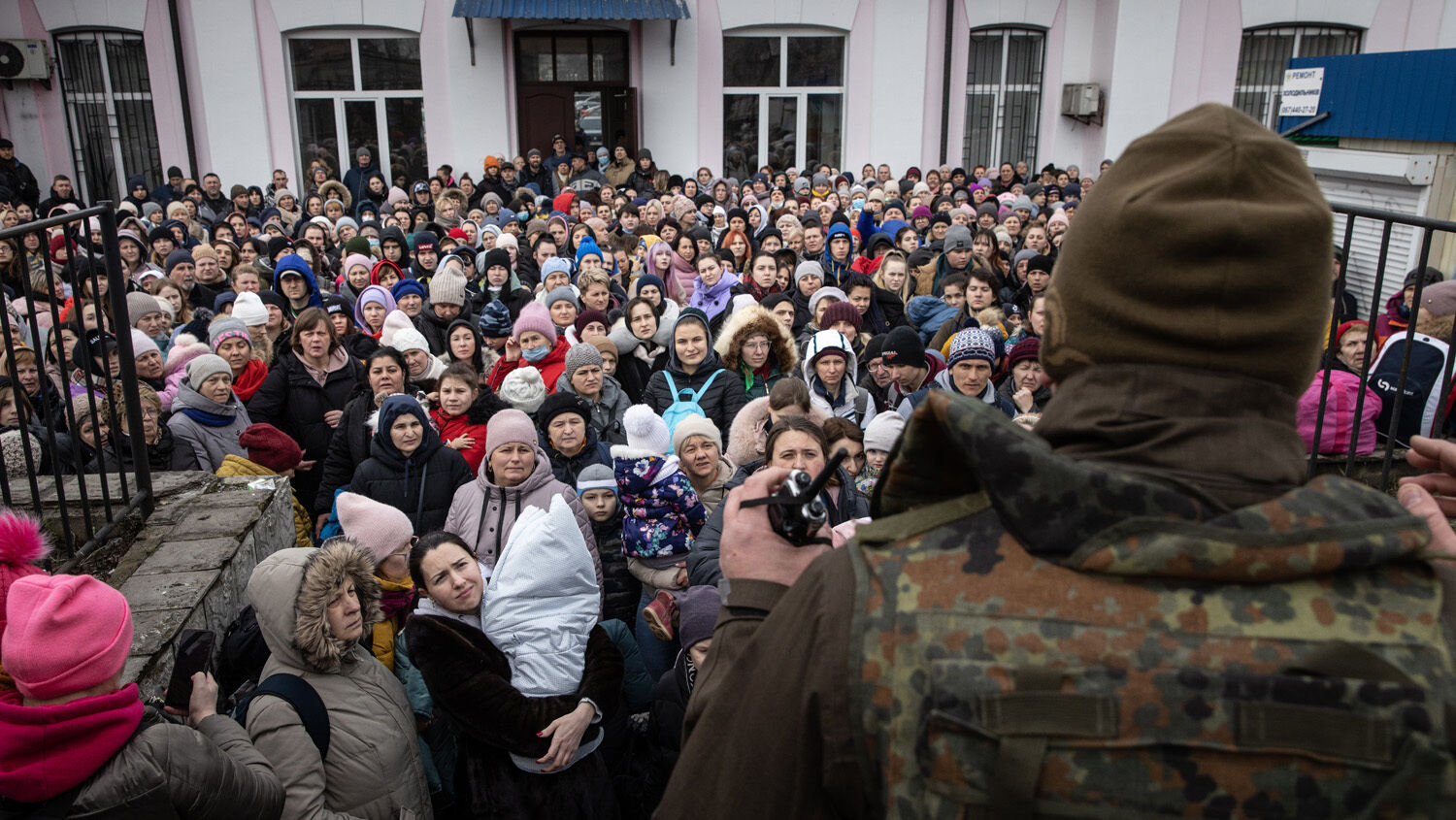 Women and children prepare to board an evacuation train from Irpin City to Kyiv on March 4 in Ukraine.
Chris McGrath/Getty Images

One third of Ukraine’s prewar population have fled their homes.

On February 23, the day before Russia’s full-scale invasion began, Ukraine was a country of 44 million people. But since then, more than 6.6 million have fled the nation, bringing its population down to 37.4 million. That’s the largest movement of people in this kind of time frame ever recorded in human history.

This exodus constitutes a larger movement even than the exodus of Israel during the time of Moses, and it may still be nowhere near its end.

In addition to the 6.6 million Ukrainians who have left Ukraine, another 8 million have been displaced within the country. The two groups add up to one third of the total prewar population that have fled their homes.

To give these numbers some perspective, in 2015, when Europe was suffering the migrant crisis from the Middle East, there were some 1.3 million refugees who came in. That was one of the biggest stories of the decade. But those 1.3 million migrants entered Europe over the course of the whole year. The Ukrainian exodus is five times that number and has happened in just three months.

The bulk of these Ukrainians have gone west into Europe, mainly into Poland, Hungary, Slovakia, Moldova, the Czech Republic and Romania. And since the first three in that list are part of the Schengen area, there are no internal border controls between them and other European Union nations, so many Ukrainians have continued further west into other European countries.

One major difference between the Ukrainian refugees pouring into Europe this year and those who entered from the Middle East and Africa in the mid-2010s is that they are of exactly the opposite sex ratios. The Middle Easterners and Africans were overwhelmingly men because Muslim women, who comprised just 16 percent of total migrants, seldom have the religious freedom or resources to brave the trip. The Ukrainians, by contrast, are made up of 90 percent women and children, largely because Ukrainian men are staying behind to fight the Russians.

Tens of thousands of Ukrainian refugees have also fled north into Belarus. This is a problematic destination for those seeking refuge from the tyranny of Russian President Vladimir Putin, since he has recently accomplished a soft annexation of the country, but circumstances have compelled many there.

Many Ukrainians have also gone east into Russia itself, with the bulk of these having been forced there against their will. Ukraine’s Ombudsman for Human Rights, Lyudmyla Denisova, reported that as of May 26, Russian invasion forces have deported more than 1,377,000 people to Russia, including 238,329 children.

Great numbers of these are sent to remote towns across Russia, with some confirmed to be as far off as Vladivostok on Russia’s Pacific coast—some 5,500 miles from Ukraine. The Russian leadership understands that shipping impoverished people across such distances makes it unlikely that they will even find the means to return home, particularly in the case of children who have been torn away from their families.

Denisova warned on national television that these kidnapped Ukrainian children are likely to be indoctrinated by the Kremlin, just as Russian children are: “When our children are taken out, they destroy the national identity, deprive our country of the future. They teach our children there, in Russia, the history that Putin has told everyone.”

According to the 1949 Geneva Conventions, the mass transfer of civilians during conflict to the territory of the occupying power is a war crime. But Russia is currently suffering a demographic collapse, with its people failing to multiply at sustainable rates. So war crime or not, Putin is forcibly relocating hundreds of thousands of Ukrainians to locations within his borders.

Asked what keeps him up at night, Vladimir Putin identified one problem: Russia’s population decline and the threat it poses to the country’s economy.

The Trumpet keeps a watchful eye on Vladimir Putin and his grip on Russia and nations such as Ukraine because of Bible prophecy. Revelation 9:16 describes Asia amassing a colossal army of 200 million troops, 15 times the size of the largest army ever assembled in human history. This Asian force is described as conducting operations during a third world war that will dwarf all previous wars. Ezekiel 38 and 39 show that at the helm of this gargantuan force will be a man called the “prince” of Russia.

Trumpet editor in chief Gerald Flurry has identified Vladimir Putin as this prince. In his 2017 booklet The Prophesied ‘Prince of Russia,’ he writes: “This world has a lot of authoritarian rulers. But Vladimir Putin is one we need to keep a particularly close eye on. His track record, his nationality and his ideology show that he is fulfilling a linchpin Bible prophecy. The time frame of his rule also shows that nobody else could be fulfilling the Ezekiel 38 and 39 prophecy.”

Mr. Flurry’s booklet explains that Putin’s leadership of Russia, including his ruthless campaign to conquer Ukraine, shows that the world is barreling toward a time of violence and calamity far worse than anything in humanity’s calamitous history.

But Mr. Flurry emphasizes that there is also great hope connected to these prophecies. He writes that the fact Putin is now leading Russia in such a dangerous direction proves that the most hope-filled event in mankind’s history is near. “What we are seeing in Russia ultimately leads to the transition from man ruling man to God ruling man!” he writes. “And it is almost here! It is just a few short years away.”

To better understand the dangers of Putin’s Russia and the hope that is laced into these developments, order your free copy of The Prophesied ‘Prince of Russia.’