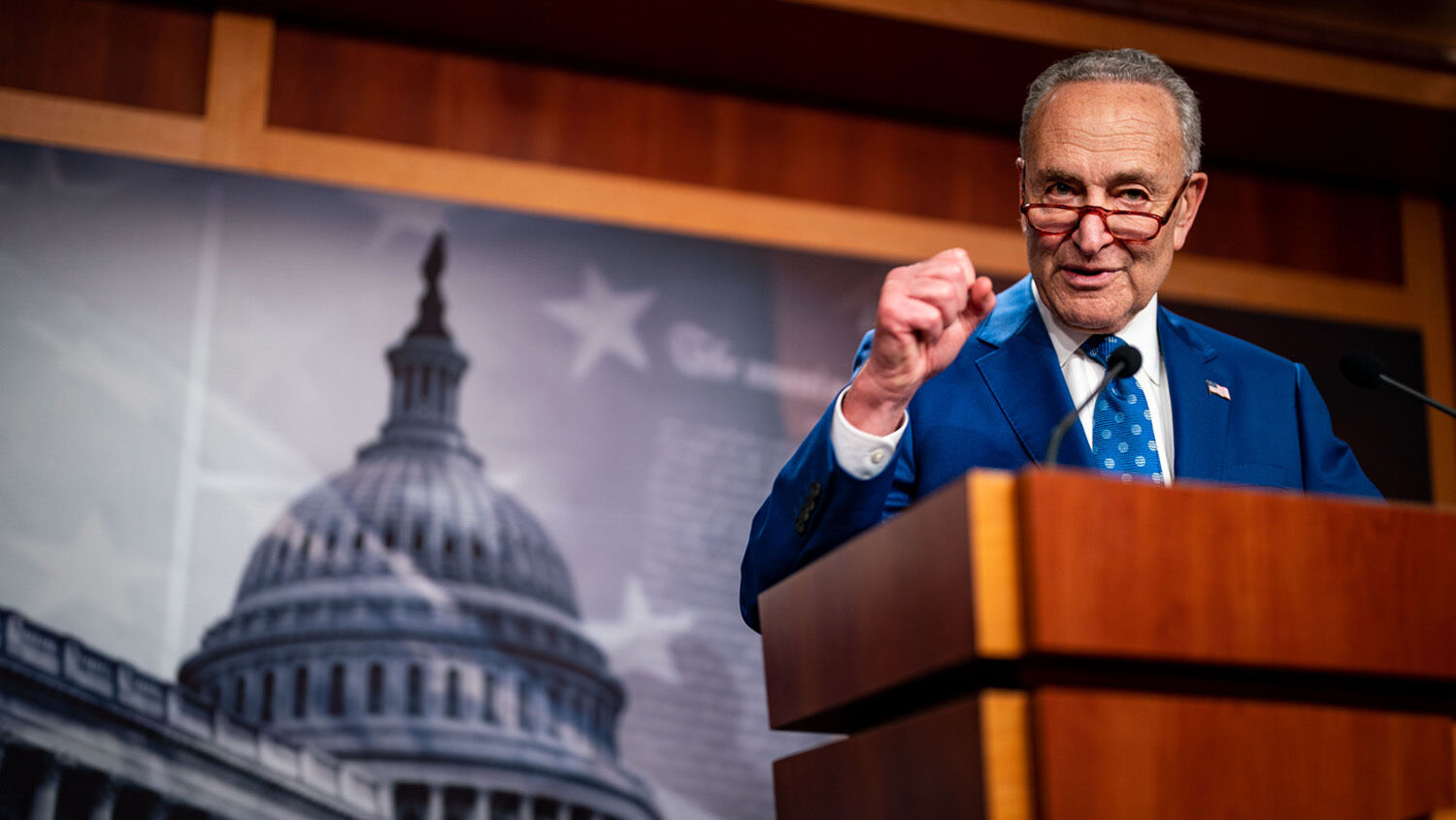 Senate Majority Leader Chuck Schumer speaks during a news conference on the passage of the Inflation Reduction Act at the U.S. Capitol on August 7.
Kent Nishimura / Los Angeles Times via Getty Images

The Biden administration is doubling down on Orwellian doublespeak.

When he was campaigning for the United States’ presidency, Joe Biden told supporters in New Hampshire, “I guarantee you we’re going to end fossil fuels.” His administration is preparing to keep this promise using one of the most egregious examples of doublespeak ever. On August 7, Senate Democrats passed the Inflation Reduction Act in a 51-to-50 vote. The bill now awaits passage by the House of Representatives. Despite its name, this bill does nothing to reduce inflation.

Instead, the Inflation Reduction Act will likely increase near-term inflation as it seeks to combat climate change. Time magazine contributor Justin Worland hailed this bill as “the most significant climate legislation in U.S. history” and noted that it will probably put “the country within reach of the Biden administration’s goal of slashing emissions in half by 2030 when compared to 2005 levels.” How will this legislation accomplish this? By spending more than $360 billion on energy and climate change programs over the next decade, including enormous tax incentives to buy electric vehicles.

The Inflation Reduction Act will also extend Obamacare subsidies that were supposed to expire this year, fund drought relief, impose a 15 percent corporate minimum tax rate for companies with higher than $1 billion of annual financial statement income, and empower the Internal Revenue Service to hire 87,000 more agents. Regardless of how you feel about these changes, none of them will do anything to reduce inflation in the United States.

Even self-avowed socialist Sen. Bernie Sanders has admitted that the name of the Inflation Reduction Act misleads more than informs. At the same time, the conservative Heritage Foundation predicts that the act will increase near-term inflation and depress household incomes by racking up $52.5 billion in debt over the next four years.

“The bill is about as far away from a genuine Inflation Reduction Act as possible,” wrote senior policy analyst Richard Stern for the Heritage Foundation. “Though it would be harmful under any circumstances, signing it into law during a period of stagflation would be the worst possible timing. … When the federal government runs a deficit, it eventually must be paid back. That’s either done through job- and wage-killing taxes or by way of the Federal Reserve printing new money to finance the deficits. During the height of the covid-19 pandemic, the Fed financed 56 percent of new federal debt with trillions upon trillions of newly created dollars. Those dollars devalued paychecks and Americans’ lifetime savings.”

The Ivy League economists working for the Biden administration must know that deficit spending and new hires at the Internal Revenue Service do not tamp down inflation. But they still named “the most significant climate legislation in U.S. history” the “Inflation Reduction Act” for two reasons. First, they know that most Americans care more about inflation than climate change. Second, they know most Americans do not read the contents of congressional bills. So, the radical Biden administration hopes voters will think it is fighting inflation when it is really trying to drive up the price of fossil fuels.

“The idea that its inflation reduction is something out of George Orwell,” Fox Business host Larry Kudlow told conservative political commentator Sean Hannity on August 4. “So, I don’t believe a word of it. … They’re boosting federal spending on the demand side. They’re killing the supply side because of the taxes. It’s a terrible mix. We shouldn’t be doing it.”

Kudlow is right. Calling a bill that suppresses economic activity with more taxes while simultaneously creating deficits with more spending the “Inflation Reduction Act” is a classic example of Orwellian doublespeak. Yet the Biden administration is resorting to doublespeak to keep Americans oblivious to its real plan. Neither Biden nor his boss, Barack Obama, want to reduce inflation or lower the cost of energy. They want to “end fossil fuels.”

Some analysts have been saying that the Biden administration may have to choose between saving the Earth from climate change and saving the U.S. economy from an energy crisis. But they fail to understand the real motives of the people behind this movement. The goal of elites controlling the climate change conversation is not to reduce carbon emissions but to create a new world order—and to dismantle the current one. To do this, they must attack American dominance in energy and its economy, empower socialist dictatorships, demonize the free market, and destroy individual liberty.

Pollution is a problem that humanity must face. Severe environmental issues like acid rain, soil degradation and urban sprawl are ravaging the world. Yet have you noticed that the radical environmentalist movement rarely discusses these issues? It is fixated on one thing: the theory of man-made global warming being caused by carbon dioxide emissions. Why not devote more attention to smog, pesticides, plastic pollution, contaminated drinking water or ozone degradation?

Encouraging people to take measures to improve their soil, reduce urban sprawl, raise grass-fed cattle in the countryside, and enhance the environment in other ways does not advance their agenda because their agenda is to take power from individuals and give it to government elites. But micromanaging carbon dioxide does advance their agenda, so the Biden administration is passing “the most significant climate legislation in U.S. history” under the pretext of fighting inflation.

After old-fashioned communism failed catastrophically in the 20th century, people were still dedicated to the atheistic theory that humans can create their own utopia by treating everyone like a hive of insects and forcing them to surrender their rights. But they needed a new vehicle since the ideology on its own merits was unattractive to the masses after it helped kill about 100 million people in less than 100 years. Communists deliberately chose radical environmentalism (as well as race relations) to destroy individual liberty and accountability and advance socialism.

“The weaker America is, the more vulnerable it becomes to being controlled,” Trumpet editor in chief Gerald Flurry explained in “What the Paris Climate Agreement Was Really About.” “That is exactly what the radical left wants. It is using the issue of the environment in order to get it. The Obama administration didn’t want to get climate change under control; it wanted to get America under its control! Proponents of deals like this want to control the world. Where does such thinking come from? That is actually a very satanic mindset—explained in many places in your Bible.”

The only way you can explain such rampant deceit in government is that the American republic is being attacked by a group of socialist revolutionaries who have hijacked its government from the inside. To understand how this happened, please request a free copy of America Under Attack, by Gerald Flurry. Across the globe, people are asking: What has happened to the United States of America? This book provides the shocking answer to this vital question.