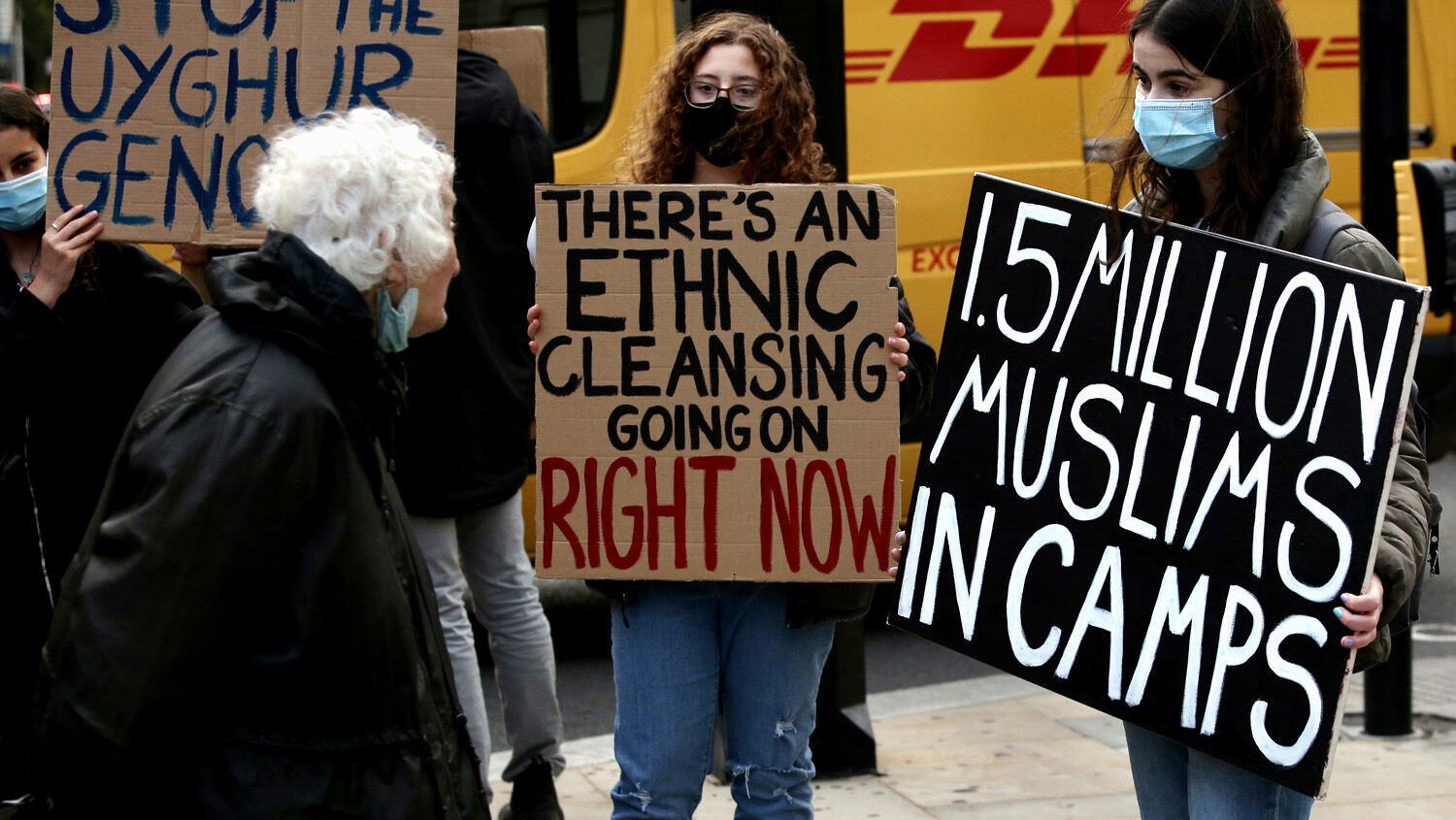 Whether or not the UN caves in, the Chinese are committing egregious crimes against humanity.

China’s leaders are pressuring the United Nations human rights head to refrain from releasing a highly anticipated report on human rights abuses in Xinjiang, according to a document seen by Reuters on July 19.

In May, UN High Commissioner for Human Rights Michelle Bachelet made a controversial tour of Xinjiang, the region where the Chinese government has detained more than 1 million Uyghurs and other Muslims in recent years. The Chinese Communist Party (ccp) claims it is only deradicalizing these people and equipping them with job skills. But evidence shows that many detainees suffer extreme human rights abuses. These abuses include mass use of forced labor, forced sterilizations, forced abortions and even organ harvesting from slain prisoners.

The ccp showed Bachelet only a highly curated, “Potemkin Village” version of Xinjiang. And in the aftermath of the tour, she was lambasted for failing to use the occasion to address the ccp’s evil. “Michelle Bachelet’s refusal to call out the Chinese government’s crimes against humanity has betrayed countless victims and survivors,” said Amnesty International Secretary General Agnès Callamard.

Bachelet has since said she will refrain from pursuing a second term as UN human rights chief. And she has pledged that before her term ends in August, she will publish her report on Xinjiang.

In response to this pledge, the ccp began circulating a document expressing “grave concern” over the report and demanding that it be buried. The ccp’s document states: “The assessment, if published, will intensify politicization and bloc confrontation in the area of human rights, undermine the credibility of the ohchr [Office of the High Commissioner for Human Rights], and harm the cooperation between ohchr and member states. … We strongly urge madame high commissioner not to publish such an assessment.”

The UN’s track record makes clear that it prioritizes appeasement to revisionist nations such as China, even when it comes at the expense of truth, justice and human well-being. So it is difficult to envision the organization publishing a report that exposes and condemns China’s evils in a meaningful way. If the report does see the light of day, it will likely be a whitewashed, Beijing-friendly version.

However Bachelet and the UN proceed, the evidence plainly shows that the Chinese Communist Party is committing egregious human rights violations in Xinjiang.

Last year, then United States Secretary of State Mike Pompeo wrote: “Since at least March 2017,” the ccp has “committed crimes against humanity” and has “committed genocide” against Uyghurs and other Muslim minorities in Xinjiang. Calling it a “systematic attempt to destroy Uyghurs by the Chinese party-state,” Pompeo said he believed this genocide is “ongoing” and represents “an extreme affront to the Uyghurs, the people of China and civilized people everywhere.”

In the time since Pompeo’s landmark statement, China’s abuses have not abated.

Pompeo also pointed out how bizarre it is that this is happening inside China even as ccp leaders “simultaneously assert their country as a global leader and attempt to remold the international system in their image.” He continued: “If the Chinese Communist Party is allowed to commit genocide and crimes against humanity against its own people, imagine what it will be emboldened to do to the free world, in the not-so-distant future.”

This is a chilling reality that the world must face. The crimes against humanity being systematically committed in Xinjiang show that the ccp will stop at nothing to keep amassing more power, neutralizing opposition, and making its power absolute. And Pompeo is right that Xinjiang should be seen as a warning to the whole world.

During His ministry on Earth, Jesus Christ spoke of a global era that would start shortly before His return. Luke 21:24 records Him calling this age “the times of the Gentiles.” In the February 2020 Trumpet, editor in chief Gerald Flurry wrote, “These ‘times of the Gentiles’ are yet to be fully realized. However, we are in the outer edges of this catastrophic storm.”

The term Gentile means “the nations,” or peoples beyond Israelites. The Israelites descended from the patriarchs Abraham, Isaac and Jacob. Modern “Israelites” include the Jewish nation named Israel, but also the United States, Britain and others, which can be understood by reading our free book The United States and Britain in Prophecy, by Herbert W. Armstrong. “Once you understand who Israel is,” Mr. Flurry wrote, “then you can see how the Gentiles—the non-Israelite peoples—have started to take charge of the world already.”

For decades, leadership from America and Britain was a stabilizing and mainly positive force for civilization. This was because of their biblically influenced beliefs in the God-given rights of individuals, the rule of law, and the injustice of government tyranny. Yet America and Britain today have turned dramatically away from God and have lost what moral authority they had and the power to implement it.

During “the times of the Gentiles,” the rule of law and restrictions on government power will disappear. As the Anglo-Saxon nations wane, power-hungry Gentile dictators will become increasingly powerful on the world scene—in two main groups. “While there are many Gentile nations around today,” Mr. Flurry wrote, “when this prophecy is completely fulfilled there will be two major powers—one revolving around Russia and China, and the other around Germany.”

This means the horrors underway in Xinjiang today are only the start. As we watch the Chinese Communist Party grow increasingly dictatorial, not only in China but also in locations such as Hong Kong and Tibet, we see a preview of just how dark the times of the Gentiles will be. As Mr. Flurry wrote, we are now only in the “outer edges” of this new era. But soon these “times” will be fully realized. Then the sort of barbarity now occurring in remote regions of China will happen worldwide. It will surely be a “catastrophic storm.”

In His prognostication about the turbulent days ahead, Christ said “men’s hearts” will be “failing them for fear” (Luke 21:26). But in the next verse, He shows that the evil and oppression will not last long: “And then shall they see the Son of man coming in a cloud with power and great glory” (verse 27).

These surreally brutal times of the Gentiles, which we are already entering into, will be conclusively ended at Christ’s return. He will come back to establish a literal government on Earth. He will return to end, by force, the epoch of tyrants, dictators and totalitarians. He will return to overpower those who abuse the Uyghurs and millions more. He will “save the children of the needy, and shall break in pieces the oppressor” (Psalm 72:4). The Creator of human beings will come back to rule humanity with a rod of iron; to close the curtain on all man’s ignorant, ineffective, violent, insidious, insecure, genocidal governments; and to enforce His law of love and His government of love.

In God’s government, and in His government alone, there is hope for the Uyghurs of the present, the future and even the past—and for all other peoples of the Earth. To understand the Bible’s prophecies about China and the soon-coming perfect government of God, order your free copy of Russia and China in Prophecy.