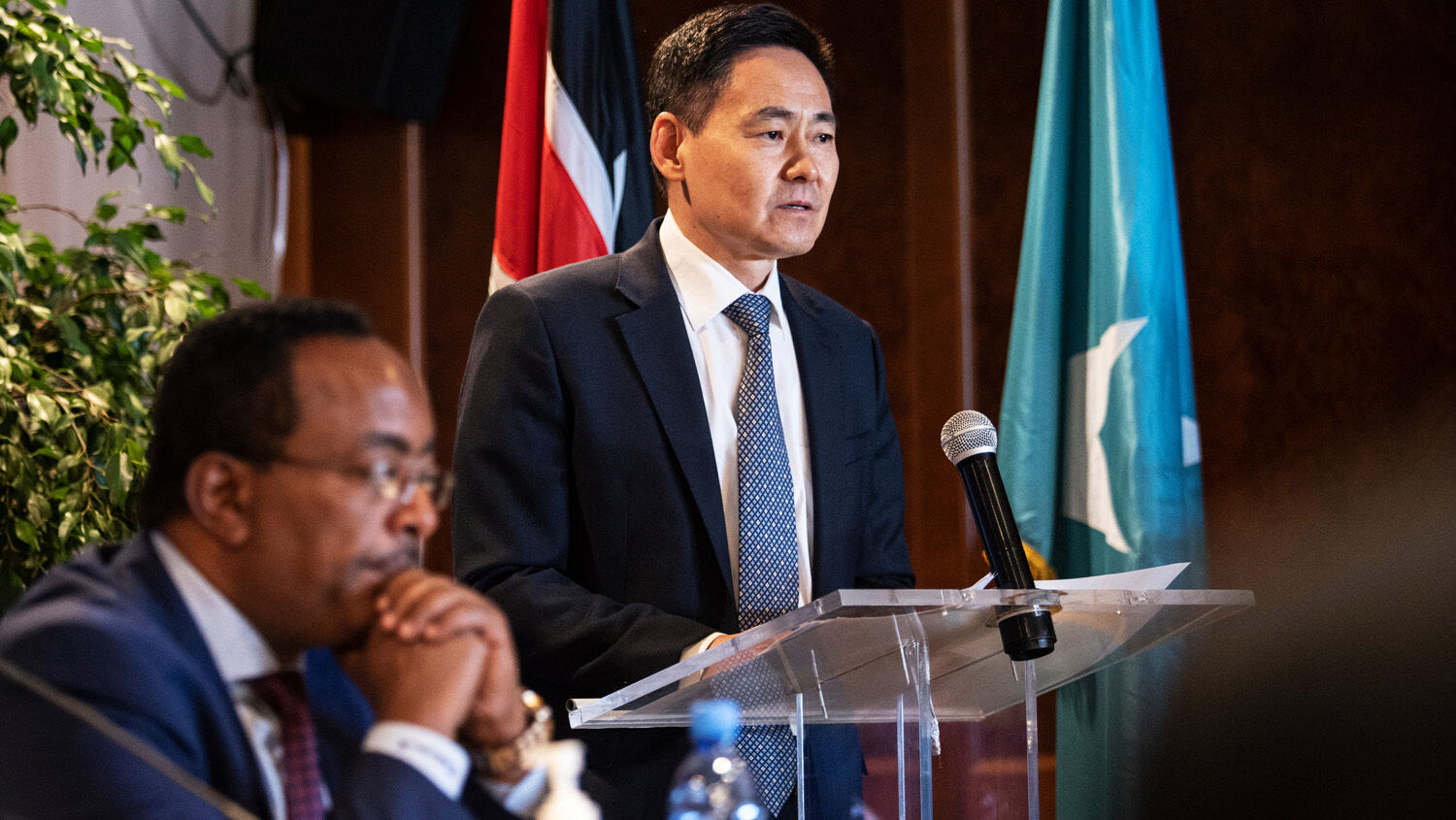 Chinese Special Envoy to the Horn of Africa Xue Bing,speaks as Redwan Hussein, national security advisor to the prime minister of Ethiopia, looks on during the first Horn of Africa peace conference in Addis Ababa, Ethiopia, on June 20.
AMANUEL SILESHI/AFP via Getty Images

What China’s move into the Horn of Africa means

China hosted its first-ever peace conference outside Asia on June 20 and 21 in Ethiopia. New Chinese special envoy for the Horn of Africa Xue Bing met various delegates in Ethiopia’s capital, Addis Ababa. Djibouti, Ethiopia, Kenya, South Sudan, Somalia, Sudan and Uganda were all involved. According to Anadolu Agency, Eritrea was also invited but declined to attend.

Why does the Horn of Africa need a peace conference?

The Horn of Africa has been embroiled in conflict for decades. One of the most major—and recent—is Ethiopia’s civil war, ongoing since 2020. The war doesn’t make the news as much as it used to. The Ethiopian government and its main adversary, the Tigray Defense Forces (tdf), have been observing a ceasefire agreed to in the spring.

Yet just because the worst of the carnage has stopped, it doesn’t mean tensions aren’t still high. The war isn’t fully settled. And in a country where rival ethnic groups are looking to settle old scores, the conflict can’t simply be divided between the government and the rebels. For example, on June 18, there was a massacre of ethnic Amhara in Ethiopia’s Oromia region. The death toll is possibly as high as 320.

Any unrest or geopolitical shifts in Ethiopia would reverberate around the world. Ethiopia is Africa’s second-largest country, with a population of over 100 million. The civil war has so far involved Eritrean and Sudanese soldiers. Ethiopia was an important American partner in fighting radical Islam, like the terrorist group al-Shabaab in Somalia.

Ethiopia and America are still military partners on paper, but one of the biggest effects of the war is the divide it’s caused between Washington and Addis Ababa. To fight against the Tigray, Ethiopian Prime Minister Abiy Ahmed has done everything from using Geneva Convention-banned weapons to creating a famine. This has alienated him from the United States. Since then, he’s been looking for other foreign backers. He has reached out to Turkish President Recep Tayyip Erdoğan. He’s purchased weapons from Iran. And now, it looks like he’s ready to reach out to China.

Xue stated China is happy to be the mediator for regional issues. “What we learn from the lesson of history is that the Horn of Africa must not become the backyard of any country,” Xue said. “Rather, the people of this region should be masters of their own country’s destiny.” These kinds of thinly veiled calls for the West to “keep its nose out of Ethiopia’s business” would resonate with Addis Ababa.

But why is China interested? The Horn of Africa is an unstable backwater. For decades, the region has suffered everything, including revolutions, wars, civil wars, genocide, Islamist uprisings and piracy.

In January, Chinese Foreign Minister Wang Yi made a trip through East Africa. He visited Kenya, the Comoros (an island country in the Indian Ocean) and Eritrea. Eritrea is a new member of China’s Belt and Road Initiative (bri) economic investment program. Wang said China wishes to “step up dialogue within this region to overcome security challenges. The countries and people in the Horn of Africa need to stay free from the major powers’ geopolitical game and to be firm in pursuing unity, solidarity and greater strength.”

China is the world’s second-largest economy but has only been an economic juggernaut for a short while. It doesn’t have the long-established trade links Western powers have had for decades. To catch up, China has been investing heavily in controlling trade choke points. China’s bri helps connect it with developing (and developed) economies all over the world. Beijing is gaining more and more influence over the Panama Canal. It is aggressively expanding its control of the South China Sea.

Beijing might want similar control over the Bab el-Mandeb. Choosing a country as seemingly random as Djibouti for its first confirmed overseas military base shows how important the region is to the Chinese Communist Party.

A prophecy in Isaiah 23 discusses a “mart of nations” (verse 3), or a giant, worldwide trade conglomerate. Several ancient Middle Eastern peoples are referenced as composing this conglomerate. The key to understanding it is the modern identities of these peoples. Verse 1 refers to “Chittim,” an ancient name of China. China is prophesied to play a major part in this “mart of nations.”

Bible prophecy also reveals what this “mart of nations” will do. Deuteronomy 28 is a prophecy about the Israelites. God lists blessings He would give if Israel would obey Him, followed by a list of curses for disobedience. Here is one of the curses: “They [Israel’s enemies] shall besiege you [Israel] at all your gates until your high and fortified walls, in which you trust, come down throughout all your land; and they shall besiege you at all your gates throughout all your land which the Lord your God has given you” (Deuteronomy 28:52; New King James Version).

The key to understanding Bible prophecy is the identities of the modern-day Israelites. They include the people of the modern State of Israel and also America, Great Britain, Canada, Australia and New Zealand. (Please request a free copy of The United States and Britain in Prophecy, by Herbert W. Armstrong, for more information.)

“These ‘gates’ are the maritime ports and passages that world trade flows through, and even land gates in a few cases,” Trumpet editor in chief Gerald Flurry writes in China’s Dangerous Move Against America. “At the height of Britain’s and America’s power in the 19th and 20th centuries, they possessed an astounding number of these locations. When Britain truly ‘ruled the waves,’ its naval forces controlled the Suez Canal, Gibraltar, Malta, the Dardanelles, the English Channel, the Gulf of Aden [the body of water around the Bab el-Mandeb]” and many others (emphasis added).

God prophesies that these “gates” are the ones Britain and America would control, lose and then be attacked from. Their enemies would control these choke points and cut off the English-speaking nations from world trade. Prophecies like Isaiah 23 show that powers like China will fill the void.

However, although the Bab el-Mandeb will fall under the control of a hostile power, that power will not be China.

Daniel 11 states: “And at the time of the end shall the king of the south push at him: and the king of the north shall come against him like a whirlwind, with chariots, and with horsemen, and with many ships; and he shall enter into the countries, and shall overflow and pass over. … He shall stretch forth his hand also upon the countries: and the land of Egypt shall not escape. But he shall have power over the treasures of gold and of silver, and over all the precious things of Egypt: and the Libyans and the Ethiopians shall be at his steps” (verses 40, 42-43).

This is a prophecy dating to “the time of the end.” The rest of the prophecy shows this to be a battle between the empire historically north of the Holy Land (Europe) and a “king of the south” (which is to the south of Europe). This king of the south has a “pushy,” provocative foreign policy, hostile to the West. And it has a proxy empire all over the Middle East and Africa. For decades, we have pointed to a radical Islamist bloc, led by Iran, as the fulfillment of this prophecy. (Please read The King of the South for elaboration.)

Notice that Iran is prophesied to extend its Islamist tentacles into Africa—including Libya and Ethiopia.

“Why would Iran be so interested in getting some measure of control over Libya and Ethiopia?” Mr. Flurry asks in The King of the South. “To me, the answer is intriguing.”

Ethiopia is a majority Christian nation with a history of siding with America. The idea that it would join ranks with a power like Iran may have seemed far-fetched years ago. But China’s peace conference shows Ethiopia is getting tired of America. It’s ready to start shopping for some new allies—even if they have unsavory human rights records. A lot still has to happen before Ethiopia turns Islamist. But the stage is being set for Addis Ababa to shun the West and look for other friends.

Notice also that Mr. Flurry mentioned Djibouti. The Chinese peace conference shows this little country getting more and more attention from the world’s powers. This attention isn’t going to go away.