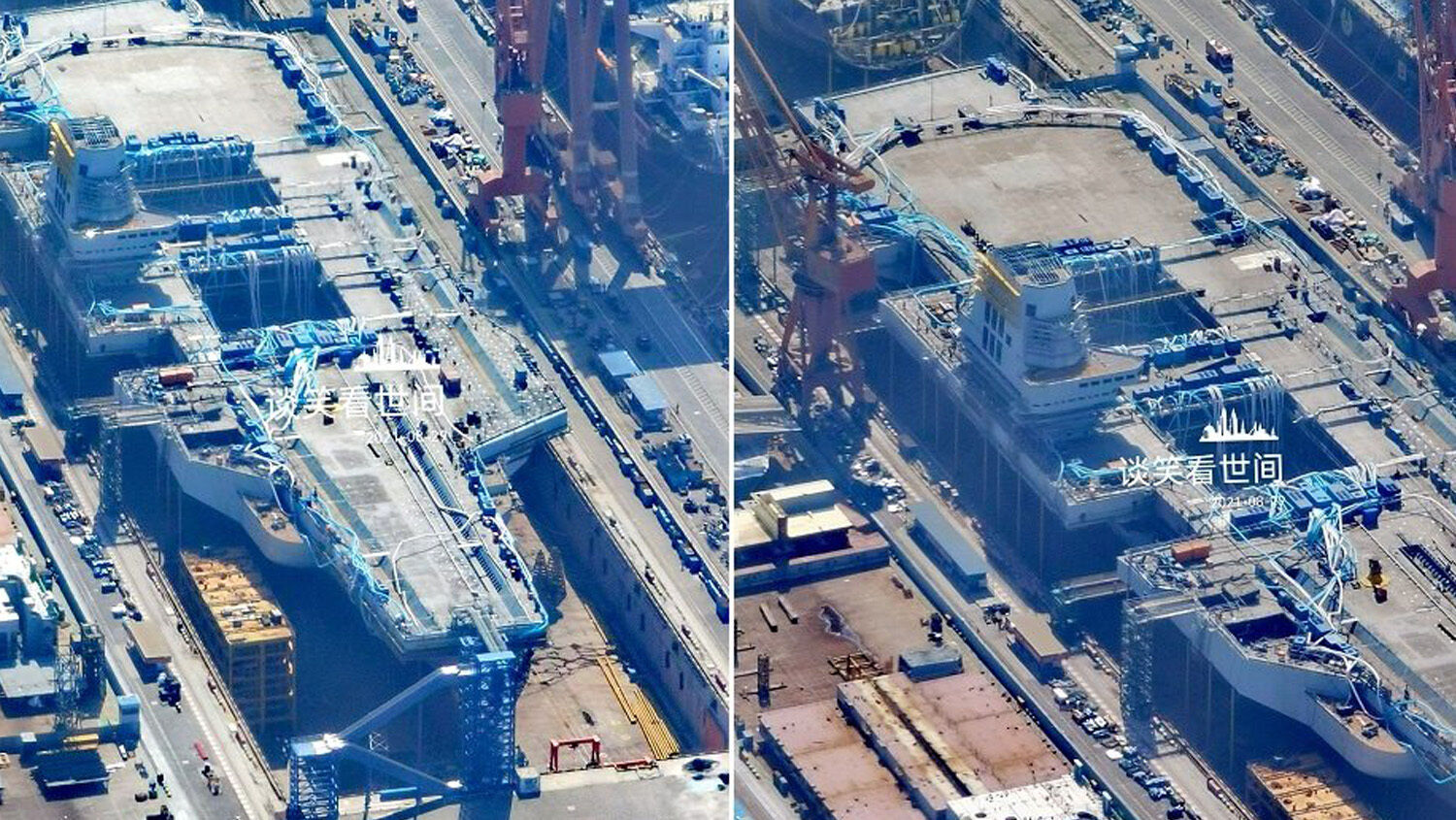 Construction of China’s third and most advanced aircraft carrier is nearly complete, satellite images taken on May 31 by Planet Labs pbc showed.

The indigenous Type 003 carrier has been under construction since 2018 at the Jiangnan Shipyard to the northeast of Shanghai. With an estimated displacement of 80,000 tons, the carrier is considerably larger than China’s first two carriers and is the world’s largest non-American warship. And whereas China’s first two carriers use a “ski jump” to launch aircraft, the Type 003 employs an electromagnetic “catapult”-style system, enabling the launch of heavier jets, increasing the longevity of the aircraft, and facilitating quicker launches.

This vessel represents a major advancement in China’s naval capabilities and a landmark event in General Secretary Xi Jinping’s goal of extending Beijing’s military reach far past its coastlines.

The new satellite imagery shows that equipment just behind the carrier has now been relocated, clearing the way for the dry dock to be flooded so the vessel can be floated. The Type 003 will still need more than a year of sea trials before it is fully operational. Nevertheless, its launch, according to the Center for Strategic and International Studies, represents a “seminal moment in China’s ongoing modernization efforts and a symbol of the country’s growing military might.”

To the United States and its Asian allies, the launch constitutes proof both of China’s increasing military power and its growing determination to enforce—and likely expand—its maritime territorial claims. “With each new aircraft carrier, China is sending a signal that it has no peer among its neighbors,” said Patrick M. Cronin, the head of the Washington-based Asia-Pacific Security Program at the Center for a New American Security.

Also significant is that while China’s first carrier required 13 years to build and develop, and its second required more than seven, the Type 003 will take less than six years in overall development. Meanwhile, China already has a fourth aircraft carrier, of the same class, under construction at its Dalian shipyard.

Besides aircraft carriers, Beijing has also been prioritizing the development of other watercraft designed to support and protect carriers in the event of conflict. A Pentagon report in November said China’s navy had 355 vessels, making it the world’s largest maritime force. By 2030, China is expected to have 460 vessels.

These expansions of Chinese naval power are happening rapidly and will significantly advance Beijing’s goal of asserting control over the South China Sea. This region is where the rise of China’s navy takes on importance in terms of Bible prophecy.

Trumpet editor in chief Gerald Flurry has emphasized China’s increasing control over the South China Sea and how it connects to Bible prophecy. In a July 2016 Trumpet article, he wrote: “[T]he American military is retreating, and other great powers are coming in to fill the vacuum. … China is intimidating the nations of Southeast Asia into submission to its will. … Everything is headed in the direction of war.” Mr. Flurry explained that his understanding of China’s rise is based on Bible prophecy. In Deuteronomy 28:52, God warns Israel that if it fails to turn to Him, He will transfer control over the world’s strategic sea gates to its enemies. Mr. Flurry explained that this is “a prophecy for the modern-day descendants of Israel,” which mainly means America and Britain.

In recent years, China has taken control of the South China Sea and many of the sea gates that allow access to it. And this is happening in locations that just a few short years ago were under the control of the United States and Britain, which shows that the prophecy in Deuteronomy is in the process of being fulfilled. The completion of the Type 003 carrier and other advancements of Chinese naval power could now hasten the fulfillment of these prophecies even more. To better understand the prophetic significance of China’s rise, order a copy of our free booklet Russia and China in Prophecy.