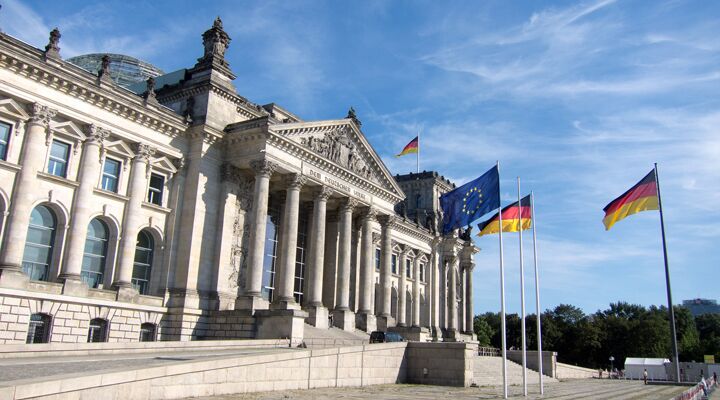 The way that Greece has been manhandled this past week is exposing a new Germany.

Over the past week, we have seen the clearest, most naked display of German aggression since the end of World War ii. Germany, of course, has been ruling the eurozone for years. Der Spiegel even called Germany the new “Fourth Reich” earlier this year. But for the most part, Germany has concealed its dominance behind a fig leaf of consensus.

That ended this week.

Last Sunday, the voice of the Greek people was loud and clear: Greece would not submit to German hegemony. On Monday, Germany ignored the referendum and unilaterally imposed its will on the Greek government. As noted by the EU Observer, “Monday, July 13, will go down in history as the day Greece lost its independence after 185 years of freedom, the day democracy died in the country that invented it ….”

From the left to the right, the mainstream media now sees what the Trumpet has been warning about for years. Greece is now a German colony. Here are some of the conditions Greece must now submit to:

These are the major changes. You could argue that some of them are good changes—or that Greece deserves such harsh treatment. But what you cannot argue, as the EU Observer notes, is that Greece is still a sovereign state!

If the bailout deal is implemented, it is Germany—not Greece—that controls Greece.

Stratfor’s George Friedman sums up the deal this way: “The specifics are less important than the fact that Greece invoked its sovereign right, and Germany responded by enforcing an agreement that compelled the Greeks to cede those rights.”

“It was not the government’s position that troubled Germany the most, but the Greek referendum,” he writes. He says Germany forced the Greek government to capitulate—calling it an “attack” on Greece’s national sovereignty. “The Germans could not accommodate the vote. They had to respond by demanding concessions on Greek sovereignty,” Friedman wrote.

Wolfgang Münchau went so far as to say that Europe has “reverted to the nationalist European power struggles of the 19th and early 20th century.” He wrote in Britain’s Financial Times (emphasis added throughout):

They demoted the eurozone into a toxic fixed exchange-rate system, with a shared single currency, run in the interests of Germany, held together by the threat of absolute destitution for those who challenge the prevailing order. The best thing that can be said of the weekend is the brutal honesty of those perpetrating this regime change.But it was not just the brutality that stood out, nor even the total capitulation of Greece. The material shift is that Germany has formally proposed an exit mechanism. …This was the real coup over the weekend: not only regime change in Greece, but also regime change in the eurozone. …Any other country that in future might challenge German economic orthodoxy will face similar problems.

Germany’s rule extends far beyond Greece. In many ways, the negotiations last weekend were not about Greece. Greece’s economy and debt are too small to cause a real problem for Germany. Instead it is about Spain, Portugal, Italy, even France—the large EU economies that could cause real problems for Germany. Greece tried to defy Germany, and Germany had to make an example of it. Now these other debtor states are much less likely to oppose the German will. If they try to stand up to Germany, they know they will suffer the same fate as Greece.

In the article we quoted earlier, Friedman explains what this means for Europe:

The Germans have long been visible as the controlling entity of the European Union. This time, they made no bones about it. Nor did they make any bones about their ferocity. In effect they raised the banner of German primacy, German national interest, and German willingness to crush the opposition. The French and the Italians, among others, questioned the German position publicly. In the end, it didn’t matter. The Germans consulted with these other governments, but Berlin decided the negotiating position, because in the end it was Germany that would be most exposed by French or Italian moderation. This negotiation was in the context of the European Union, but it was a German negotiation.And with this, the Germans did something they never wanted to do: resurrect fairly unambiguously the idea that Germany is the sovereign and dominant nation-state in Europe, and that it has the power and the will to unilaterally impose its will on another nation. Certainly the niceties of votes by finance ministers and prime ministers were adhered to, but it was the Germans who conducted the real negotiations and who imposed their will on Greece. …[I]n making these moves, Germany crossed two lines. The lesser line was that France and Germany were not linked on dealing with Greece, though they were not so far apart as to be even close to a breach. The second, and more serious, line was that the final negotiation was an exercise of unilateral German power. …The Germans made an example of Cyprus and now Greece. The leading power of Europe will not underwrite defaulting debtors. It will demand political submission for what help is given. This is not a message that will be lost in Europe, whatever the anti-Greek feeling is now.

As we have long predicted based on the sure word of Bible prophecy, this is headed for a smaller, more integrated group of nations, dominated by Germany. The nature of Europe is dramatically changing—and fast!

The world may be shocked by the harshness of German Chancellor Angela Merkel over the weekend. But a lot of Germans want her to be even stronger! On Tuesday, for example, German Finance Minister Wolfgang Schäuble publicly broke with Merkel over the bailouts for the first time over this crisis. He said Greece should have been booted out of the euro.

The Greek referendum hasawakened a beastin the heart of Europe.

For decades, this was the signature prophecy repeatedly proclaimed by Herbert W. Armstrong: the seventh and final resurrection of the Holy Roman Empire—a 10-nation European superstate dominated by Germany.

The euro crisis is helping to bring all of this about.

In August 1950, Herbert Armstrong predicted that “the world will be stunned, dumbfounded, to see Germany emerge suddenly in a power never equaled by Hitler—by a union of 10 nations in Europe, probably including some at present puppets of Russia—in a gigantic United States of Europe. … Soon the ‘United States of Europe’ will emerge, with Germany at its head.”

Those “puppets of Russia” are now part of the EU! We don’t yet see the union of 10 nations—that is coming—but we see Germany clearly as Europe’s head.

In his booklet Germany’s Conquest of the Balkans, Mr. Flurry wrote, “It will not be long before Europe is reunited as the Holy Roman Empire. It will be led very assertively by Germany.” Again, today we see that leadership openly and assertively on the march. In 2011, he wrote:

In May 2010, Germany was forced to bail out Greece’s economy. Last November it rescued Ireland. Other European countries are in the same mess, such as Spain, Italy and Portugal. The economies of these nations, and the future of the entire European unification project, are on life support—and Germany’s fingers are on the power switch!Watch closely. Germany will use this crisis to force Europe to unite more tightly. In the process, some eurozone countries will be forced out of the union. When that happens, the pundits will say European unification is dead, that the European Union has failed. Don’tlisten to them!Every country that leaves the EU puts us one step closer to seeing the German-led 10-nation European superstate!

Later that year he wrote, “Germany has the economic might and the political will to do what it feels must be done, and nobody else does. Whoever controls the money controls the empire.”

At the start of this crisis, he warned, “How the Germans are dealing with the economic crisis is far from democratic! Those nations that can’t or won’t comply will be kicked out of the European Union!”

That is exactly what we have been witnessing over the past week. This, Mr. Flurry wrote, is one of the most significant moments ever in the history of Europe.