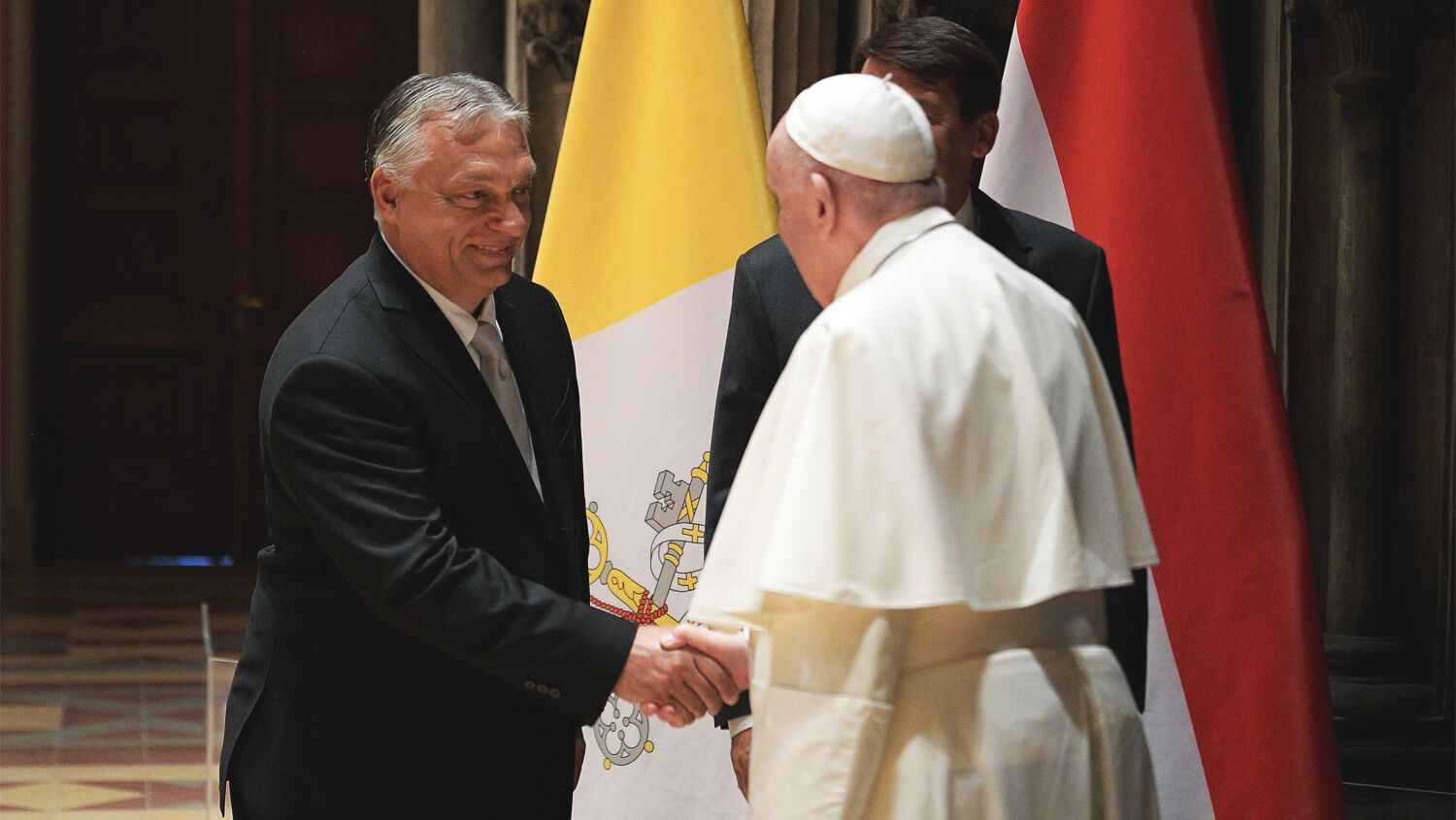 On April 21, two of Europe’s most influential leaders met at the Continent’s most revered holy site. Hungarian Prime Minister Viktor Orbán had a private audience with Pope Francis in Vatican City. This is Orbán’s first diplomatic visit since his election victory on April 3.

The two spoke in the Vatican’s apostolic palace for about 40 minutes. Accompanying the pair was a translator and Orbán’s wife, Anikó Lévai. During the meeting, Francis gave Orbán a medal depicting Martin of Tours, a fourth-century French saint born in what is today Hungary.

Orbán and Francis concluded the meeting in English, with Orbán making an offer for Francis to visit Hungary. “God bless you, your family and Hungary,” Francis said. Orbán responded: “Your holiness, we are waiting for you.”

Orbán choosing the Vatican for his first post-election diplomatic visit is strange. Orbán isn’t Catholic; he is a Calvinist. This also breaks with a precedent he has set in the roughly 12 years he’s been in office: Since 2010, Orbán has made Poland his first diplomatic trip after an election. Both Orbán and Poland’s ruling Law and Justice (PiS) party are right-wing pariahs within the European Union and close allies. Orbán’s Vatican visit suggests his relations with Warsaw are cooling.

Why? Because of the war in Ukraine. Poland has a history of being gobbled up by Russia over the past 250 years. The leadership in Warsaw therefore is terrified by what Russian President Vladimir Putin is doing in Ukraine. Poland is one of Ukrainian President Volodymyr Zelenskyy’s biggest supporters. Orbán, however, is close with Putin and has been reluctant to oppose Moscow. He has rejected putting sanctions on Russia’s energy exports. In his election victory speech, he even named Zelenskyy among the enemies he “overpowered.”

PiS’s leader Jarosław Kaczyński is one of Orbán’s few natural allies in the otherwise liberal democratic Europe. Both are hard-right populists fighting against multiculturalism and both support religion having greater influence in politics. But now, his government is turning against Budapest. Kaczyński bashed Orbán in a radio interview where he suggested Orbán is denying the events of the Bucha Massacre in Ukraine. Orbán’s other right-wing ally, Slovenian Prime Minister Janez Janša, just lost an election and will be leaving office soon. In the recent French election, Orbán backed far-right candidate Marine Le Pen. Le Pen lost to centrist incumbent Emmanuel Macron.

Orbán is finding himself friendless. And he is turning to the Vatican for help.

“The decision to head to the Vatican was probably borne out of necessity,” Balkan Insight wrote on April 22. “Orbán’s Vatican visit suggests he is trying to close the huge gap he has created between himself and other European leaders. Despite his recent landslide victory in the Hungarian election, Orbán is facing headwinds.” Balkan Insight describes how other former allies of Orbán, the Czech Republic and Slovakia, have relatively new prime ministers who are not big fans of his.

On April 5, European Commission President Ursula von der Leyen announced she will launch a mechanism that could lead to economic sanctions on Hungary. The mechanism is designed to punish countries accused of breaching the “rule of law.” Hungary has been accused of this before. The timing of the launch probably has to do with the accusation that Orbán used EU money to rig his election. The mechanism has the potential to withhold billions of euros of EU funding.

In these kinds of situations, Hungary, Poland and Slovenia often stand up for each other against the EU. Now that relations with Poland and Slovenia are cooling, Orbán may feel he is losing some of his protection in Brussels for confrontations like this.

What kind of help is he looking for from the Vatican?

Balázs Orbán, one of Viktor Orbán’s political advisers (no relation), uploaded several Facebook posts relating to the meeting. “The institution of the papacy and person of the Holy Father have played a prominent role in the life of Hungary since the founding of the state by St. Stephen [Hungary’s first king],” he wrote the day before the meeting. “This close bond has been the key to Europe’s renewal on countless occasions. Our common causes continue to bind us together.”

This could be the “close bond” Balázs Orbán—and by extension his boss, Viktor Orbán—is referring to. The Holy Roman Empire is responsible for some of Europe’s worst atrocities, such as the Inquisition and the Wars of Religion against Protestants. Austria-Hungary is partially responsible for starting World War i. Yet Budapest sees this “renewal” as a positive thing.

Francis is a champion of European unity. In 2016, he won the Charlemagne Prize, a prestigious award given to the biggest contributors of European unity. The pope is also notorious for his hostility to the American-led world order and his calls for global financial and political revolution.

Francis and Orbán don’t see eye to eye on many major issues. But perhaps they see each other as useful allies in their goals to remake the world order. Perhaps they want to use each other to create one more “renewal” for Europe.

With his Vatican trip, is Viktor Orbán hoping to use this “key to Europe’s renewal” one more time? Does he want the Catholic Church to help him “bind Europe together” (at least partially) under his influence? When Orbán told the pope, “We are waiting for you,” maybe this was more than just an invitation to visit Hungary. Maybe this was Orbán’s way of saying, We Europeans are waiting for you. I want to rebuild Europe as a strong, Christian, illiberal power bloc. But my natural allies are falling away. I need you to help me bring Europe together under my vision. I need the Vatican to be the key to Europe’s renewal one last time. When Francis told Orbán “God bless you, your family and Hungary,” maybe this was his way of saying, I support your vision of Europe and agree to help you. I accept your offer.

The Philadelphia Trumpet and our predecessor magazine, the Plain Truth, have forecast the unification of Europe for decades. We’ve also forecast that the European nations wouldn’t be able to unite by themselves; they would need some sort of binding force to glue them together.

Herbert W. Armstrong, the Plain Truth’s founder and editor in chief, wrote the following in 1980: “[Europe’s] leaders talk continually of political union—which means, also military. So far they have been unable to bring about full political union. This will be made possible by the ‘good offices’ of the Vatican, who alone can be the symbol of unity to which they can look.”

The cover story for the November-December 2016 Trumpet issue, “Will Europe Rediscover Its Christian Identity?”, stated that Europe’s “Christian, Roman identity solves the two biggest problems facing Europe right now: how to face radical Islam and how to unify the Continent. Nothing else fits the problem that Europe faces today so perfectly. … There is a Catholic Church-shaped hole in the heart of Europe. It’s only a matter of time before a new Napoleon tries to fill it.”

This may look unlikely to some. Modern Europe has been seen as a bastion of secularism for some time. Many feel the era of popes and cardinals presiding over Europe’s politics is over. But the Plain Truth and the Trumpet have been relying on a timeless source—one that affirms this “Catholic Church-shaped hole in the heart of Europe” will be filled. That source is the Holy Bible.

The book of Revelation was written by the Apostle John around a.d. 90, at the height of the old Roman Empire. In chapter 13, John writes about a “beast,” a biblical symbol for an empire. It has incredible war-making power (verse 4). It persecutes and martyrs God’s people (verse 7). It has great authority and rules the known world (verses 2, 8). Pairing this chapter with related prophecies in Daniel 2 and 7, the identity of this beast becomes clear: the Roman Empire. (For more information, please request a free copy of Herbert W. Armstrong’s Who or What Is the Prophetic Beast?)

Rome fell centuries ago. How is this prophecy relevant to modern Europe? Notice that the beast has seven heads and 10 horns (verse 1). This is an important detail that ties Revelation 13 in with another prophecy in Revelation 17.

Like in Revelation 13, chapter 17 features a “beast” (empire) with seven heads and 10 horns (verse 3). But there is something very different about this beast. This beast is ridden by a “woman,” a biblical symbol for a church (see Ephesians 5:22-32 and 2 Corinthians 11:1-3). This woman is dressed in lavish apparel and is extremely wealthy (Revelation 17:4). She has influence over many peoples around the world (verse 15). She reigns from a “great city” situated on seven hills (verses 18, 9).

The Trumpet identifies this “woman” as the Roman Catholic Church.

Revelation 17 interprets the seven heads as seven kings, or incarnations of the Roman Empire, consecutive from each other (verse 10). Verse 14 shows that the last incarnation will be on the scene at Christ’s Second Coming, a yet-future event.

That means there is one more resurrection to come.

Revelation 17 gives another important detail about the last of these resurrections: “And the ten horns which thou sawest are ten kings, which have received no kingdom as yet; but receive power as kings one hour with the beast” (verse 12). The last resurrection will be made up of 10 independent nations pooling their strength together into one supranational empire. And like the previous resurrections, they will be guided by the “woman.”

We expect Hungary to be one of these 10 kings. “Is the acceptance of Orbán’s dictatorship in the EU a sign that the time has come for Europe’s 10 kings to emerge?” Trumpet editor in chief Gerald Flurry asked in his article “Coronavirus and the Holy Roman Empire.” “It is almost certain that Hungary will be part of the coming 10-nation European superpower.” The Vatican meeting shows that the Catholic Church has also accepted Orbán’s place in Europe. And it looks like Orbán and the papacy are ready to work together more often—to give Europe one last “renewal.” History proves that this doesn’t bode well for Europe or the world.

If you would like to learn more, please read The Holy Roman Empire in Prophecy, by theTrumpet.com managing editor Brad Macdonald. It helps put the news from Europe and the Vatican in its proper historical and prophetic perspective. It can help inform you about the direction modern Europe is taking. Request your free copy today.