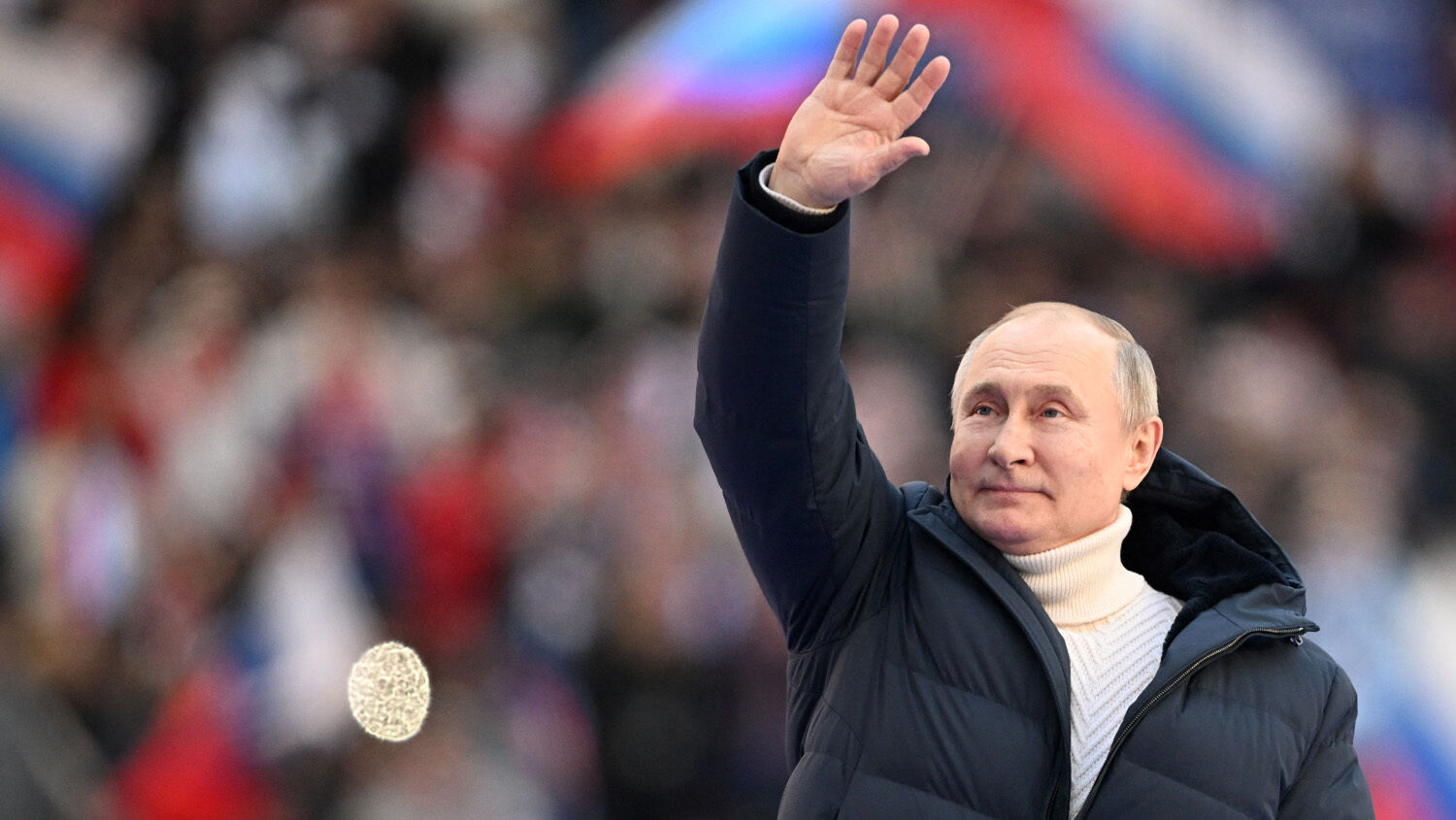 Russian President Vladimir Putin greets the crowd at a concert marking the eighth anniversary of Russia’s annexation of Crimea at the Luzhniki stadium in Moscow on March 18.
Kremlin Press Office / Handout/Anadolu Agency via Getty Images

If you asked a random person who the human leader of Christianity is worldwide, you would receive a variety of answers. A Catholic might point to the pope. An Anglican might suggest Queen Elizabeth ii, supreme governor of the Church of England. Many might not be able to answer.

Now, imagine you went back in time 150 years ago to Istanbul, Saint Petersburg or Belgrade. If you asked this same question to people on the street, the answer would be obvious to many: the Russian czar.

Ever since the fall of Constantinople to the Turks in 1453, Russia gained a special status in the Eastern Orthodox world. It was the largest Orthodox country and the only one free from the Muslim Turks. Moscow was called the “third Rome,” replacing Rome and Constantinople as the spiritual capital of the world. In a 1774 treaty with the Turks, Russia claimed spiritual jurisdiction over the empire’s Orthodox subjects, which would have been everybody from the Balkans to the Middle East. When Russia helped liberate Bulgaria from the Turks in the late 19th century, the Bulgarians were so grateful they named their new national cathedral in Sofia after Alexander Nevsky, patron saint of the Russian military.

The head of the Russian Orthodox Church was the czar. The czars are now history, but Russia still has an informal designation as the center of the Orthodox world.

Russian President Vladimir Putin’s war in Ukraine is changing that.

Russian Orthodox Patriarch Kirill is vocally supportive of the invasion, calling Ukrainian opposition, “evil forces who have always fought against the unity of Russia and the Russian Church.” He prayed for “the Lord [to] preserve the Russian land.” He elaborated: “When I say ‘Russian,’ I … [mean] the land which now includes Russia and Ukraine and Belarus and other tribes and peoples.”

Most others in the Orthodox world don’t agree with Kirill’s statements. Patriarch of Constantinople Bartholomew i, the figurehead “first among equals” in the Orthodox Church, called the invasion an “unprovoked attack” and a “violation of human rights.” Orthodox Church of Ukraine leader Epiphanius i said “the spirit of the antichrist operates in the leader of Russia.”

But what may be most surprising is how much backlash Kirill is getting from within the Russian Orthodox Church itself.

Its parish in Amsterdam, the Netherlands, has announced it wishes to sever ties with Moscow and move under the patriarch of Constantinople. “The clergy unanimously announced that it is no longer possible for them to function within the Moscow patriarchate and provide a spiritually safe environment for our faithful,” a statement on the parish’s website read. “This decision is extremely painful and difficult for all concerned.” The parish needs permission from both the Russian Orthodox Church and the Patriarchate of Constantinople.

Even more surprising is the opposition from the head of the Russian Orthodox Church within Ukraine. Metropolitan Onufry Berezovsky wrote in an online statement: “To the greatest regret, Russia has started military actions against Ukraine and at this fateful time I urge you not to panic, be courageous and show love for your homeland and for each other.” He asked Ukrainian Russian Orthodox Christians to pray for Ukraine’s military. He even appealed to Putin to stop the war. “The war between [Ukrainians and Russians] is a repetition of the sin of Cain, who killed his own brother out of envy,” he said. “Such war has no justification, neither with God nor with people.”

The Russian Orthodox Church’s leader in Lithuania, Metropolitan Innocent of Vilnius, also distanced himself from Moscow. He said that Kirill’s “political statements about the war” were “personal opinion” not accepted by others. He said the church in Lithuania under him would “strive for greater church independence.”

Putin’s actions have caused an Orthodox rift that’s unlikely to be healed. Georgy Kovalenko, the Russian Orthodox Church’s former spokesman in Ukraine, wrote in a Facebook post: “By his actions, Putin has already excommunicated himself from Christianity, along with those who bless him for this war.”

Not all Orthodox churches are upset with Kirill. Orthodox Christians in Serbia and Syria are close to Russia politically as well as religiously. But the Ukraine war seems to have confirmed the schism between the Russian Orthodox Church and much of the rest of Eastern Orthodoxy.

This now poses a dilemma for Orthodox Christians outside of Russia. The religion’s traditional leading nation has divorced itself from Constantinople and taken tens of millions of Orthodox Christians with it. Eastern Orthodoxy is finding itself leaderless and its membership gutted. It still has the patriarch of Constantinople, but the patriarch’s role as a “leader” is mostly ceremonial and Bartholomew lacks real power.

So who will the Eastern Orthodox Church turn to for leadership?

While relations with Kirill are fraying, Bartholomew has a good working relationship with Pope Francis. Both leaders are major advocates for Eastern Orthodoxy and the Catholic Church to restore communion. The pope is also on good terms with the heads of both the Church of Greece and the Church of Cyprus, the same churches Kirill severed relations with. Much of the Orthodox world seems to be closer to the pope than to the Russian Orthodox Church.

Vladimir Putin’s war in Ukraine may be the catalyst needed to reunite Rome and Constantinople. The Russian president may inadvertently become the man responsible for one of the biggest religious turning points in history.

One reliable source says Rome and Constantinople will reunite. It’s a source that both Catholic and Orthodox Christians claim as their heritage. That source is the Holy Bible.

Isaiah 47 prophesies about the “virgin daughter of Babylon” (verse 1). In biblical symbolism, a woman is a symbol of a church (e.g. 2 Corinthians 11:1-3; Ephesians 5:22-33). Babylon was the political and religious capital of the ancient world. This “virgin daughter” fulfills a similar role. Isaiah 47:1 shows that this church sits on a “throne.” Verse 5 refers to it as “the lady of the kingdoms.”

This woman is the Roman Catholic Church.

Notice verse 8: “Therefore hear now this, thou that art given to pleasures, that dwellest carelessly, that sayest in thine heart, I am, and none else beside me; I shall not sit as a widow, neither shall I know the loss of children.”

If this “woman” is the Catholic Church, then who are her “children”? The churches that split from her long ago and have since grown up. The Eastern Orthodox Church is one of the biggest.

Here is what the Plain Truth, our predecessor magazine, wrote regarding prophecies like Isaiah 47 in the November 1963 issue:

The final—albeit short-lived—triumph of Catholicism is recorded in literally dozens of Bible prophecies. Right now—whether we want to believe it or not—the stage is being set for the greatest revolution in religion the world has witnessed. … The mighty problem of achieving unity is twofold. First, it involves reconciliation of the Orthodox Schism that officially commenced in 1054 and divided the churches in the East …. Second, it involves restoration to the Roman Communion all Protestantism which developed from 1517 onward.

The exact details on how this will play out remain to be seen. The relations between Rome and Constantinople have only grown closer. And the Ukraine war is pushing Orthodox Christians closer and closer to the West.

To learn more about the Bible-based forecasts by the Plain Truth led by editor in chief Herbert W. Armstrong, please request a free copy of our booklet He Was Right. Please read Chapter 3, “Returning to the Fold,” for more information about the coming Catholic-Orthodox reunion.

CORRECTION: An earlier version of this article cited 2 Corinthians 13:1-3. That should have been 2 Corinthians 11:1-3. The Trumpet regrets the error.