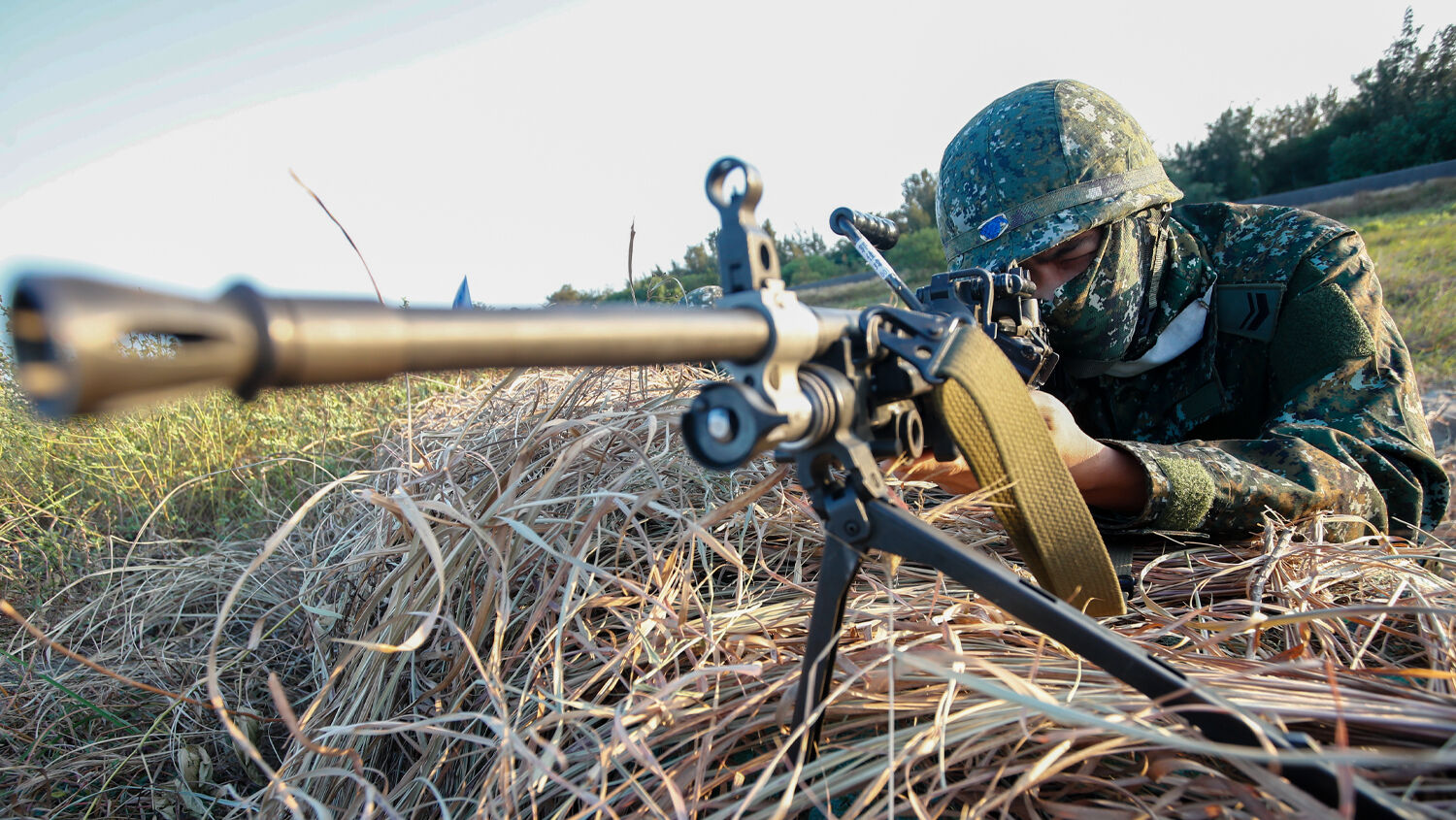 A soldier holds his machine-gun in position during a military exercise simulating the defense against the intrusion of Chinese military in Tainan, Taiwan.
Ceng Shou Yi/NurPhoto via Getty Images

If the U.S. can’t deal with Russia, what can it do if Russia and China make their moves at the same time?

China sent 39 military aircraft into Taiwan’s air defense identification zone on January 23. This is the largest incursion since China sent a record 56 planes to buzz the island on October 4. Among the Chinese planes on January 23 was an H-6 nuclear bomber. A nation’s air defense identification zones extends beyond its sovereign national airspace and provides its military time to identify threats. Chinese planes have yet to actually enter Taiwanese airspace.

The forays occurred after two American aircraft carriers conducted drills with a Japanese destroyer south of Okinawa, near Taiwan.

China reportedly has also been maintaining a naval presence of at least one warship between Japan and Taiwan.

Taiwan was a former Japanese territory awarded to China after World War ii. In 1949, Communist revolutionaries emerged victorious from a protracted civil war, having conquered all of mainland China, overthrowing its nationalist government and establishing the now-infamous regime of the Chinese Communist Party. Nationalist forces evacuated to the island of Taiwan and preserved Republic of China rule there, better known as Taiwan. Technically, both the Communists on the mainland and the free democratic people on the island claim to be the rightful government of all mainland China and Taiwan. For more than 70 years, Communist China has since sought to bring Taiwan under its control.

In the midst of last year’s provocations, the Trumpet asked in its November-December issue, “Will China Soon Conquer Taiwan?” The timing of the latest provocations is especially interesting. They coincide with another conflict occurring at the other side of Eurasia: Russia’s threatened war with Ukraine. After warring against Ukraine for years, Russian authoritarian Vladimir Putin has deployed more than 100,000 troops on Ukraine’s eastern border, threatening the biggest war in Europe since World War ii. The United States, Britain and other countries have sent Ukraine weapons. But any intervention by Western powers seems off the table, despite America’s pledge in the 1994 Budapest Memorandum to protect Ukraine from aggression such as this.

Putin can sense America’s weak will and is taking advantage of it. Even if he doesn’t actually invade Ukraine (and there is evidence to suggest that he is interested in a different prize for now), Putin is winning a different victory. He is showing Europe that American security promises are hollow. This will give him leverage to do what he wants, possibly Continent-wide.

China is one of Russia’s closest international partners. Chinese President Xi Jinping said last month that the China-Russia “relationship even exceeds an alliance.” Xi is taking note of the success Putin is having in Eastern Europe and may be playing a similar game in Asia.

“The inadequate response to the threat to Ukraine will be a dress rehearsal for China and Taiwan,” read a letter published by the Wall Street Journal. “No one should think that China will fail to learn its lessons.”

“Beijing may be watching how the situation is playing out,” Settimana, an Italian Catholic-sponsored news service, wrote. “If the U.S. shows weakness there, Beijing might get the message that America is not willing to draw a line with Russia and maybe not even with China. On the other hand, if the U.S. or the West gets bogged down in a conflict in Ukraine, then Beijing may think that Washington is distracted from the Asian front.”

America has made clear it isn’t going to send troops to confront Russia, despite the 1994 declaration. Washington doesn’t technically even recognize Taiwan as a sovereign country. If America won’t defend Ukraine, why would it defend Taiwan?

Russia and China are becoming the world’s biggest geopolitical tag team. They are coordinating each other’s attacks against a single competitor: America. They may be testing different American partners in different parts of the world. But these challenges are a part of the same confrontation: a unifying Asian power bloc pushing America out of the world.

This corresponds exactly with what the Trumpet wrote regarding America’s bungled withdrawal from Afghanistan.

In “Why Russia and China Are Rejoicing,” we asked the following question: “Who are the main victors of America’s chaotic Afghanistan withdrawal?” The immediate winners would obviously be the Taliban. “But in the broader geopolitical picture,” we wrote, “the even bigger winners are China and Russia.”

Beijing and Moscow saw that Washington didn’t have the will to win a war against a ragtag group of Afghan mountain men. So why would it have the will to confront two of the most powerful militaries on the planet?

China’s state-run news agency Global Times asked last August. “[H]ow many lives of U.S. troops and how many dollars would the U.S. sacrifice for the island of Taiwan? … From what happened in Afghanistan, [Taiwan’s leaders] should perceive that once a war breaks out in the Straits, the island’s defense will collapse in hours and the U.S. military won’t come to help.”

“Chinese officials previously spoke in terms of ‘if’ war breaks out,” we wrote. “Since the Afghanistan withdrawal, they speak of ‘once’ a military conflict erupts.”

We also predicted that Russia would become bolder in its fight against Ukraine, writing:

The U.S. abandoned its Afghan allies to “the whim of fate,” said Nikolai Patrushev, secretary of Russia’s Security Council and a close ally of Putin, during an August 19 interview with Izvestia. Ukraine’s leaders are “obsequiously serving the interests of its overseas patrons, striving to get into nato,” Patrushev said. “But was the ousted pro-American regime in Kabul saved by the fact that Afghanistan had the status of a principal U.S. ally outside nato?” Obviously not. He continued: “A similar situation awaits supporters of the American choice in Ukraine.”

Since the conclusion of World War ii, America has been the primary security guarantor in both Europe and East Asia. It was American will and American firepower that protected Europe from Soviet tanks. It was the U.S. that protected states like Taiwan and South Korea from Communist takeover.

Putin’s and Xi’s actions suggest they want bigger prizes than slivers of territory. They’re out to undo the post-1945 world order. And their plan seems to be working.

To learn more about what this means for America—and the world—please read “Why Russia and China Are Rejoicing.”